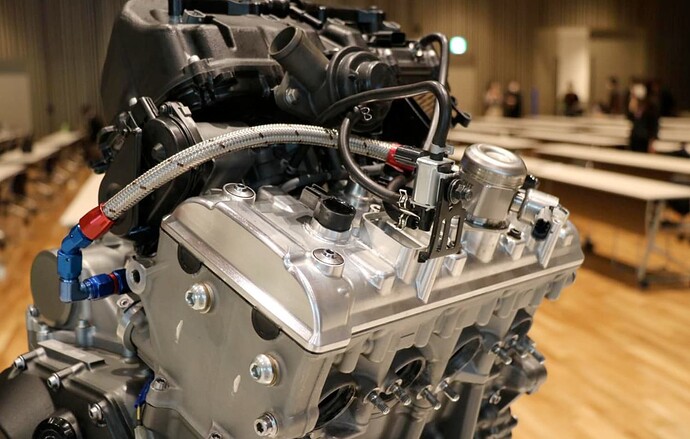 Kawasaki has a hydrogen-powered engine in the works. It could revolutionize future motorcycles for the company

Well done them for looking at better (IMO) alternatives to batteries!

Mix it with air, ignite it, and use the force of the explosion to push down on piston, etc…

That’s what this engine is doing I assume. Don’t know if there’s a spark plug or it just relies on compression like diesel engines.

React it in a more controlled way with oxygen (from the air) inside a ‘fuel cell’ to create an electric current from the chemical reaction. Then use the electricity to drive a motor.

Both routes combine hydrogen (H) and oxygen (O) to produce water (H2O). Though the combustion way will also involve some of the nitrogen from the atmosphere to produce some not very nice nitrous oxides like normal petrol engines do.

The big problem with hydrogen is storage, as it’s a gas at normal temperatures. So you either need to compress it massively to turn it into a liquid, or infuse it into some cleverly crafted substance. Either of which I believe require a much higher volume to store than by petrol.

Anyone remember the crosscage a few years back, a sort of x shaped chassis wrapped around a hydrogen fuel cell, in the end it was binned as a concept due to the increased risk of explosions in crash situations compared to petrol based vehicles, for my money, I’d take hydrogen over electric.

Were they trying to store liquid hydrogen under pressure?

As far as i remember, yes, i think it was suzuki ??

I believe the technology is moving to solid storage devices now.

That’s right, compressed weetabix I heard.(hydro-carbons or something)