Seems to me, in this age of facial recognition and cctv, that we should do better in locating the criminal types… this person, (wanted in relation to the murder of an elderly man in an electric mobility scooter ffs) leaves his mask down to show his face. And we still have to rely on community recognition and willingness to dob him in.
Seems we’re not in the era of big brother yet. 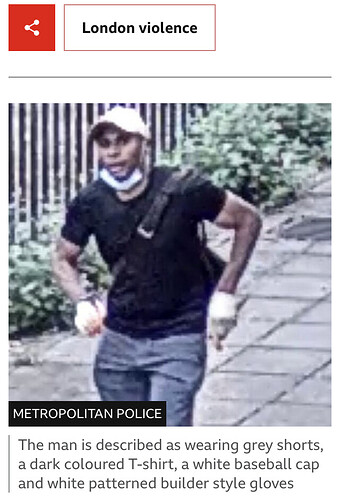 I notice a missing piece of info from the description… his height… you’d think this would be important to approximate. 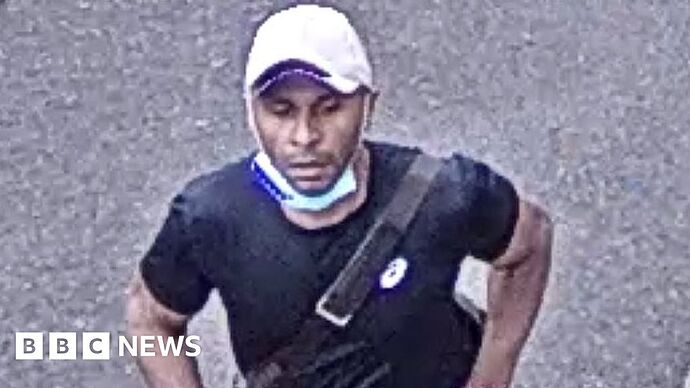 Police say the attack on Thomas O'Halloran, 87, in west London was an act of unprovoked violence.

It is good that they have the footage which means it is likely that they will catch the b@stard. I hope they throw the book at him and he goes away for his whole life.

Jumping to conclusions here, but I bet it’s not his first offence. I am sure he has met the local constabulary before. What a winker

One for Simon Webb to get stuck into, I’ll wager. For those of you who don’t know, him, Youtube channel History Debunked. Complete racist, but uses very cogent argument and he knows his shit.

hope they throw the book at him and he goes away for his whole life.

Doubt it they ought to hang the barstard.
But no doubt he’ll come up with a sob story. This is only going to continue until someone in Government grows some balls. I won’t be holding my breath anytime soon.

They also failed to mention his skin colour in the description

oh yes, because that would be racist wouldn’t it! It doesn’t seem to matter that its a very important detail in identifying him.

But obvious from the photo I guess…

What kind of human (unprovoked… police statement) randomly stabs to death and old, disabled man in the street during the day???
What a f@@king world!

Quite likely. Random motiveless killings of strangers usually tend to be by people who are mentally disturbed. They still need to be caught and locked up, of course.

Or have the facilities and staff and infrastructure to deal with them, police spend so much of their time dealing with the problems or the aftermath of untreated mental health but nobody wants to pay more taxes to fund prevention, welcome to the future.

Ì have never been into politics, they are all bent liars, but I remember years ago when the phrase was "care in the community " saying that it would be a disaster.

I agree. When I said “locked up”, I meant somewhere where they would receive treatment if treatable.

but nobody wants to pay more taxes to fund prevention

With respect why should we pay more taxes, they don’t seem to find any problem to give billions of our pounds away under the banner Overseas aid. That’s money that could help our own people for once. But thinking about it, as I’m white, I guess that comment makes me a racist

Possibility so that your grandad doesn’t get stabbed, or when you call the cops after your bikes nicked they actually turn up and a myriad of other reasons?

I’d be more concerned about pointless vanity projects like HS2 that cut a 3 hour journey by 20 minutes (wow just take an earlier train) than overseas aid.

I think this story needled me because that poor victim is like my dad… late 80s, needs a scooter, well known and liked in his neighbourhood etc… or a few of my mates dads too.
I hope this murderer is found and dies of terror whilst being brought down by a police dog after a good long chase…

Are we still sending money to India? They have their own space program FFS. Touchy subject for me too as I lost a brother at the age of 27. We couldn’t find any help for him yet we can send all this money to foreign countries.

I find crimes targeting the most vulnerable really upsetting. Not even as shocking and horrific as this one - distraction thefts or burglaries for instance. It can take the last shreds of confidence that someone hanging onto their independence has and leads to them losing exactly that independence. Sometimes even “just” having £20 taken can erode someone’s confidence so much that their lives are ruined.

I find it particularly worrying that if they do catch him and he does get put away the do good brigade will want him to get treatment so he can be released back in to society to offend again.