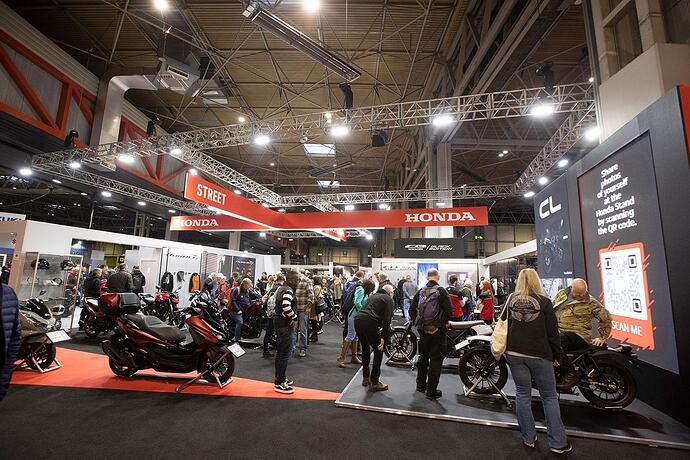 Thousands attended this year's Motorcycle Live Show at the NEC. Tell MCN your favourite memory of the event.

Maybe as I have been annually for years I did not find this years show that exciting. Don’t get me wrong lot of good displays, but didn’t feel there was an exciting atmosphere.

It’s funny, I had quite a different experience. It helps when you’re with one highly excited person and another who has a bike but hasn’t been to the show before. I thought there was quite a genial atmosphere overall. Perhaps the relatively low Tuesday attendence didn’t give it the buzz you were expecting? I had a particularly interesting and long conversation with a chap from CCM.

It’s the first show for a few years unaffected by Covid and it felt, to me, like people were happy to be back to normal. If it had felt like last year again I probably wouldn’t be going in 2023 but now I’m looking forward to it.

Maybe as I have been annually for years I did not find this years show that exciting. Don’t get me wrong lot of good displays, but didn’t feel there was an exciting atmosphere

I thought the first one I went to after a long period away from biking interesting and the subsequent ones when I was thinking about getting another bike were useful. Where we met up with others from TTF the show itself to me became secondary and I decided to give it a miss this year. They’ve put the price up too when (I’m told) things like the motorhome and tin tent show are far cheaper to get into so makes me think they’re taking the piss by putting the price up again.

I enjoyed it. Too many similar styled bikes, like the CCM , Herald, DOT, etc. Ok if that is the style of bike that what you want but as business models they can’t all survive I suspect.
Off setting the cost of the tickets, travel etc I managed to get a new helmet £45 cheaper than anywhere I had seen it and I could also try on all of the lids that I’d short listed in one place.
Overall I enjoyed it . It’s the traditional end of season shindig…!

“Bikes all look the same these days. Not like when I were young” etc.

I thoroughly enjoyed it but it was all a new experience for me. Plenty of bikes there that were absolutely not my thing but plenty that were too! Got the train up with a few others and scored a ticket for free so a good day out for not much money for me.