New warning as thefts climb: Crime figures are on track for shocking 23% increase on 2021 (MCN) 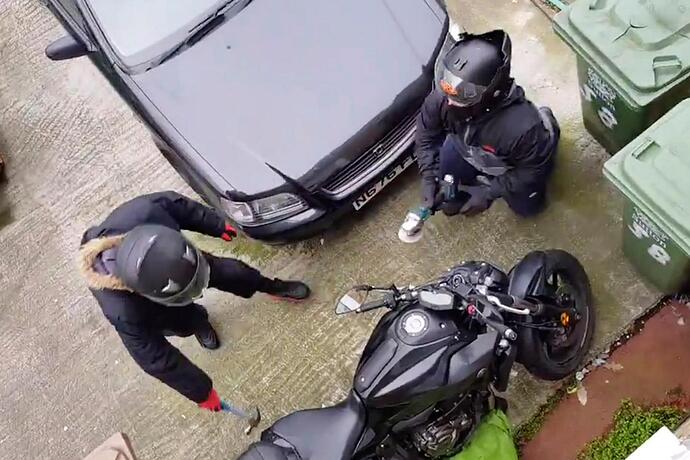 New warning as thefts climb: Crime figures are on track for shocking 23%...

The ability to remotely immobilise the engine is interesting. The sad fact about the trackers though is that the “better” thieves rather than opportunistic scrotes can locate and remove a tracker in a very short time indeed so I would think the recovery figures for bikes with trackers depends what class of thief nicks your pride and joy I would think.

And your local plod.

It is a shame that the toe rags think that they can steal bikes, and this will continue until the police and the courts make the punishment fit the crime.

They also need funding. I posted something the other day about an article written by an ex copper in the MAG magazine. It makes for depressing reading.

John Mcguinness had the right idea when he suggested that bike thieves should have their fingers cut off with their own disc cutters.

Why do sentences run concurrently? If the thieves commit one crime they may as well commit multiple crimes, they’re not going to be any worse off!!

Get them to rat all their mates out and spill the beans on everything/eveyone they know who’s involved. If they get convicted of the same offence, escalate the sentence each time so they know it will get worse and worse for them if they continue. But also, get some effective rehabilitation programmes in place so they have other options than to go back to the life of crime.

How come there’s fewer police these days? There were loads of em when I was a kid, walking about “ello, ello, ello, what’s all this then?” and tearing around after the great train robbers and the like. The dustmen came every week and carried the metal dustbins to the wagon, a milkman delivered the milk, the coalmen came and unloaded hundred weight bags into the coal bunker in the back garden. Councils had enough houses for us all to live in and the hospitals had beds just waiting for me when I fell off me bike.
Why is there no funding? There was enough funding back then. There’s more people paying more taxes now.
Just sayin…

Money money money to answer all the above questions.

The people earning the big money pay bugger all taxes, they pay retainers to accountants to ensure that status quo.

I sure there most be a much higher percentage of spongers than what there used to be.

Depends on whether you believe what they write in the Daily Mail.

@Iron it is progress mate or not.

I need to tell about my recent issue… I never lock my bike but have a cheap snake lock in a saddle bag.
I recently discovered that someone stole the snake lock (closed, without key, totally useless). Anyway I don’t complain, now the bike is lighter , and I still don’t lock it…

Must be a French thing…

Why is there no funding? There was enough funding back then.

Well the government needs to save money, so they can give it away to other countries.