Sunday before last I was idling away the afternoon watching YouTube videos, as you do, and one of these was of a short motorcycle trip to Wales a few weeks prior. This reminded me that I’d planned to do similar this year as I’d not been Wales since getting back into motorcycling. So, in a sudden burst of enthusiasm, I checked what the weather was doing for the next three days then one hour later had a B&B booked.

The following morning I was heading west, with blue skies above and a happy excited feeling inside. The first couple of hours were a bit of a slog with the traffic and urban areas, and the clouds came in thicker, but that was OK, I was heading on an adventure.

The first bit of proper Welsh mountains was the B4391 west of Llangynog. When you’re going along the views down are fantastic as the mountain is quite steep but there’s no place to stop for photo until near the top. 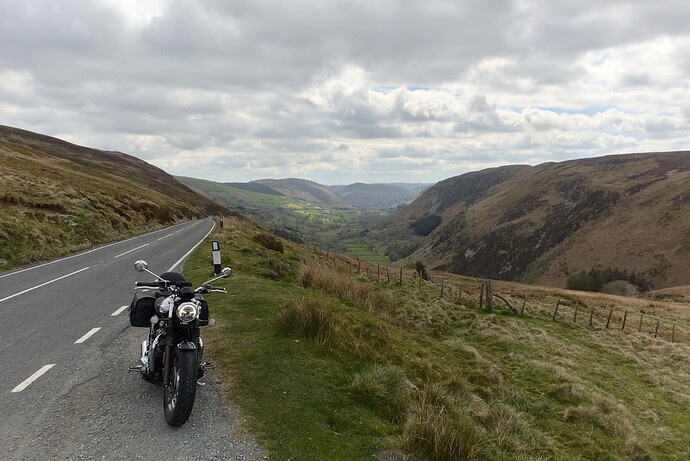 After going down to Bala for fuel and lunch it was northward up into the hills again. I wasn’t paying attention to the satnav so missed a turning and headed into Ffestiniog, but got a couple of pictures out of the detour. 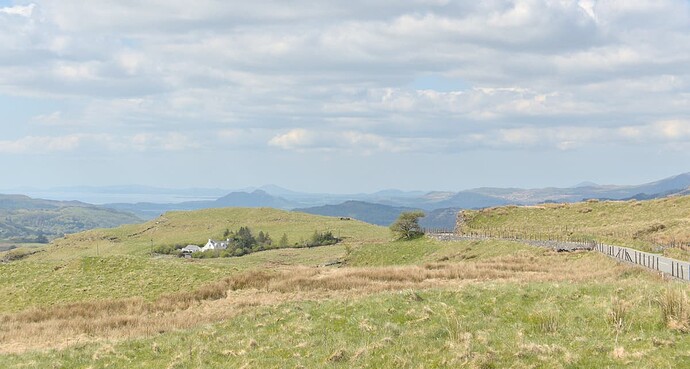 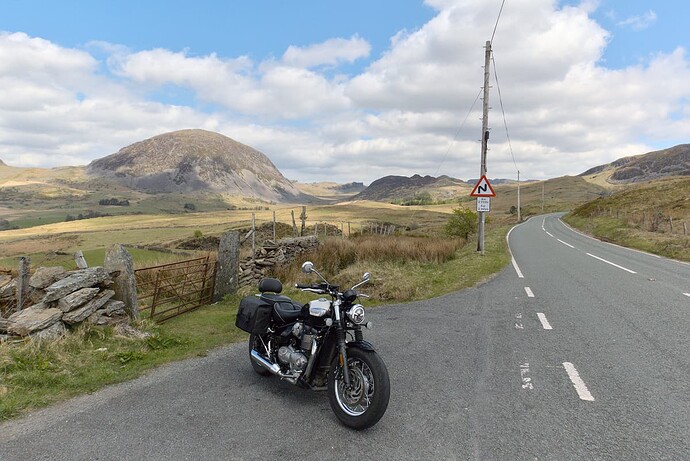 Back on route again it was north to Betws-Y-Coed and around to the Snowdon area. The sun was properly out and I was just soaking up the scenery. 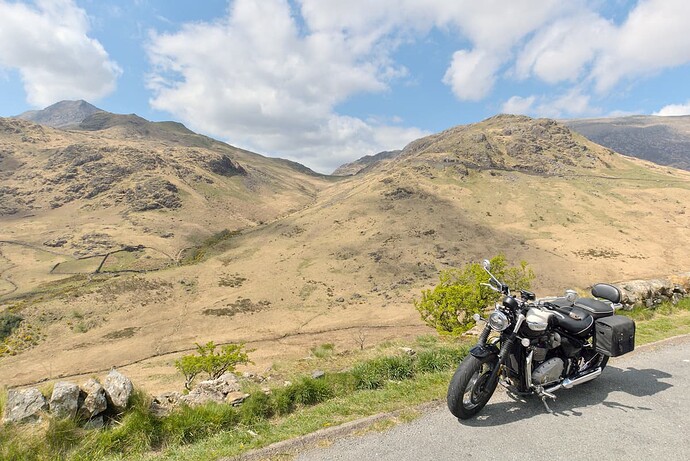 By the time I got to the major A roads my body was really feeling the hours of riding and my mind started to drift to thoughts of just trying to get the day over with. But as my route headed across the small roads on the hills to Llanidloes I got my second wind and stopped to enjoy the views a few times. 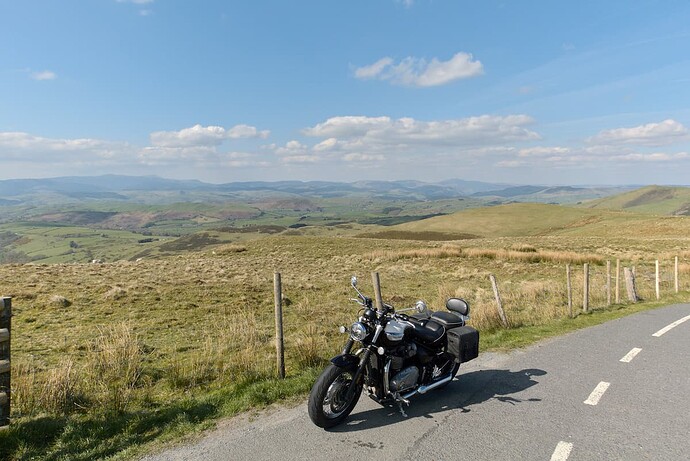 I got to the B&B just after 5pm. This was at some tea rooms next to the reservoir in the Elan Valley and check-in had to be before it shut and the staff went home. My body wanted me to stop moving, but after eating a pastie I’d brought with me I couldn’t let the fine evening go without exploring a little.

Just around the corner was one of the dams. 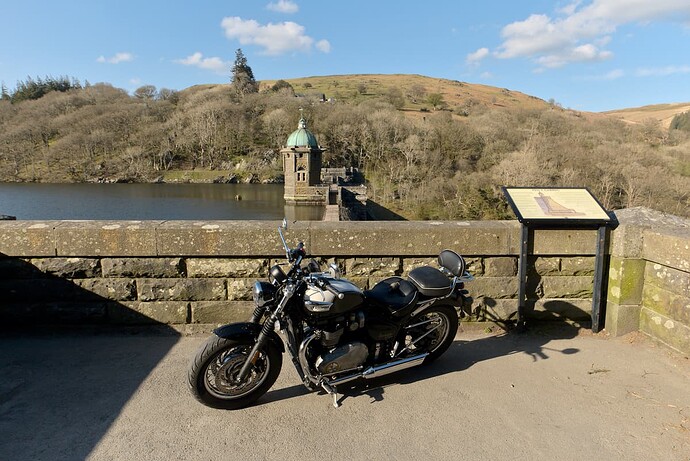 And further up river was open land and a bench to sit on for a while and enjoy the evenning light. 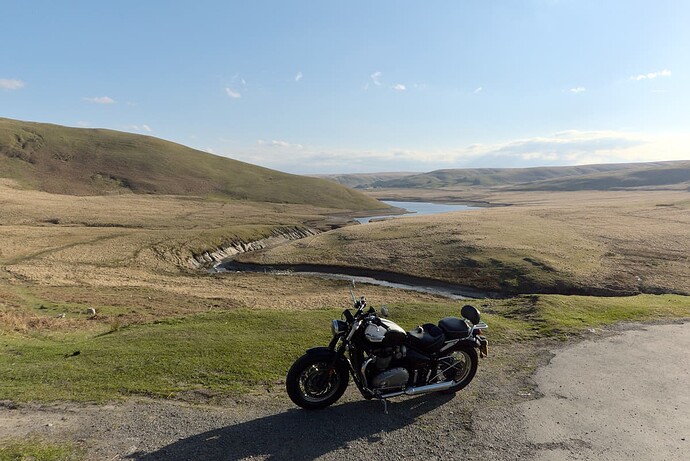 There was no mobile signal anywhere in the valley, but once back at the B&B I could check-in with Mrs Mouse via messaging app using their painfully slow WiFi. Then I enjoyed the beer I’d brought with me from home and had the feeling of having the whole valley to myself. (There was only one other Couple staying that night but I didn’t see them). 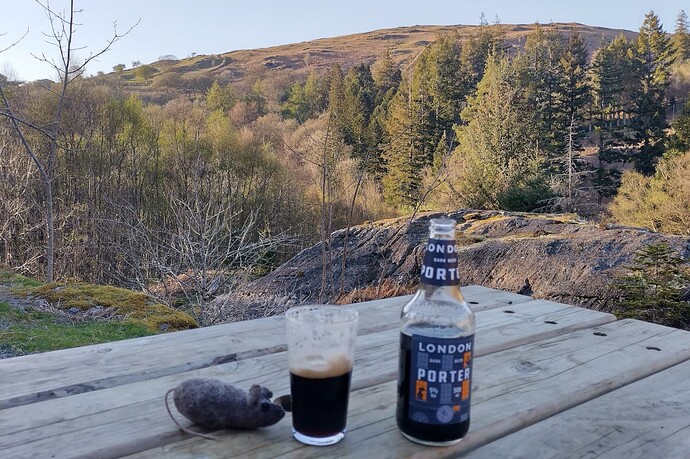 The next day started with breakfast and some pre-emptive ibuprofen. The skies looked grey and I wondered if I’d already had the best of the weather. 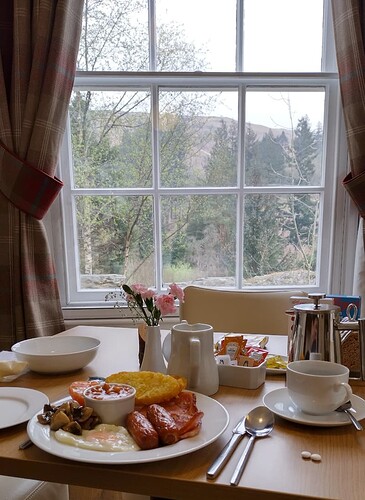 On setting off for the day’s ride I decided that grey weather was fine by me, it just added a change of atmosphere. So I pootled along the mountain road to Cwmystwyth at 30mph or less and just soaked up the scenery. 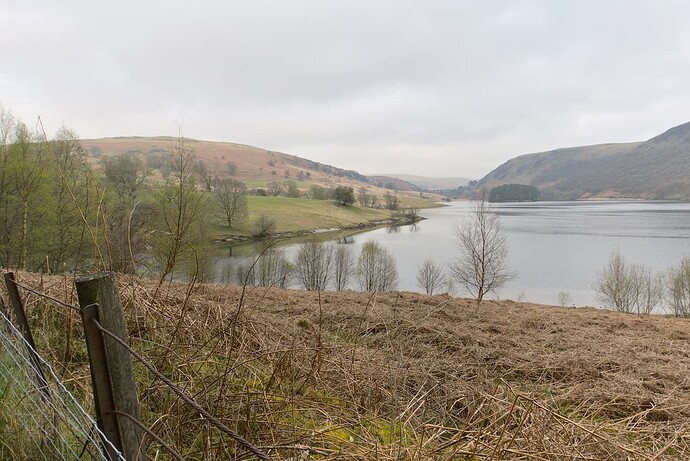 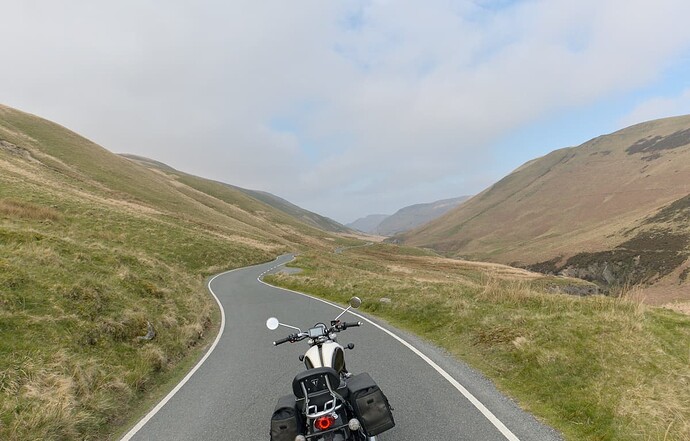 As a bonus the skies were getting blue. 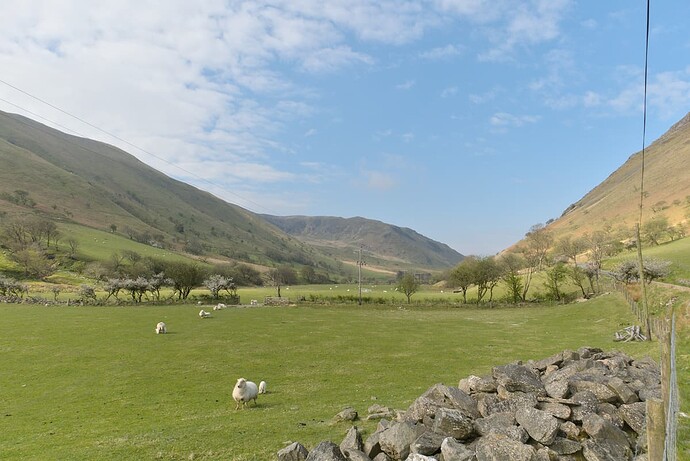 When I got to the wider B road where I could easily pick up the speed I still didn’t go above 40mph. The roads were empty and I could just relax and make the ride last. When I got to Tregaron it was time to turn off onto the single-track mountain roads again. This is where I hit my first bit of ‘traffic’ for the day, a lone cyclist struggling up the valley who I kept overtaking as he’d pass me whenever I stopped for photos. 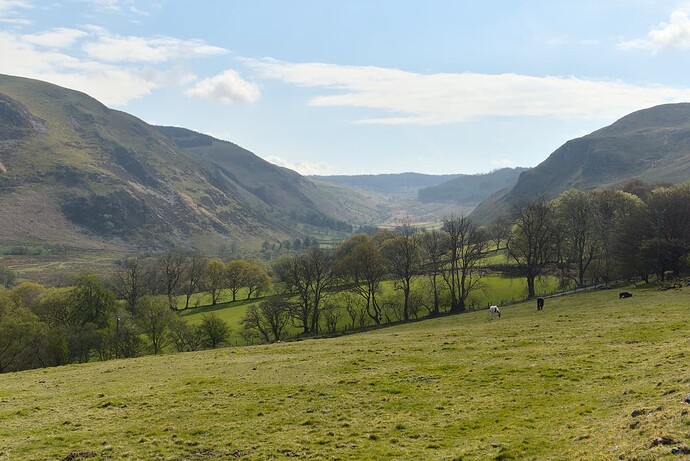 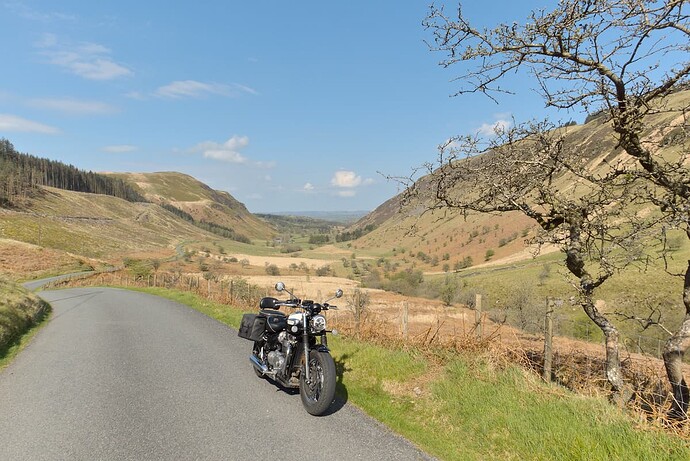 Once on top of the mountains I was on open moorland and eventually came to a ‘road closed’ sign. Whilst consulting my satnav I saw a dozen ADV riders coming the other way from the direction the diversion sign was pointing, but I decided to stick to my route anyway and ignore the sign. I soon found out why the road was closed, for a few hundred meters it had completely broken up and fallen away, and at one short point there was only a foot wide bit of good tarmac left, good job I was on two wheels.

After passing some conifer plantations the road started to wind down the mountains again towards Abergwesyn. 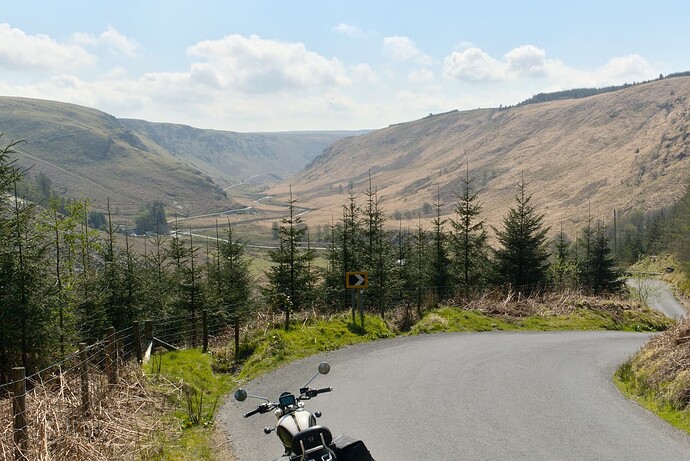 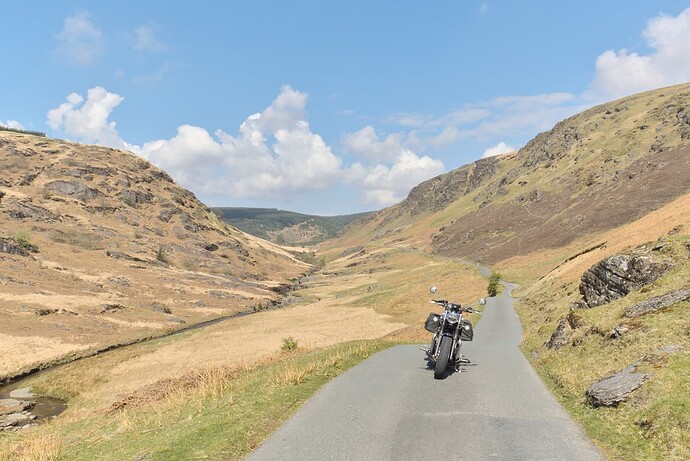 By the time I was approaching the main A road at Llanwrtyd Wells I realised that I’d done two hours riding with great weather and scenery and the only traffic I had encountered going my way was one cyclist and one car, motorcycling heaven! After a fuel stop I was heading south with roads still very quiet and hoping to find somewhere for lunch.

When I came Llandovery and saw a cafe on the main road with parking and seating out front I thought my prefect day was continuing. Unfortunately, the fish and chips I ordered was so horrible I put it in the bin, so it was somewhat grumpily I continued on my way to the Brecon Beacons, with grey clouds in the sky ahead.

The ride to the Black Mountain pass was good but it was starting to cool down under the clouds, so I stopped to put on another layer and look back to the blue skies I’d left behind. 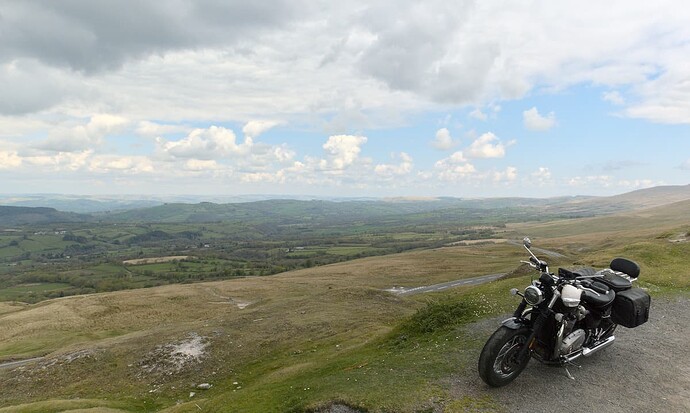 The road up and across the top has 40mph speed restrictions, not that I’d personally want to go much faster in most places as it’s very twisty, but I always find seeing the regular signs and irritating reminder of the nanny state, and they spoil the free and relaxed feeling I get when on the open road.

Once down the south side of the hills I entered a built-up area, and for the next half hour was riding through multiple villages which all merged into each other, with their attendant 20 and 30mph speed restrictions and speed bumps. At this point I was thinking that with all the roads across the Beacons going north/south and the south of Wales being all urban and industrial it pretty much made it not worth while ‘doing’ the Beacons.

Eventually I was on an open road going North again, and once back the other side of the Beacons it became sunny again and it was with a sense of relief that I headed east on the A40 to Brecon in search of food to make up for the missed lunch. This turned out to be more difficult than I though as Brecon is rather big and sprawling, with a one-way system, so I ended up back at a farm shop and deli I’d passed on the way in. I got a nice filled roll there, and more importantly, beer supplies for the evening.

The route back to B&B was mostly B roads by fields and open land with grazing sheep. Along the B4519 there’s signs at the side of the road saying it’s a military firing range and I passed a group in camouflage uniforms. 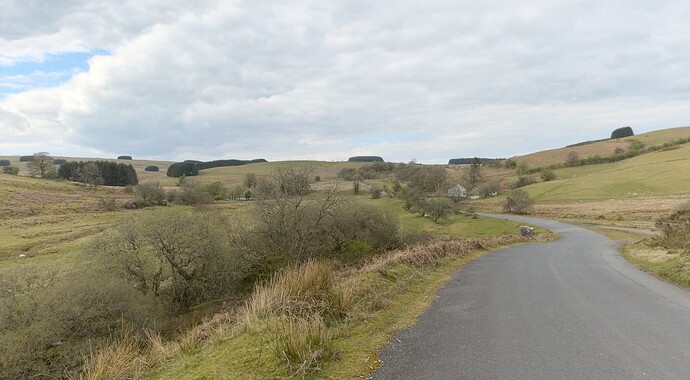 I needed food for the evening so though I’d see what the local village had to offer but it was very small and didn’t have much. I was looking for some kind of takeaway as I didn’t fancy eating in due to covid, so I ended up back-tracking down a stretch of road to a services with a Greggs that was just closing. Armed with a roll and pastie thing from there I headed back to the bench in ‘my’ valley to eat them. 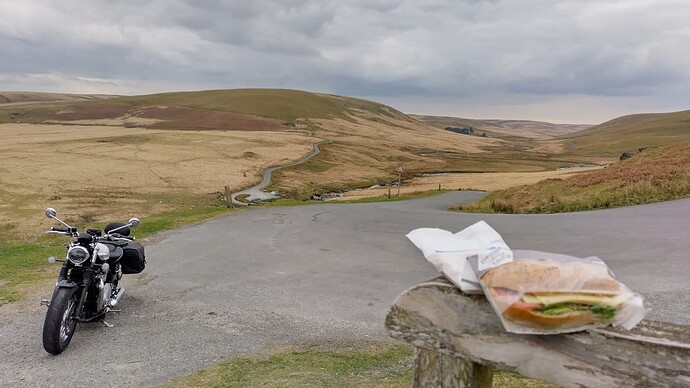 Once at the B&B it was time to drink the beer I’d bought. Just wished they’d make the necks of these bottles a bit bigger… 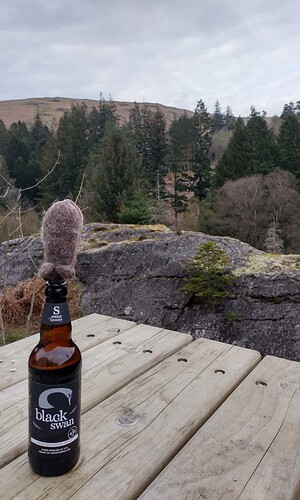 For the ride home on the final day I thought I’d start by heading the ‘wrong’ way and go back west down the valley I started on yesterday. This time it was sunny from the start. 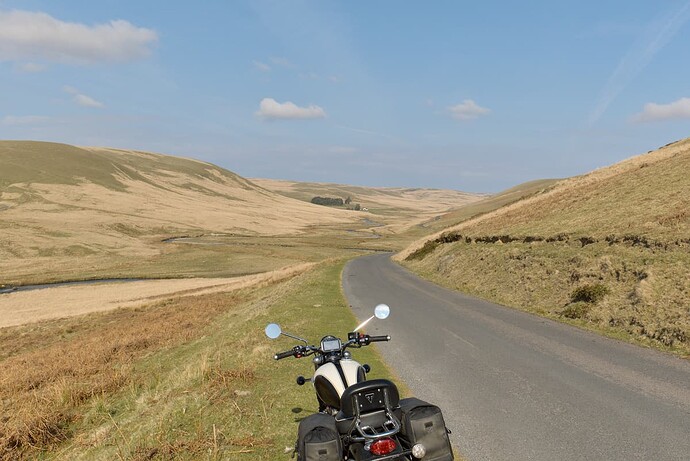 Then at the end I headed north to go via Devils Bridge to loop back to Llanidloes. With my satnav on it’s ‘windy’ setting it told me to leave the main A44, which was nice as I was just following traffic on that, however the single-track road it sent me on over the hills and by farms was a bit more intense to ride than I wanted. The gravel down the centre of the road was OK on the straight bits but it wasn’t nice on the corners of hairpin turns on the steep bits. 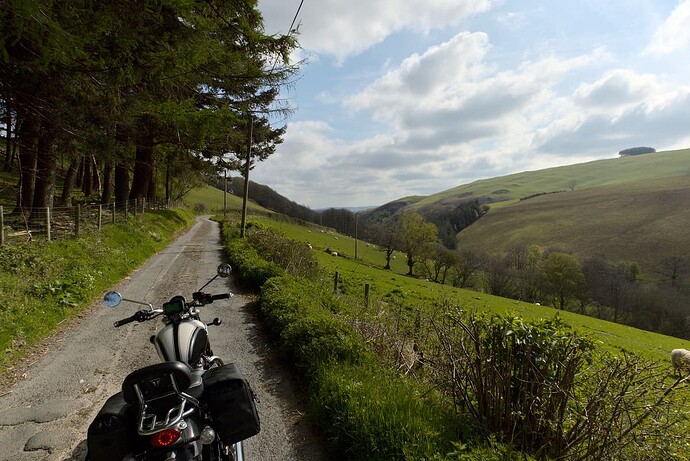 After fuelling up and grabbing some food for a picnic, I set satnav to take me to the moors where I’d been on my first day. This ended up taking me down some more challenging roads, but mostly it was nice open countryside or forest roads. 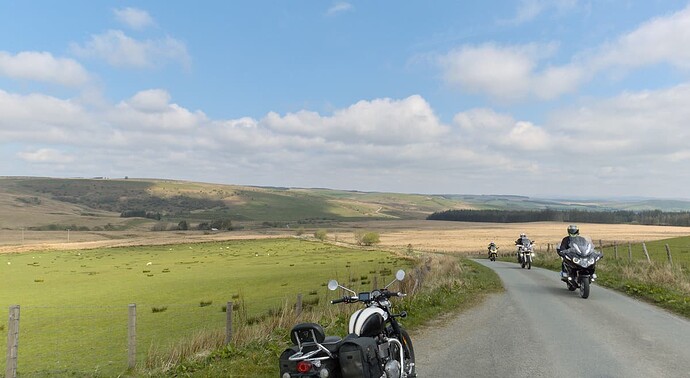 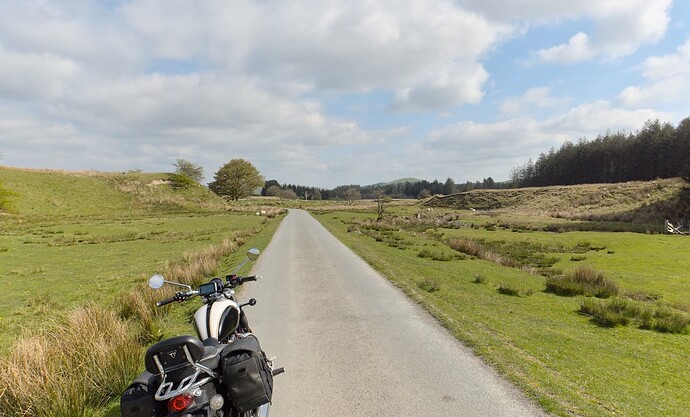 I had had half a mind to do some exploring on this final leg but considering I would still have nearly 3 hours riding to get home afterwards I decided to just head to the spot I’d earmarked to eat my grub. 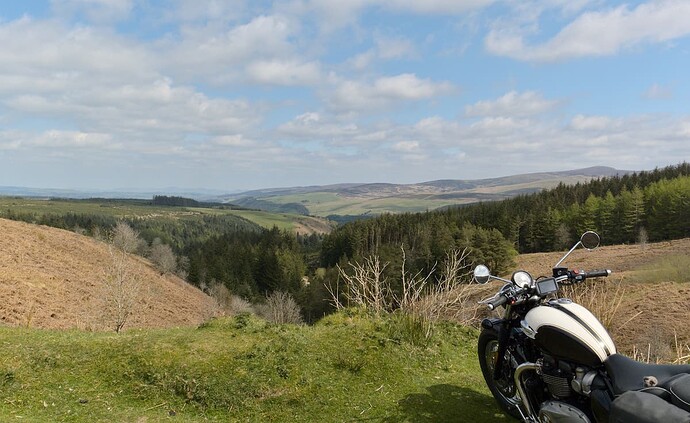 Then it was off back east and home in time for some sorely missed home cooking from Mrs Mouse.

4 posts were split to a new topic: Importing posts