A grand day out at Steel City Classics

The working week was over. Saturday rolled around and the sun shone brightly, neccesitating biking jeans only (well, not only…). Taking the bikes out was the only sensible thing to do with the day. All we required was a direction, which was supplied by Steel City Classics,who were having an open day to celebrate taking on Indian as a brand.

Familiar as we are with many of the local motorcycle purveyors, we headed out with confidence to SMC in Sheffield, where we knew Steel City Classics were located. And so we arrived to a general lack of festivities and a distinct lack of Indians. 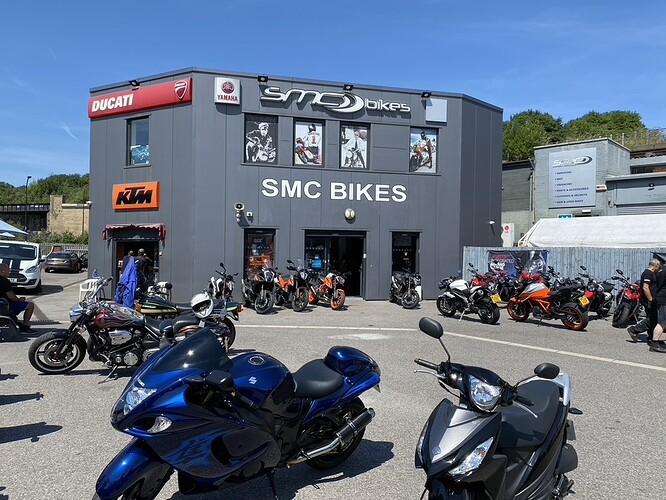 Even more suspiciously, the door to the the upper floor where we’d perused the Classics on a previous visit was noticably shut. No bunting, no buzz, no bikes. Perhaps we had the wrong day? No. We had the wrong place. Steel City Classics has relocated to Chesterfield. There was nothing for it but to jump back on the bikes and ride south for another 15 miles in the warm, still air. How awful.

I don’t know Chesterfield but fortunately the satnav does. Half an hour later, we parked up in a somewhat more vibrant atmosphere. The likes of Asia and Kansas playing loudly and people milling about chatting and scoffing hot dogs. 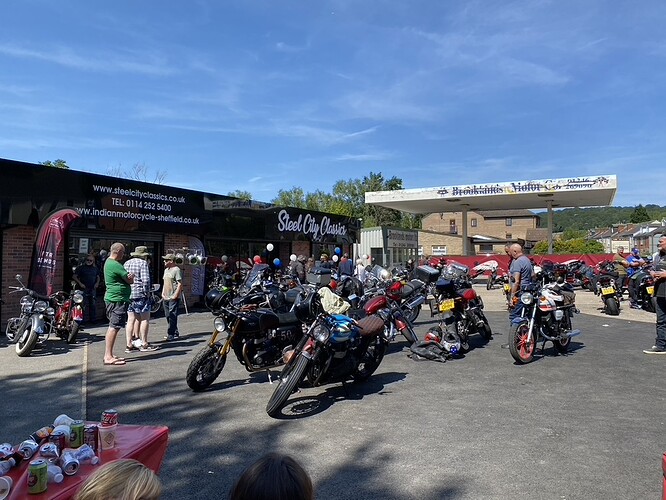 Apparently we’d missed the larger crowd. At one point they were having to direct people in and out of the car, er, bike park as it was so packed.

The Indians were the stars of the show… 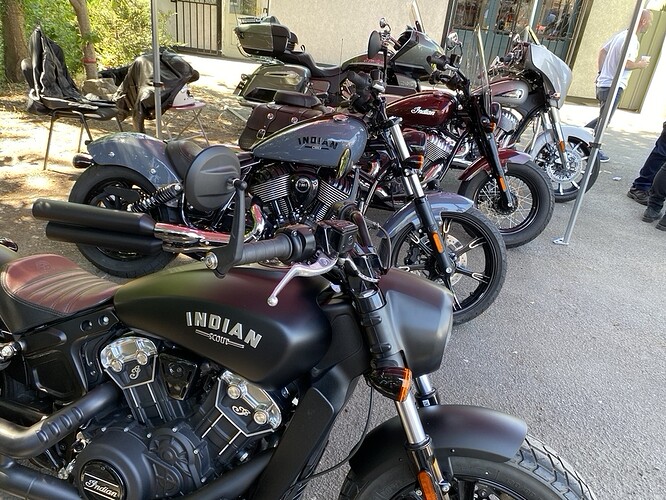 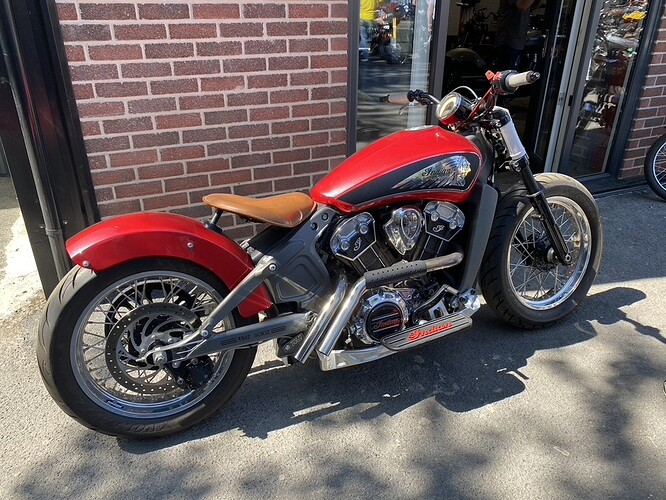 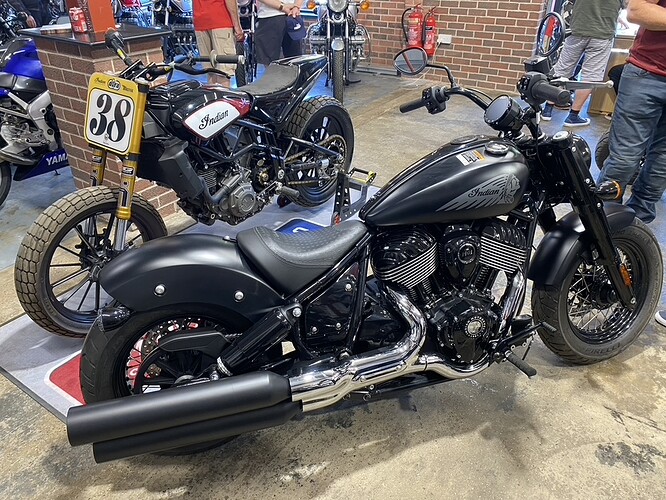 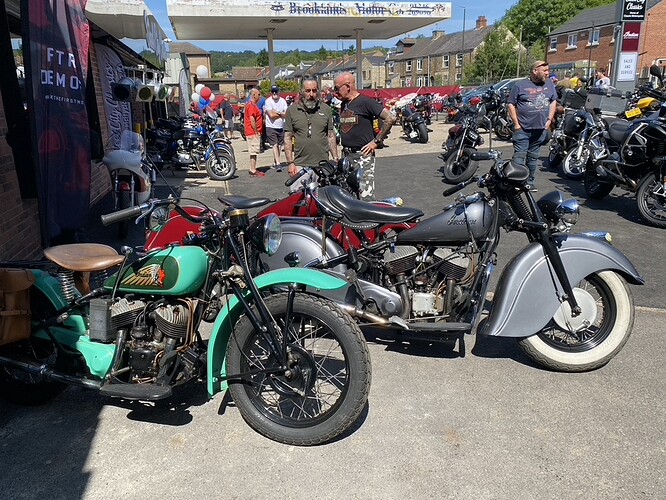 If you like your retro, inline-four Hondas, there were several to choose from. 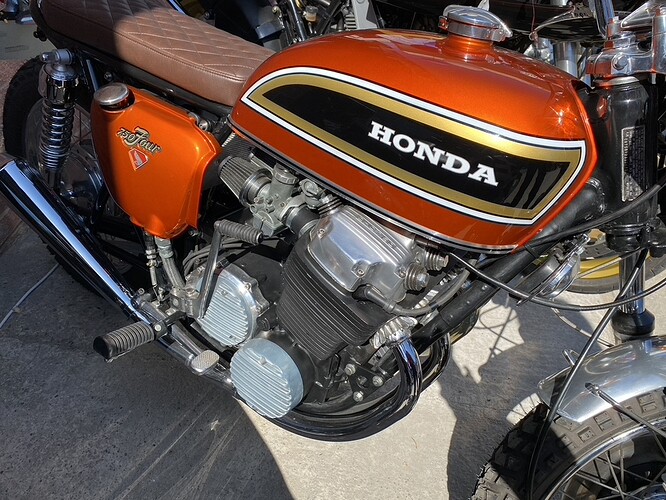 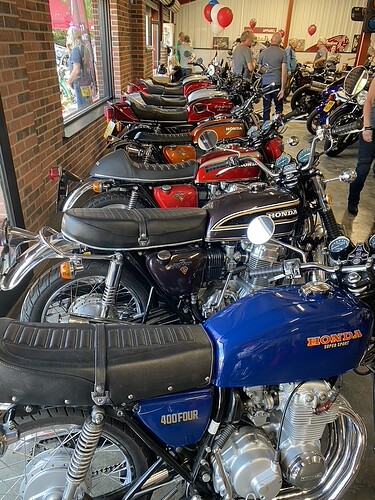 Not to mention a couple of Triumphs. 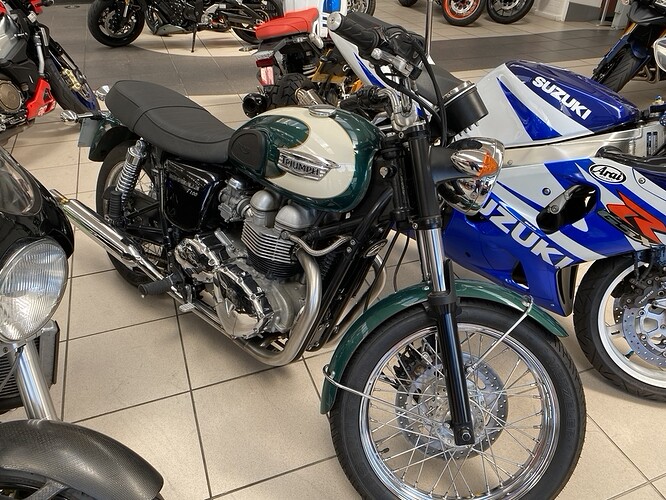 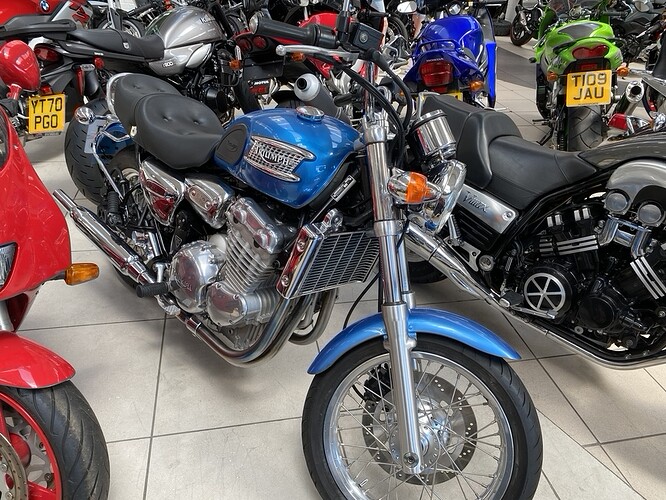 There was even a Buell, for people who only like the middle bit of a Harley. 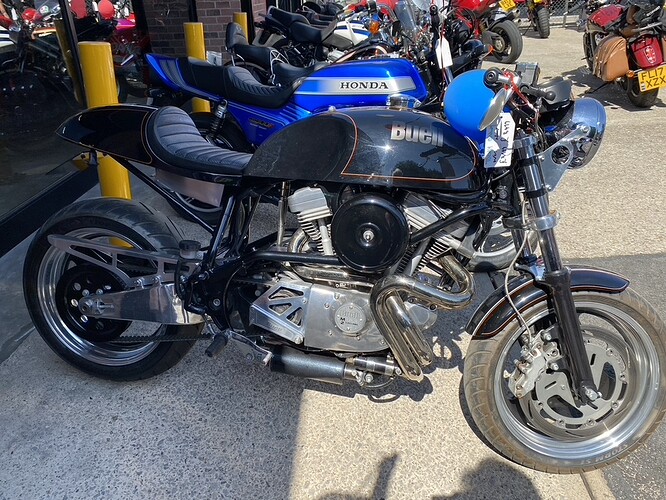 It’s not a big place but definitely an interesting one to look around. The staff seem very friendly, too. 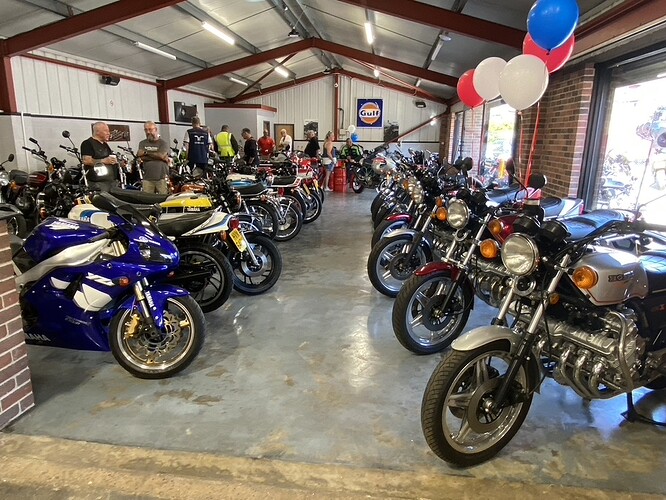 Test rides were available but only for 15 minutes. I want to try an FTR but you can’t figure much out in such a short time. Chatting to the sales chap, he agreed and said to come back another day when I can take their demonstrator out for a proper run around the Derbyshire countryside.

From Chesterfield it’s a fairly short run over to Matlock Bath, so we did. Not too many bikes there, surprisingly. I suspect it was a different story on Sunday. 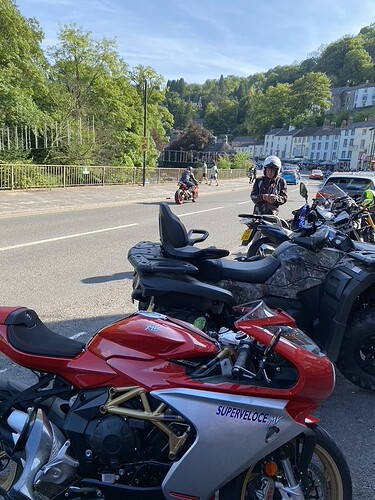 One cool (non-alcoholic) beer later we took our familiar route home, up the A6 and through Buxton and Glossop, where there are some good places to stretch your legs, as it were. A grand day out indeed.

I do like the scouts (not in a jimmy saville way)

Yes, me too. I want to try one of those as well.

Indian have really improved in the looks department in the last few years. Some of their less ‘dressy’ v twins are looking really good.
Did they employ some new blood?

I don’t know much about them but they’ve certainly done something, or got some substantial backing, to take on Harley at their own game.

Looks like a nice place to mooch about! Someone at my place of work rides in on an FTR in the nice weather, I really like it in the flesh, whereas I am not that taken by it in pictures.

They have a couple of nice ‘carbon’ editions at SCC. The ones with the white tank sides. I’m not keen on the other styles. Just sitting on the bike I wonder how agile it is compared to some similar machines. THere’s only one way to find out. I wish I could take it out today - it’s glorious outside.

I had a look on their website. They’ve got some nice classics for sale but well pricey.
Tempting as it is to buy a dealer’s rebuild or resale, I think I’d rather go to somewhere where you know what you are getting - you’ll need a good toolkit and they deliver for free - tempting to have a go at a Jap one

They normally have a lot more available so keep watching what’s being imported or they’ll find something for you. I think they import from the US and Canada. Pretty easy to get a registration as that Amen Framed Chop project I got fed up with was a re-register from Niagara Falls.

They’ve featured a few of their bikes in “[classic bike” magazine, taken them for a test ride and made an evaluation of them, they came out pretty well.

Yes, I think I remember that (blimey

) a couple of Honda 550 fours wasn’t it. They’ve had some good looking projects over the last few months 750Ks Z900s H750s. I must admit to being tempted to get a Rising Sun bike on the go. No idea on spares availablity and costs though.

Yeah, there was also a Tsx 750 yamaha, bit of a rare beast, twin cylinder oddball that was only built for two years. The KZ 750 twin was an underated bike imop, but back then everyone wanted the latest greatest 4 cylinder thing. I think a Kz 750 would be a good project.