Popped down to my local coffee haunt earlier and this little beauty parked up next to me. 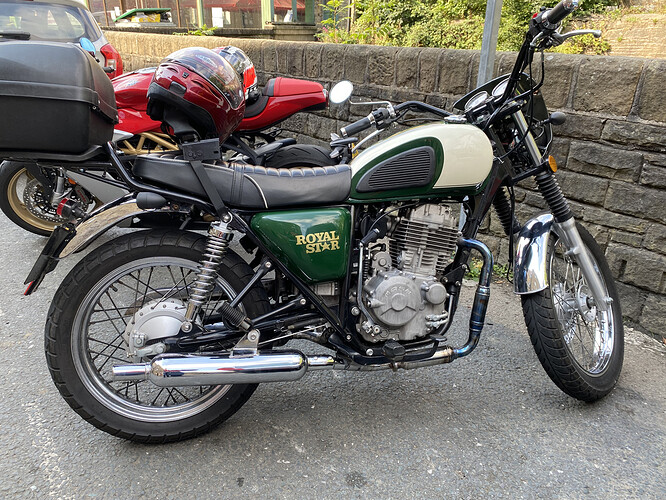 That’ll be a French Mash Potato rather than a Birmingham Small Arms.

Yes, that looks like a Franco/Chinese ‘Royal Star’. ( I had the real Brummie version in about 1974. Can’t remamber what year the bike was.) Still, with Triumphs being made in Thailand and Royal Enfields being made in India, what can one say? Quite pretty, though, apart from the catalytic converter in the downpipes.

That’ll be a French Mash Potato rather than a Birmingham Small Arms.

Or Bastard’s Stopped Again, as my mate was wont to say about his A10

Ooh wonder where they hid the catalytic converter

Ooh wonder where they hid the catalytic converter

Of course, the other well used alternative for the BSA acronym was Bits Stuck Anywhere

Bits Stuck Anywhere was a good joke, but I think it was a bit unfair. Once the world’s largest motorcycle manufacturer, BSA made some really good looking bikes: the Gold Star and the Rocket Gold Star must be two of the best looking bikes ever. Even the rather bulbous A50/A65 series were good lookers in their way, as were the last OIF models. (The Rocket Three not so much.) I’ve never been a BSA man myself, but years ago I owned an A50 and an early 50s ZB32 scrambler, and, to be fair, neither of them ever gave me any trouble. In their heyday, they were mostly good honest well-engineered bikes.

I had a B25 Starfire and an A65 Rocket and learned a bit about engines and gearboxes from them but loved them both. Yes they were outdated and the engineering could have been better but with modern technology in bearings, gaskets and closer tolerances on parts they can now be usable even after 50 years plus. The Mash above is what it says, a mash, the new BSA Gold Star will never be a true Goldie, as the Mini car is not a true mini but still a nice enough car.