The Yondermann ride got extended a bit on Sunday. Three of us went out, one guy I know but haven’t ridden with before, and @Motopulcino on a Supersport 950 borrowed from Ducati Manchester. The Street Triple is still leaking fork oil so it was the MV that got rolled out of the garage for me.

It’s nice to be out in September without any concession to cold or rainy weather. I know the reservoirs are extremely low but I’ll trade a longer hosepipe ban for a few more nice weekends before autumn sweeps away another summer.

Predictably there were a lot of bikes out. Some travelling in twos and threes, like us, and occasionally much larger groups. A dozen Harleys rumbled by at one point and a veritable flotilla bikes passed us going the other way as we negotiated the small country roads.

First stop was the Yondermann cafe. Popular with us, and a lot of other riders enjoying a Sunday fry-up. 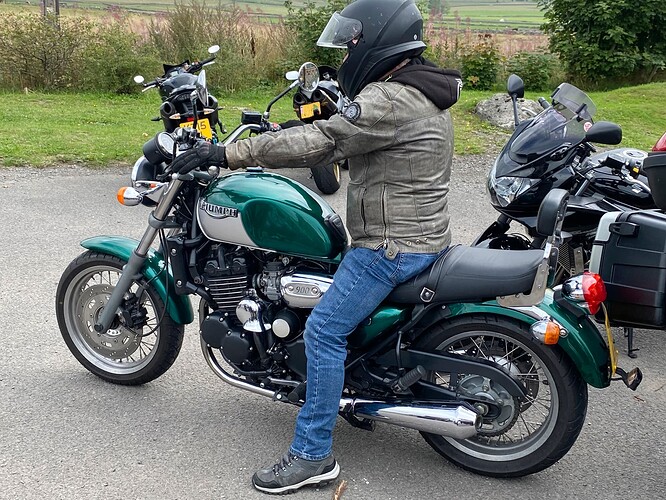 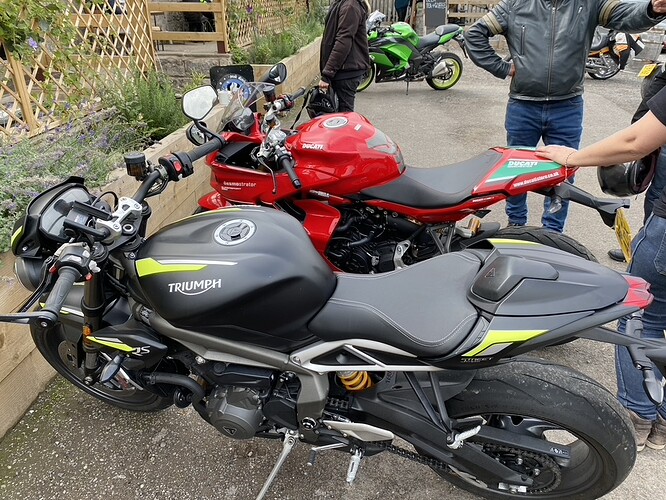 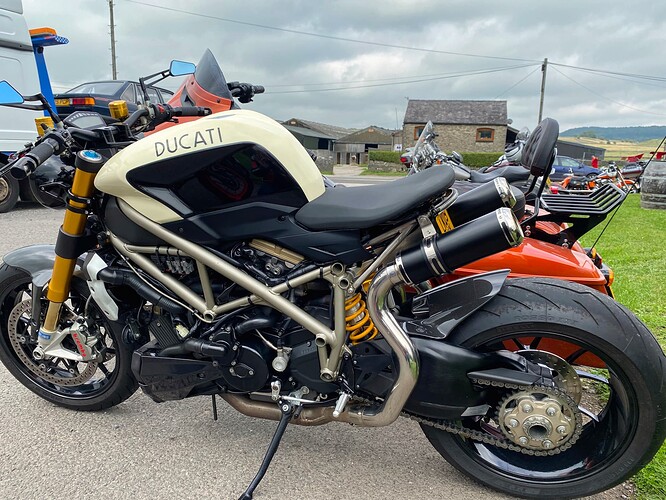 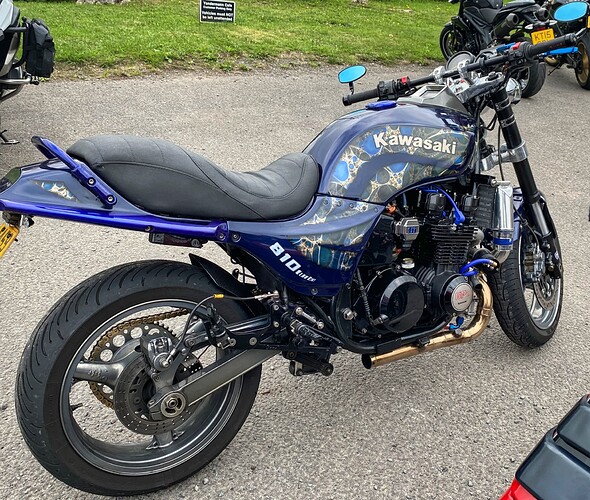 Rain threatened during the afternoon but never arrived, despite some ominous clouds lurking in the middle distance. Breakfast outside and some ogling of machinery went on for about an hour. We weren’t in any rush to get back so we pushed on to Monyash, about 17 miles further south. I didn’t even know there was a biker haunt there.
The firm suspension on the MV comes in to its own when things get a bit more spirited, unless the road surfaces are particularly crap. It really isn’t a bike for pootling about and the Derbyshire B-roads are obligingly twisty.

The tiny village of Monyash has an inviting cafe and pub with an access road perfect for lining up the bikes. Opposite is a small green so if the seating is taken up there’s still pleanty of space to lounge about. 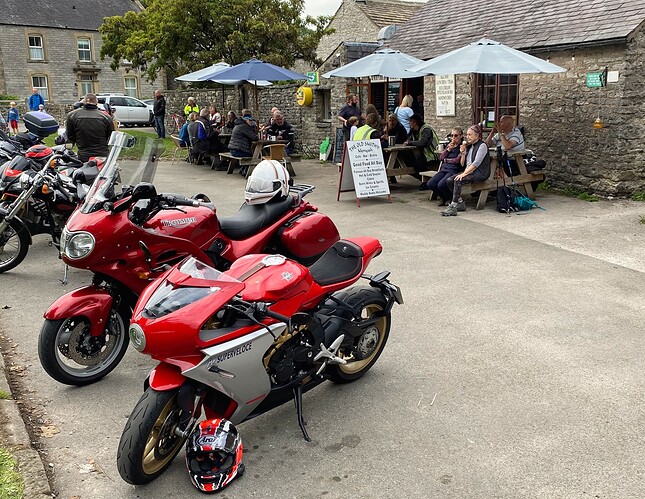 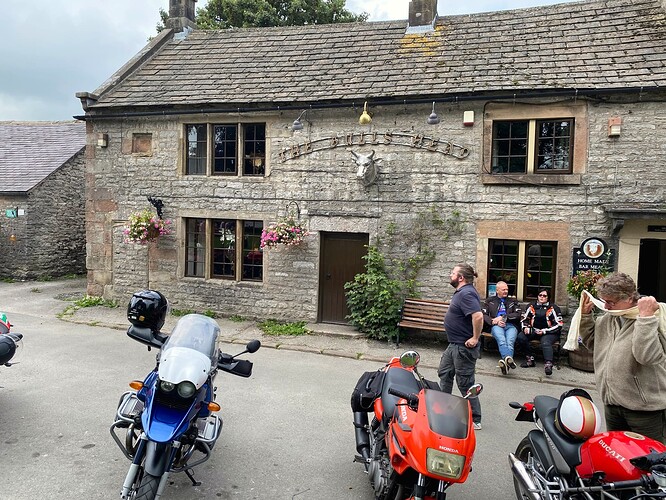 There were a few interesting machines on show. The quiet village ambience seems to draw in the older bikes, as well. There’s a ncie feel to the whole place. 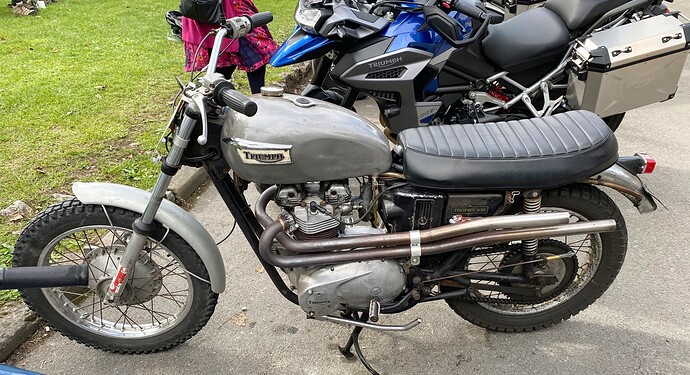 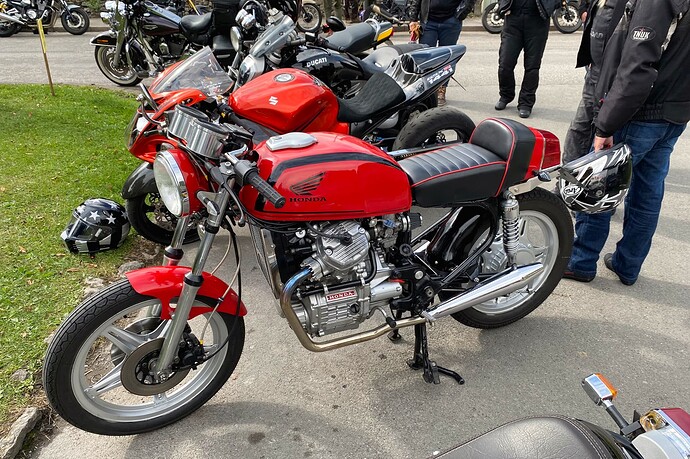 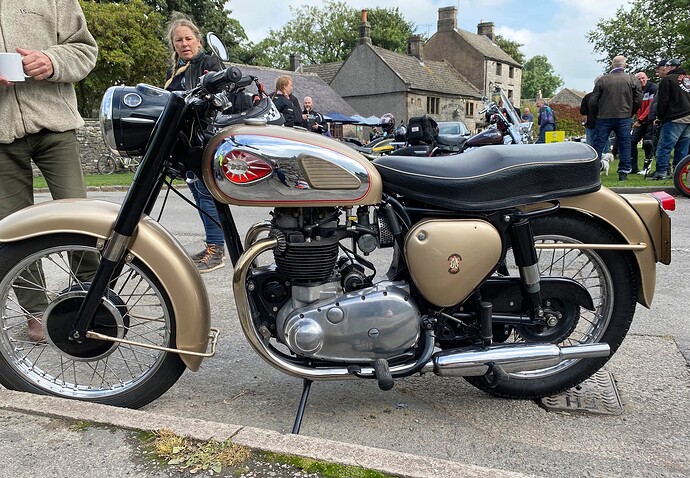 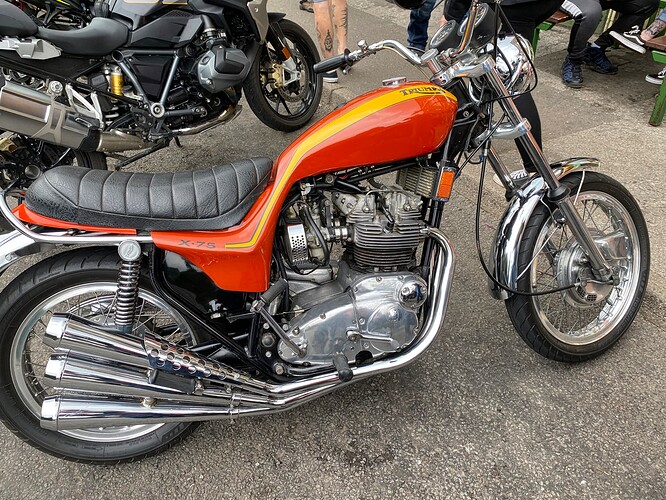 Finally on our loop around the countryside, Matlock bath. Which was predictably busy. One of those days where you might have to cruise up and down twice to find a space to put the bikes. Less esoterica on show than Monyash but this one stood out. Possibly not to everyone’s taste but it’s certainly a nice job, whoever did it. 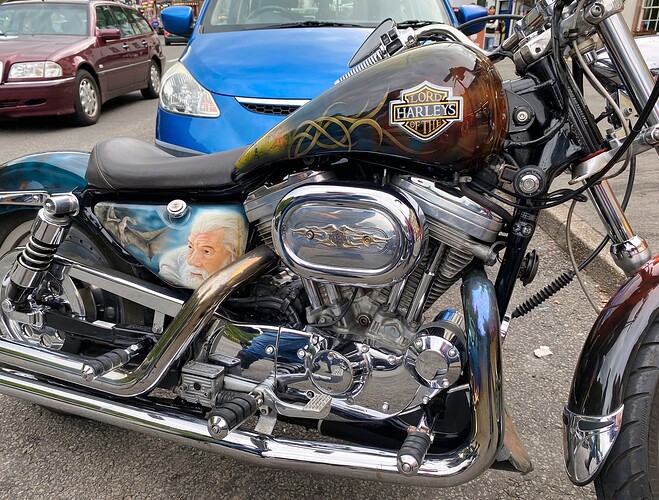 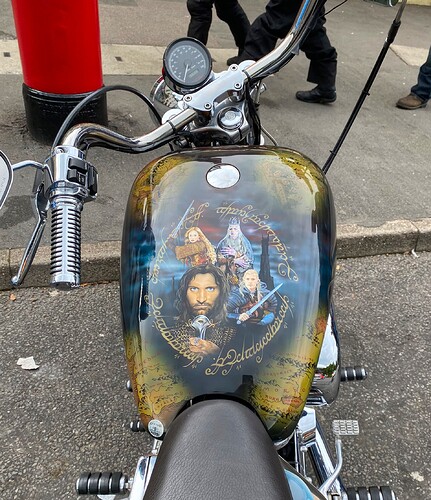 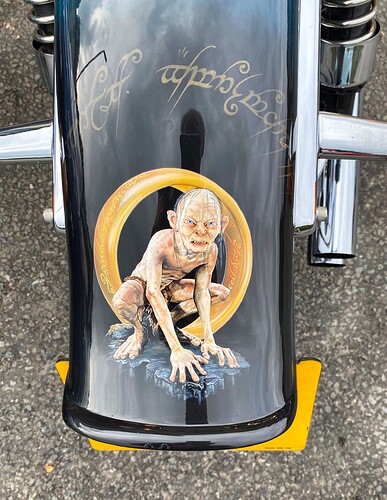 A small portion of disappointing chips and we set off for the A6 towards Buxton for some more fast, sweeping bends, up through Glossop and then home. If there’s a better way to spend a fine Sunday afternoon, I don’t know what it is.

Sounds like your classic ride out… great fun and some nice bikes, except for the disappointing chips, what else would you wanna do on a dry September day?

Yes Yondermans is a cracking breakfast. And what is not to like in the Derbyshire Dales. Glad you had a good day Saul.

Sounds like a brilliant day out (bar the disappointing chips!) - thanks for the photos too, I enjoy looking at them but usually forget to take any myself

Well descriptive ride out Saul, it looked like a chilled but thrilled day with lots of eye candy on show. I shudda been there!

Yes, your should have!

Next time…possibly this weekend if you’re about (and anyone else, obviously).

Side note for all - don’t forget about the local groups if you’re at all interested in getting people out on a ride with you.

There are some beautiful views along the way but I never stop to take photos. One of these days I’m going to make the trip along some of these regular routes just to capture the finer moments of the journey.

I know plenty of roads and views round there mate, you should ring me

I will. It’s high time we went out on the bikes again.

BTW Saul, you may already know, but that red and yellow Triumph isn’t a custom. It’s a Hurricane, based on the old Trident/Rocket 3 engine. My mate had one, made a tidy old racket

I didn’t know that. Every day is a school day.