Anyone else following the tv coverage? Who made it over this year?
Ooh, that made me mad/glad/sad/happy/impressed… etc

Supersports
Gotta say I’m rooting for Deano and DOA racing (local team), whilst all respect to Dunlop for the win, it’s great to see Deano really mixing it

I think @AndyPandy is there, or was.

I am away in Crete , so on an island but a slightly different/ quieter one.
I have been following the reports on Twitter so I know the results and news . Not a good year in many ways .
I have been over a few times and it is an amazing spectacle but I always feel like I am watching a frightening movie from behind the sofa…!!

I know what you mean @oldskool, seeing Deano on the 600, fully open and getting a squirrelly rear but keeping it pinned

But then there’s the sad loss of 3 people already

My son in law broke his wrist badly a couple of weeks ago. As a consolation present to himself, he subscribed to The Manx Government’s own TT coverage and shared the log in with me. So now I have been watching live racing. Nice.

Been watching the races on ITV4. How can the riders race at those speeds on public roads? Seeing how fast the scenery flashes by, my brain couldnt compute quickly enough, scary.
I havent been to the TT for many years, went over in 78 and 79 to watch Hailwood, think the lap speed was around 118 or so then and fastest top speed was Grantie on the Kawa but that seemed so slow? compared to today.

As impressive as these top riders are around the TT course, I wonder how much they actually keep in reserve? It’s not like circuit racing where you give it 100%.

If you give 100% then at some point you’re going to crash, and you really can’t afford to crash at the TT.

Are the very fastest guys the ones prepared to risk the most?

The fast guys are the ones with the most talent (IMO), but they’re also having to ride closer and closer to that 100% to stay in front.
The latest to die Davy Morgan was on the final lap of his 80th start when his luck ran out, doesn’t bode well for the young guns.
I love watching, but each year I’m hiding more behind the sofa, I think bike development (relating to road racing) is reaching a plateau so as Neal suggests the faster lap times are only possible by increased risk. I suppose some improvements in road surface may be involved but there’s little can be done now to improve safety.
If we’re truthful the risk element is what makes their skill so enticing, build the same circuit with gravel traps, air fences etc and it wouldn’t be the same draw.
But it worries me that so many die for the love of our sport, especially how it is seen by those outside. Or do they not notice, or care? I can’t see IofM stopping the TT, too much money involved.

My wife won’t watch it as she feels it’s wrong to continue with the death rate as it is… but I can’t help but watch, it’s too amazing! I think it’s rare that the riders come back and say “I had a perfect lap!” There’s always a bit of track to improve on (Hicky must have been pretty close on his opening lap, 1st race)

I’ve just come back today from my first TT trip. It’s a bit frightening to watch really. The speed they travel at on dangerous roads is astounding. There’s no leeway, if you come off it’s odds on you’re going to hit a stone wall. Should it be banned ? Well yes it should really. The number of deaths says so. But having said that, it’s such a draw for competitors and spectators alike.

Should it be banned, maybe, but it wont. Certainly something needs to be done as the speeds keep rising, maybe limit the power of the bikes? As I posted previously I havent been over there for a long time, I lost my love for the place when Phil Mellor and Steve Henshaw tragically died and also a few years later Dave Jefferies too.
Now we have another highly experienced icon, Davy Morgan who has passed and 1 other rider and a sidecar passenger, with the driver still critical in hospital.
For me the speeds need to come down and, somehow, safety must go up, even a small ‘off’ can be life threatening or life changing as in Pat Hennen years before.something has to be done.
I’m sure most will disagree with me though.

It is frightening the speeds the riders achieve and as @AndyPandy has said if an objective view is taken it should be banned or changes made to improve safety. However, it is such a money spinner for the island it is unlikely that it will be stopped. It is tragic that lives are lost, but the riders all know the risk and come back year after year.

The last thing that this amazing event needs is the Health and Safety Police poking their noses in. The organisers do a great job in annual improvements to the safety measures already. Nobody holds a gun to the head of any competitor forcing them to ride. Nobody forces the public to spectate, nobody forces those brilliant marshalls to turn out. ANY speed restriction or interference imposed on racing will emasculate it and very soon it will deteriorate into a hasbeen.

Just a point regarding marshalls. While I’ve no wish to diminish the work done by them, my daughter-in-law was maybe a couple of hundred yards further down Quarterbridge Rd from where the French chaps crashed in their sidecar. It set on fire and the marshals attempted to run up the road with a fire extinguisher. They were not fit enough to do so, eventually passing it to a younger(slimmer) chap. In this case I don’t believe the fire killed anybody but I do think some thought should be given to having at least one young fit marshall at each point.

Anyone catch Dunlop’s pre-superstock chat with Matt on the start grid?

Yes, but there weren’t any sub titles so I don’t know what he said. 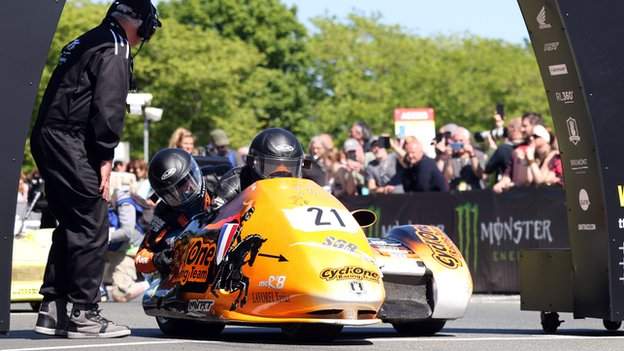 Organisers confirm Cesar Chanal died and Olivier Lavorel is critical after the crash on Saturday.

The riders know the risks all too well. I don’t think it should be banned! What you gonna do, ban rock climbing, parachuting, horse racing? Etc etc.
The danger is part of the thrill, different breed. There are lots of safer options but they choose road racing.

I’d go along with that. MotoGP riders wouldn’t entertain the idea of a circuit that wasn’t safe (or as safe as it can be when you’re approaching a bend at 220mph) but it wouldn’t be feasible to apply the same standards to road racing. Just as with mountaineers and parachutists though, every safety precaution should be taken. Just because they’re willing to risk their life doesn’t mean every conceivable effort shouldn’t be made to prevent them losing it