Jets and Needles in an Amal MkI

New bits ordered direct from Amal. No point in ordering from anywhere else. They are relatively cheap and you know they are going to be the right size. 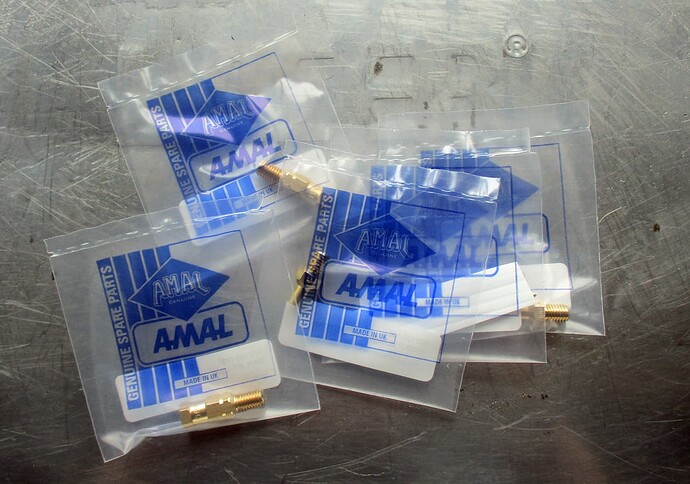 Drop the carb/s off but leave the slides hanging by the cable on the bike. No need to fart around getting the tank or throttle cables etc off. Drain the carb bowl onto the weeds outside in the path by turning the carb upside down once they are off. Weeds don’t like to drink petrol. 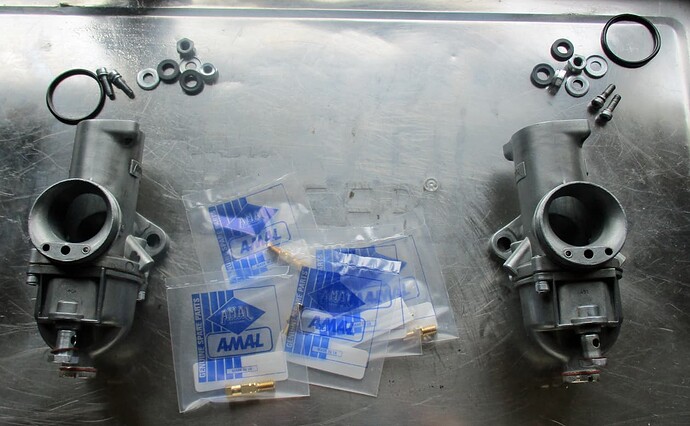 Back to the slides to remove the needle. Pull the spring up and hold them onto the edge of the slide to gain access to the needle. 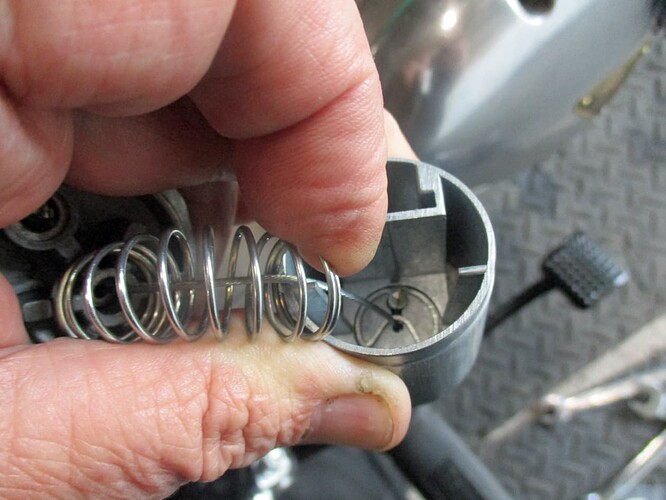 The needle will drop out when turned upside down. Amal needles and their use are identified by the markings at the top of the needle. In this case two rings showing it’s a four stroke STD. 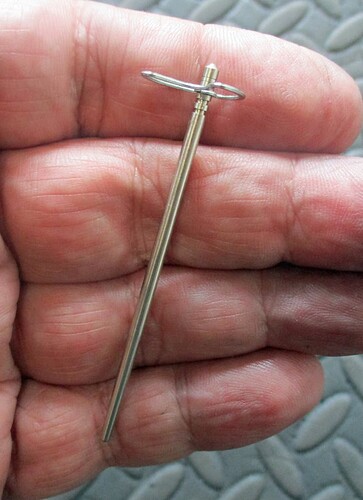 The holding circlip pulls off easily. Here’s the old needle with the new on the right 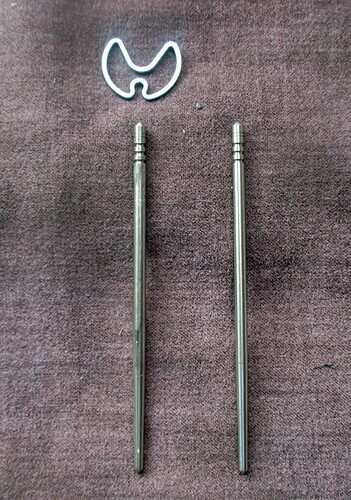 Here again - the end of the needle has been flattened on the old one. This is caused by not feeding the needle into the jet when assembling the slide into the carb (see later). 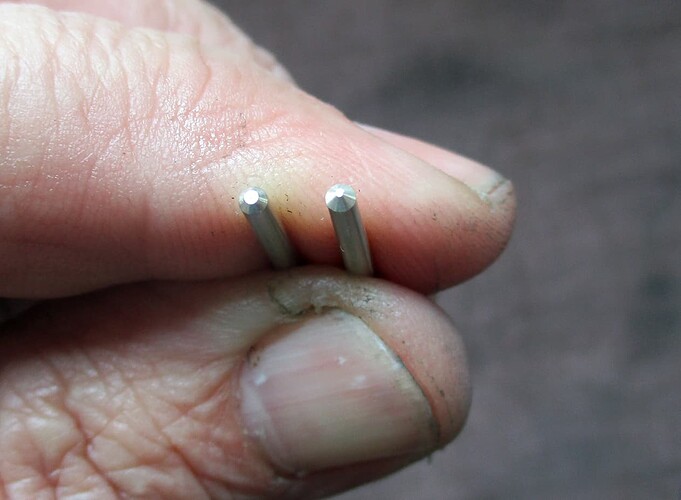 Put the circlip onto the needle at the required notch. The further the needle is down in the carb, the less the fuel flow (ie leaner). The book says to fit the circlip into notch 1 on twin carbs. 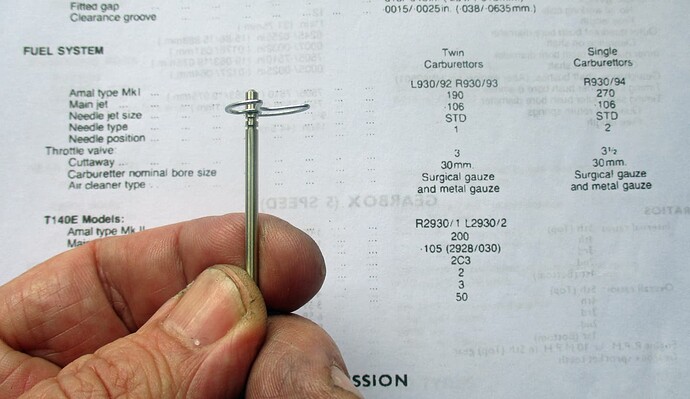 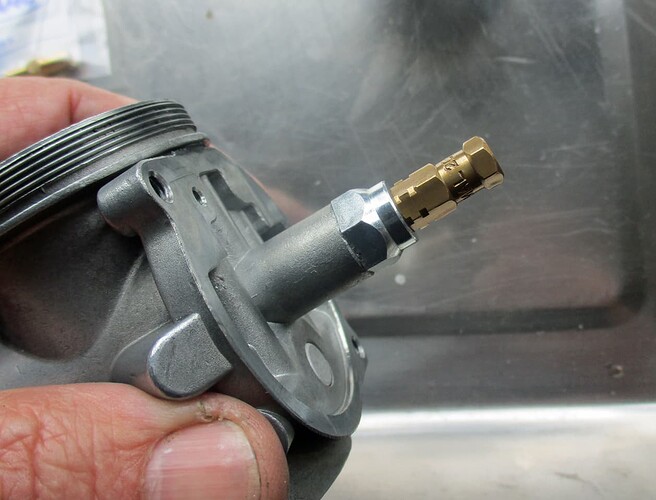 The assembly easily unbolts from the body. 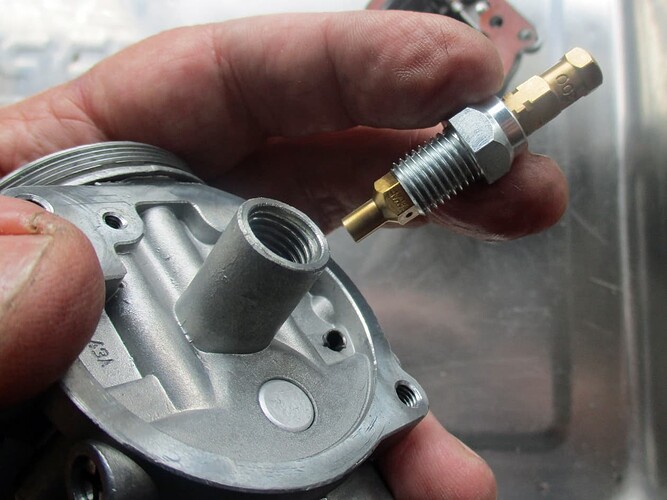 Here’s the needle jet - stamped 106 - which is the correct standard size. But it may be worn (these jets could be getting on for 50 years of use) so replace for the few squids they cost 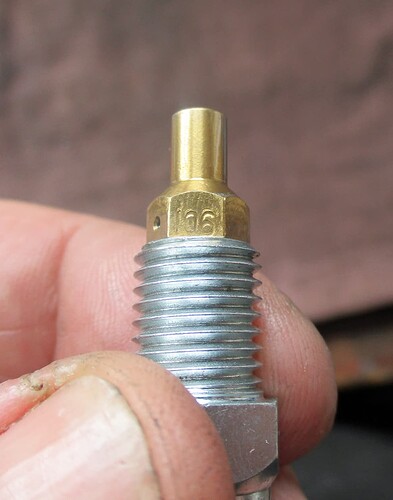 And the main jet - stamped 200 - this is it’s flow rate rather than diameter. The manual says standard is 190. This engine was fitted with the E3134 inlet cam which was the Rocker’s choice of speedier T140s and was probably re-jetted back in the day. The standard cams are now back in this engine as the ‘racier/revier’ cam lobes were chipped and worn and I would just like it to run around rather than race around. 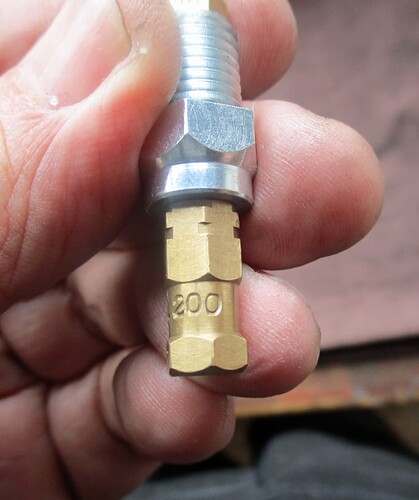 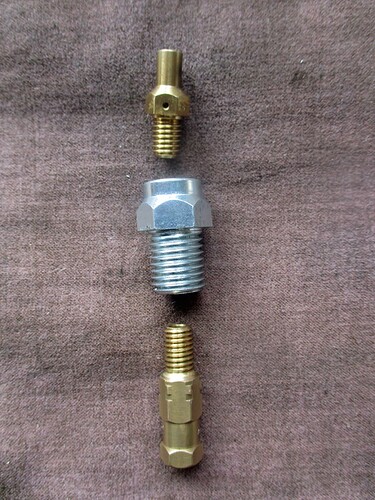 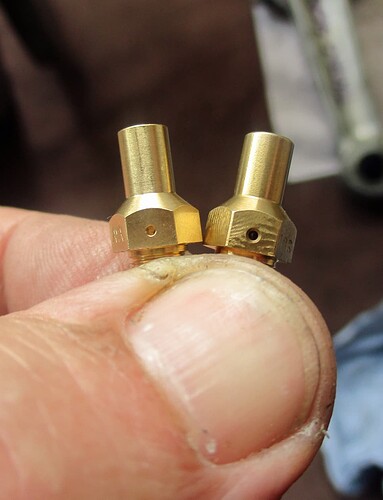 And the main jets 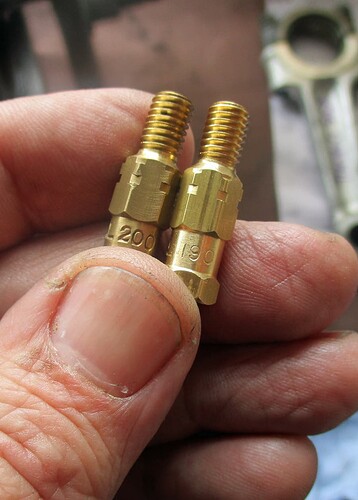 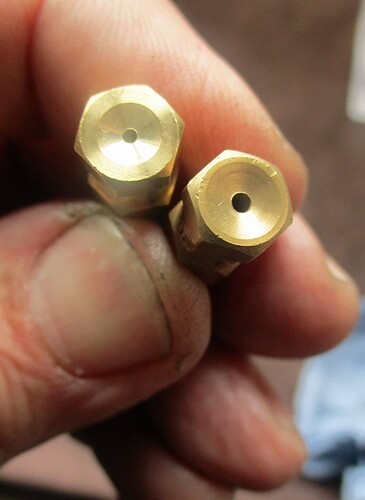 Bolt the new ones in place. No Murphy’s law here, they can be screwed in both ends so make sure you have them the right way round 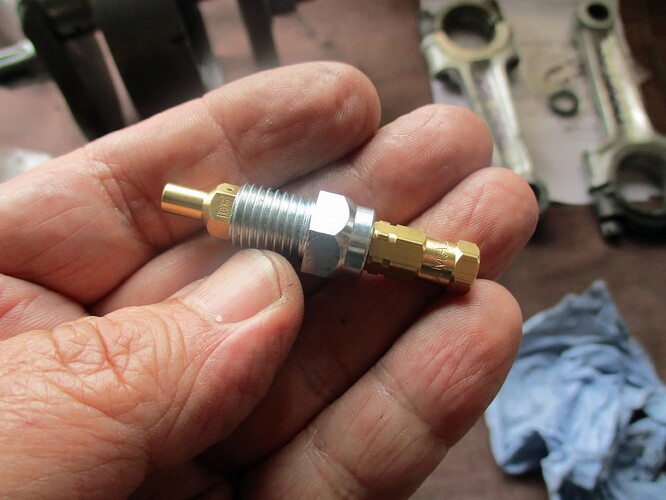 Bolt the jets assembly back into the carb body and reassemble the float bowl. A note that the float bowl can be screwed back onto the carb the wrong way round. Again Murphy’s law allows this to happen and the screws can be tightened up to try to make a seal. However, as these carbs are made out of a metallic form of chewing gum from under your old school desk, they have now probably been bent out of shape and will never seal properly ever again. So keep focused, pay attention… get it the right way round.
Once back together take back to the bike and put the slides back in. Note the key on the slide and the keyway in the body. 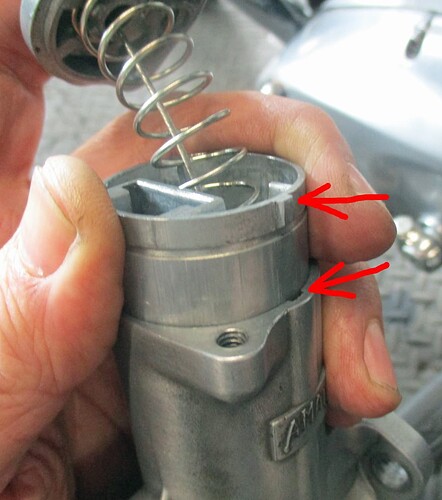 Don’t forget to ensure the needle is lined up to slide into the jets as the slide is being inserted. Check before pushing the slide in or the needle can be flattened really easily. 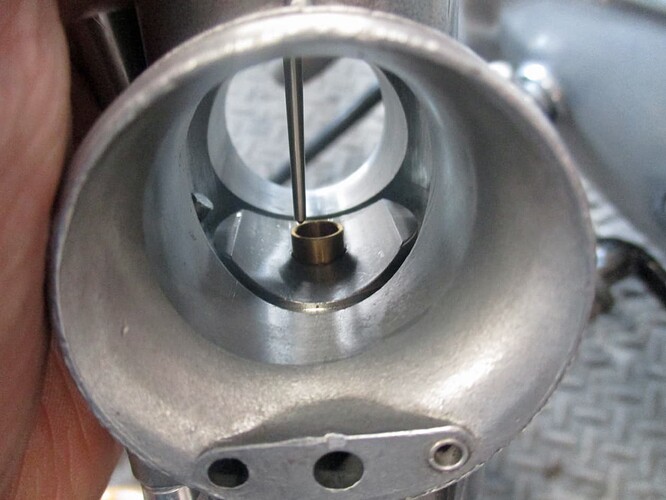 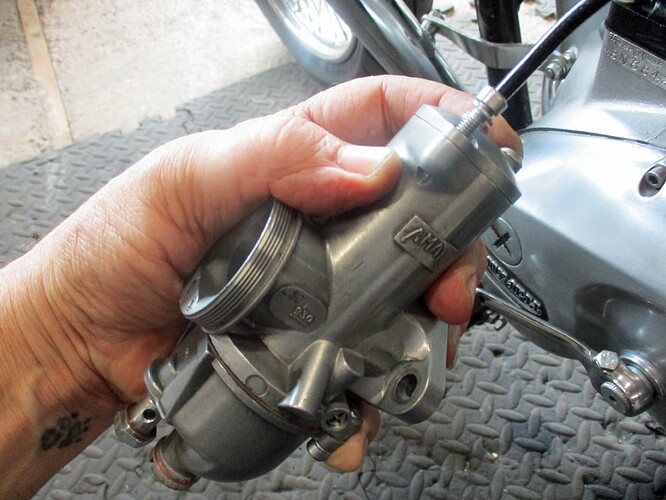 Using the ‘fat’ o-rings - for a bit more anti vibration and less heat transfer from the head. The standard o-rings are on the left for comparison 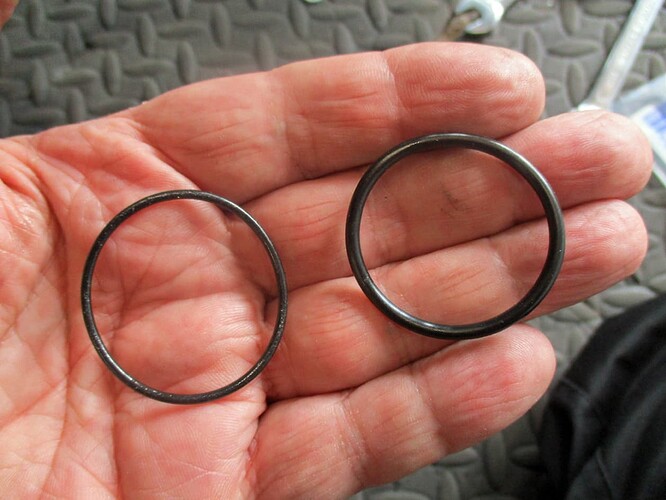 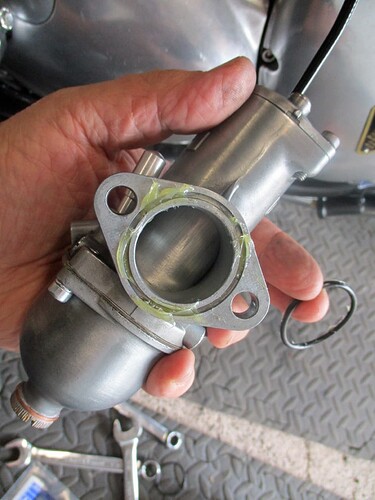 To stick them on while the carbs go back on 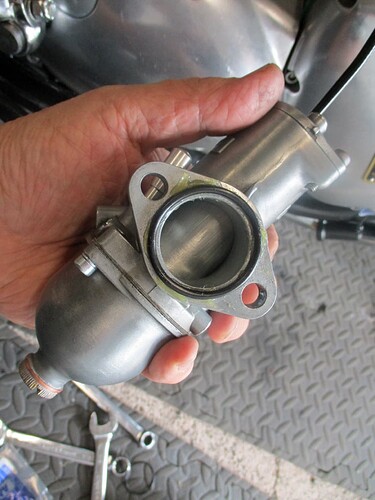 Sorted with some bellmouths, new taps, seals etc and looks the bee’s bollox. 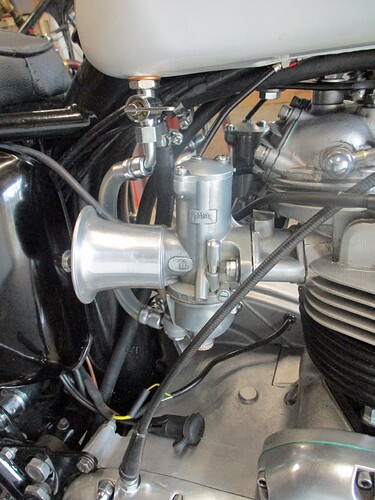 After a good old tickle it started first kick as well.

Runs much better but still spitting a bit of fuel into the bellmouths and pick up from tickover is slow. The fuel ‘blowback’ from the carbs used to be a sign of a lean mixture (although nothing seems to be as it was with the ethanol balls up - apparently you can’t rely on plug colour any longer and it’s totally ruined the paint job on the chop - fuckin annoying that is) I’ll try raising the needles a notch and see what that does. Then I’ll zoom round to Wishy Washy’s place and get him to take the ethanol out of the fuel - seein as he’s giving us anything we want these days.

Q : how do you keep your hands so bloody clean?

Yep, that’s where all the Amal pieces get delivered from when ordering. Don’t expect anything delivered the next day but they are very good. And, yes, helpful too.