Well, it wasn’t “today” … or even yesterday … but on Saturday just gone I finally made a visit to a country “show”.

I’ve never really been greatly inspired by the regional/county/local shows that seem to abound around here - too many tales of overcrowded roads in and out; vastly overpriced and nasty food, and the dubious pleasure of risking wandering around a once green field now turned into a glutinous brown mess by a gazillion Hunter or Le Chameau wellies … not to mention the ridiculous entrance charges just for the sake of providing even more of your hard earned to the local craftspeople. Yeah, I know - me and Victor Meldrew, right?

Well, any road up, meduck, I DID actually think last year of putting a couple of bikes into the Mid Devon Show ‘Classic Vehicle Display’ but I was too late with my attempted entry - fate, I suppose. So, this year I did some early thinking, checking and, yes, even a bit of pro-active planning! Unheard of. I decided to enter four of my early Hinckley bikes as I have had them running and road legal during the past 12 months or so, though they did all require new MOT’s - itself something of a logistical nightmare. I managed to get 3 MOT’s done in a single day but that depended very heavily on the extreme patience and flexibilty of Treen’s in Crediton and the assistance of a Thrucky RS riding friend.

I had my entries accepted some months ago and had to be a little bit … uhmmmmmm … ‘creative’ with the details of the Thunderbird Sport since, technically, it didn’t qualify as a classic since it isn’t actually 25 years or more old! Fortunately, the slight discrepancy in the declared age in years and the year-related registration letter weren’t noticed and the bike was accepted. The others - two Speed Triple 900s and an early Daytona 750 were no problem being 27 and 30 years old respectively.

So, it only remained to find volunteers to help with the logistics of riding them in and back home. This wasn’t quite as easy as I’d expected since, quite apart from any volunteers needing to have their insurance cover the riding of my bikes, the rules of the show meant that the riders were all going to be shut in the showground from half an hour before until half an hour after the event’s opening times. That’s a long day. Added to that the well-known fact that I am a shamelessly dedicated, dyed-in-the-wool and (usually) uncompromising dry weather ONLY rider that would cancel the day’s activities if the threat of rain exceeded the “well it might” rain threshold of the BBC weather forecast for the day with all of the attendant messing about that scenario would cause … clearly, I am very fortunate to have some very patient and tolerant friends!

I relied on the morning forecast that said cloudy with a very low chance of occasional light showers. There really is no fool like an old fool – and I’m 72 so I qualify on all counts, m’lud.

I had wanted to get a few photos of the bikes and riders all lined up and ready to depart but, as is seemingly the norm with me, we were running late so we had to rush out in order to meet up with another friend who’d entered with his 3TA. When I’d tried to enter last year I’d got in mind that there’d be a sizeable contingent of classic 2, 3 and 4 wheeled vehicles - why I thought that I have NO idea since, as I mentioned, I’ve never been to one of these shows. I guess it was just the publicity pics in the event promotion? Anywhoooo … it turned out, on the day, that my four bikes were 4/5ths of the classic motorcycle total entries - the fifth was my mate’s 3TA!! Keep it in the family, I say - an allegedly common theme here in Mid Devon. Let’s not go there, eh?

I won’t bore the pants off you with intricate details of the show but will say that the highlights for me were some of the nice cars in the Classic Vehicle area and the Jamie Squibb motorcycle stunt display - just 2 riders on 450 Kawasaki crossers doing ramp based stunts that were VERY impressive indeed. I think I know why one of the riders was limping around the arena as they were seting up the ramp …

Overall, I’m sure the show was very well worth exploring and it was definitely something I’d do again next year - assuming I can get the logistics aligned and sorted - perhaps with more bikes. One day I might even get a Meriden twin done in time.

Anyway, a couple of pictures from the Classic Motor Cycle area of the Mid Devon Show … 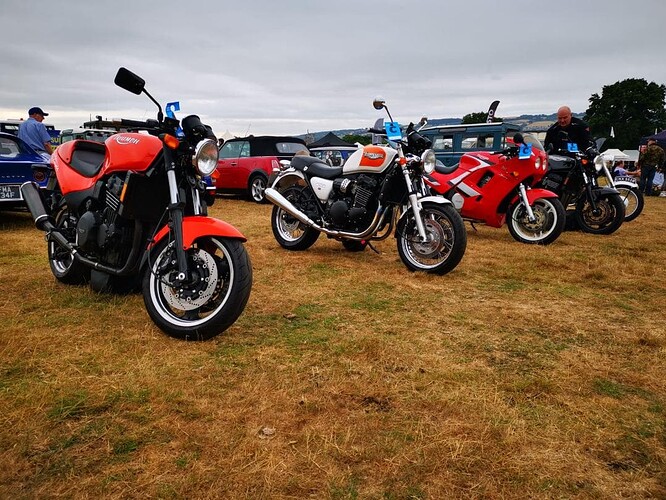 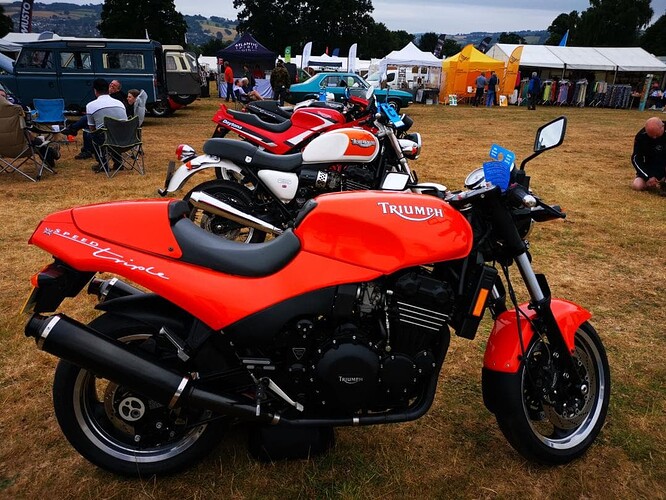 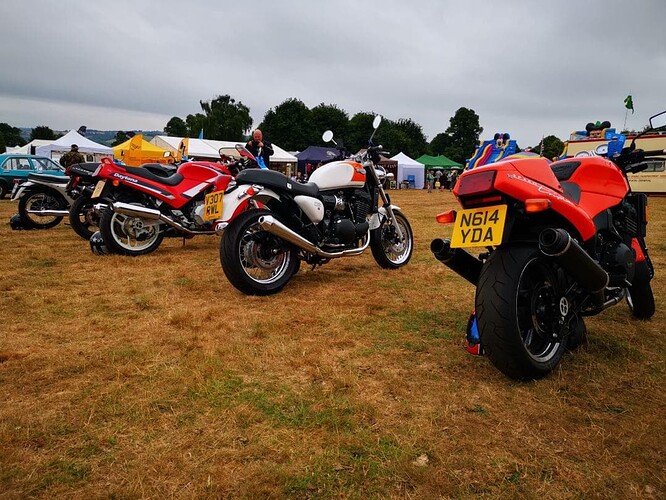 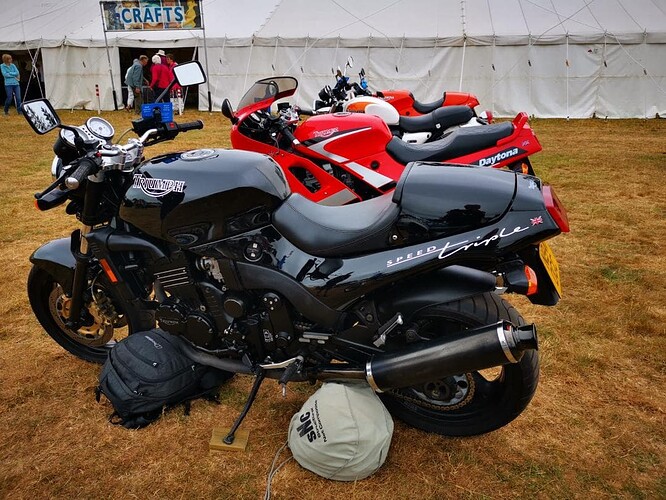 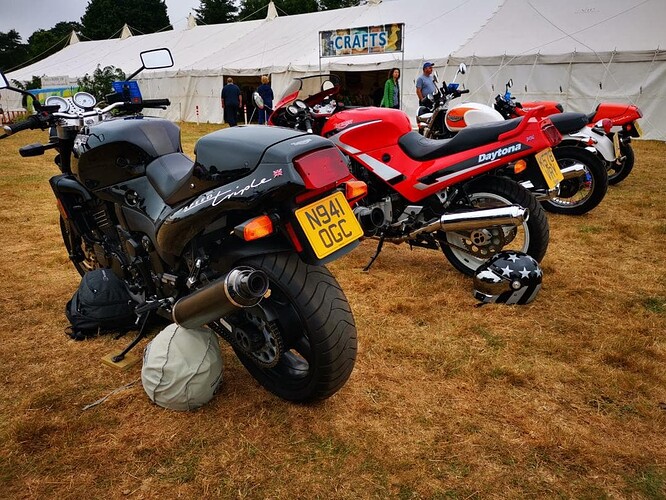 And, finally, the image that will stay with me for the next few weeks as I try to get all four of the bikes back to the state they were in at the beginning of the day … 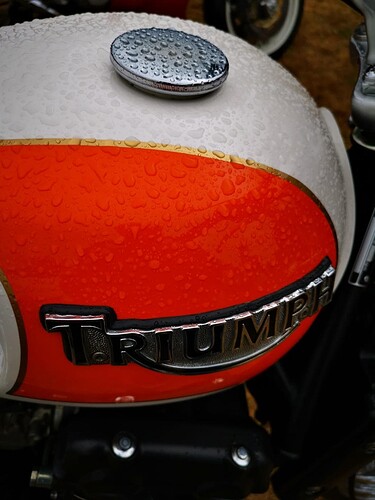 The pride and the fall, eh?

Nice story @AdieP , pity about the rain but I’m sure the bikes were none the worse for it.

Thanks, @Dawsy ! Yes, the early Speeds are really something else - especially the Fireball Orange. I can’t seem to get a decent photgraphic rendition of just how ‘solid’ that colour is - probably time I went back to an SLR and stopped being so damned lazy with the phone camera!

Thanks @Wessa ! I’m really not sure whether or not the bikes are any the worse for the rain but my mental state certainly is!!

The bikes look great, it’s tough to go wrong with orange I think

Fantastic!
A travelling one man show.

Can I join the queue for reserve riders?
Not so much the cleaning/polishing team.

Yeah, @NealH black on black is always a bit mean looking. Ironically, though, in the flesh it’s a lot more ‘subtle’ than the Fireball Orange perhaps because it’s been modified with lower rider footrests; a highly unusual (LUCAS!) top yoke and chrome, tube handlebars. Not exactly a cruiser but a lot less extreme than the original clip-ons and rear set pegs on its stablemate!

I might well take you up on that @Col_C - you’re West Country based, aren’t you? There’s definitely no queue - or reserve riders - I almost press-ganged the volunteers this year. It was definitely worth doing and I would do the same again next year if I can - hopefully with at least one more bike to enter!