Muppet at the wheel

It’s a beautiful day (even in Yorkshire) so I pulled the Street Triple out of the garage for a quick run down to my favourite coffee shop, about four miles away, this lunchtime.

About halfway along the road that drops down to the Holme Valley and Holmfirth is a crossroads on a blind bend. You can’t see the road coming from the left until you’re on top of it. There’s a mirror opposite that I check on the approach but even so I’m always very cautious in case someone is pulling out. 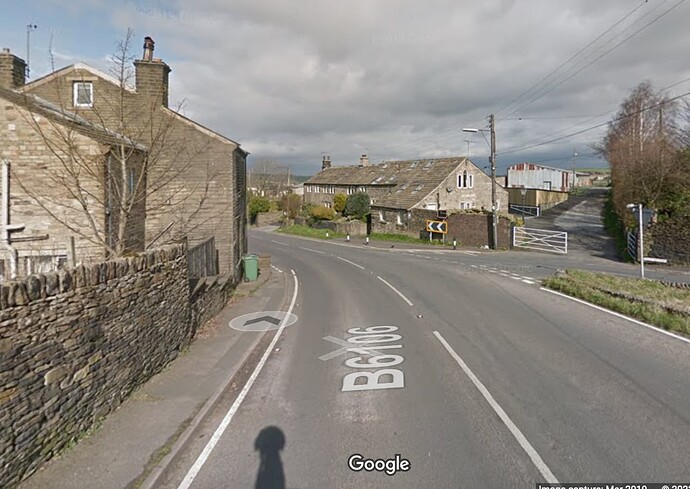 As I came around the bend today I was confronted by a car just beyond the junction reversing back up the road because he’d missed the turning! I hit the brakes and pulled up in plenty of time but there was no stopping my incredulity. I stabbed the horn to say, “Move it, buddy.” In response he just indicated left (yeah, he wasn’t indicating either), so I pulled up next to his window and shouted, “Excuse me!” with the intention of, sternly but not angrily, pointing out how dangerous it was for him to reverse up the road like that. Because I was on a bike he probably felt intimitaded, because he ignored me and continued reversing. Unbelievable. 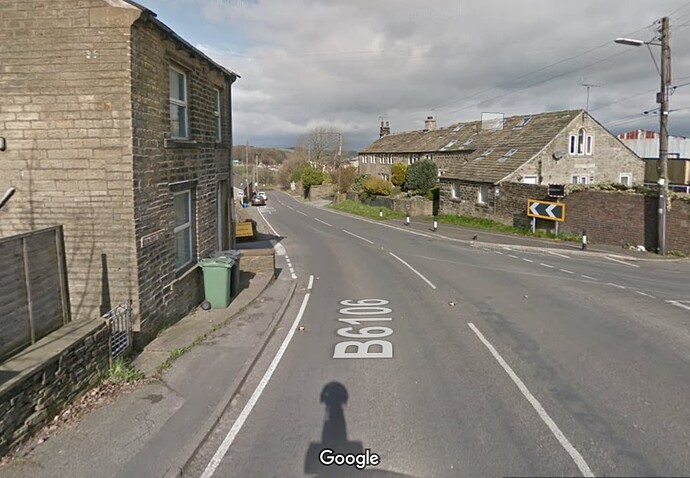 Sounds like your common or garden knobsack, the pied-knobsack tends to stare you in the eye before pulling out on you… another unpleasant form of attack!

I was waiting for someone to comment on the shadow but I hadn’t considered it that way.

My first thought too😂

Aye and you’d probably be pinned with the blame for rear ending him!

I’d be interested to hear him make a case for why he was stationary, let alone reversing, on a blind bend.

You would think common sense wold prevail. Normally if someone gets hit from behind its almost automatically the person behinds fault. I bet the car drivers insurance would try their hardest to argue that you were going to fast to react on a blind bend. Just as well you got stopped and just a reminder of the absolute brainless morons let loose on the road.

It seems to me that every time I go out on the bike you get a knob doing something stupid. Standard of driving today is just pants.

Had a similar experience-with a car transporter. Missed the turn, anchored up, slapped it straight into reverse and ran through my radiator. Oh how we laughed…

If they ignore me i just follow them for a few miles / home and stop outside their house, maybe take a photograph of the car/house on my phone. They sleep with one eye open that night.

It’s not just car drivers, though. One day last year, I was driving my van along the A75 towards Stranraer. It’s a fairly busy road with limited safe overtaking opportunities and a silly 45mph limit for the HGVs heading to and from the ferry at Cairnryan. I was stuck behind another van which was behind an HGV, and there was a long tail of traffic behind us.
In my mirror I saw a couple of bikers steadily leapfrogging their way up the line of traffic, as one would. However, by the time they were just behind me, we were all very close indeed to the brow of a hill, with no view of what might be approaching. To my amazement, one of the bikers decided to play Russian roulette, and passed the two vans and the HGV. The road isn’t very wide at that location, and he was well into the opposite carriageway. “For f*ck’s sake!”, I said to myself. Then, by which time we were even closer to the brow of the hill, his mate obviously decided not to be left behind, and took off after him. “Bloody hell!”, I remarked.
Both bikes had Northern Irish plates, and their riding was absolutely suicidal. Although they got away with it, given the volume of traffic on that road that day, I would say that they had about a 1 in 3 chance of killing themselves, and maybe someone else as well. One more statistic for the ‘motorcycles are dangerous’ narrative.
I lost my own belief in personal immortality quite a long time ago.

It’s not the vehicle, its the person driving/riding it. The difference is that some machinery is less protective than others and the risks are greater (where risk = probability x impact)

Agreed. In motorbike circles, there seems to be a general belief that we are better than those idiots driving cars. But in fact nearly all bike riders are car drivers themselves most of the time, so there are plenty of idiot bike riders.

We have a fair few muppets here in NI right enough… usually can be found on the coast road during the middle of a summers day. I stay away from it during the muppet hours for that reason.

Some insurance companys will give bikers a discount on car insurance. That tells me statistically, bike riders do make safer car drivers and I would agree with that statment. There are always exceptions though.

I know that riding sharpens my awareness when I’m driving too, but not everyone is the same.

The last few weeks down here in Cornwall it seems like almost every day there’s a report of a road closure due to a car and motorbike collision. Holiday makers with brain out, and if the bikers are local they should know better this time of year to be ultra defensive. Of course the bikers could be on holiday too, be careful if you’re riding down here this month.

Those Cornish hedges can be a hazard with emmets driving too fast on the local roads.