The new owner of Oldham Athletic Frank Rothwell decided to attend the first match of the season away at Torquay on his trike accompanied by his wife. You may have heard of Frank, he rowed accross the Atlantic on his own last year to raise money for charity. Unfortunately the trike broke down, see the report here. 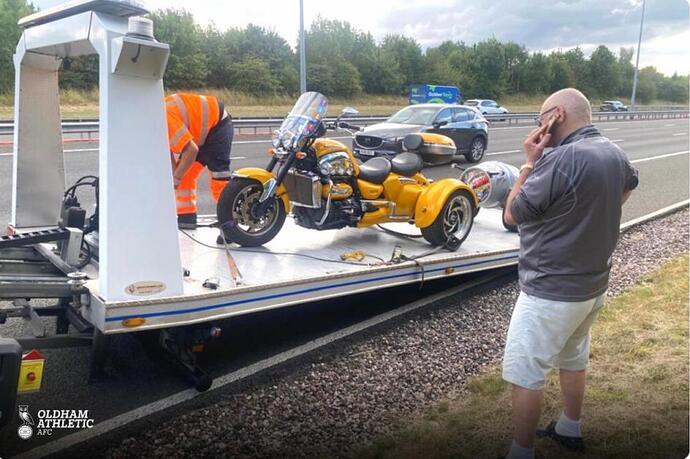 Latics owner Frank makes it to Torquay after motorway breakdown

Frank Rothwell has made it to Torquay after breaking down on the motorway.

That is bad luck.

Well, I’m no engineer and, obviously, don’t have any idea whatsoever how well the trike conversion was done, BUT … I can’t help thinking that, having seen a RIII drive shaft, this was probably a disaster just waiting to happen!

You’ve got a 2.3 litre engine delivering (at least) 140 horsepower and more than 145 ft.lbs. of torque through a (from what I’ve seen) fairly small diameter drive shaft to the rear wheel. In standard motorcycle form, I assume that this would be through a direct bevel drive but on a trike it would need a differential and half shafts to each of the two rear wheels … and from the photo’s in that article it looks like these are pretty wide wheels - that’s a LOT of grippy rubber to try to turn. And that’s only the start of it … a passenger, a top box AND a sizeable trailer all add weight to the task to be undertaken. Do you figure that he’d never really use all that addictive power? Nah, me neither.

I fear that this was an unscheduled event that could have easily been foreseen - a disaster waiting to happen.