I’ll have to caveat mine with the fact that outside of a couple of 125s, the Suzuki Gladius and Suzuki SV650 (training big bikes) I know nothing and am still in “over excited” territory when it comes to biking

LIKE: Hard to pick any one thing (see above caveat) but I would say the usability of it; it’s smooth and confidence - inspiring at low speeds and massively exciting at higher speeds. Another caveat - my idea of spirited riding / higher speed is commensurate with my limited experience!! I do not feel like I could outgrow this bike.

DISLIKE: The beautiful looks (form over function, says @HelmutVisor) mean that the short tail / lack of rear hugger do bugger all to stop everything the bike may travel through being thrown up the back of the rider and seat. When I have ridden in the rain or even just on a damp road I am covered in dirt all the way up to the top of my helmet and the only clean place on the seat is where I have been sat. This certainly is not enough to deter me from riding the bike, it just means that I have to do a lot of cleaning of bike and kit

If I can only say one thing to like I’d say performance, because that covers everything from engine, handling, comfort

its all really good!
Bad thing… I wish it wouldn’t default to road mode if you leave it in track, thats annoying! And you can’t put it in track on the move, you have to be stationery

but just for the sake of being different I will go with:
Like-everything except,
Dislike-keyless ignition. A totally pointless gimmick

Does the engine cut when you’re a certain distance from the key or only refuse to restart once it has been turned off - e.g., could you start the bike, put your key on a petrol pump whilst you put gloves on and ride off very far, only to turn the engine off and be unable to restart?

It’s hard to just limit the likes to one thing, but if I have to pick just one, then it’s the engine. It’s really powerful, yet remarkably flexible. You could just leave it in 4th gear and it would be an immensely fast bike from 30mph to 130mph. It also makes a magnificent noise and for something so powerful is remarkably economical.

My dislike is the overly stiff suspension. Much has been made of the 1200 RS being overly stiffly sprung for the road, and I sort of agree and sort of don’t. The Onlins is fully adjustable and much of the stiffness can be adjusted out if you take the time and effort, and if you soften it off beyond Triumph’s “comfort” setting then it becomes acceptable on the road, but it’s crazy that you have to soften it right off to make it workable on the road.

I would imagine it will run but not start when switched off.
Only had the bike for 5 weeks but just don’t get the point of the keyless crap

I do agree about the keyless crap. I see no actual advantage to having it and it’s just another unnecessary gimmick to potentially go wrong.

For my Bonneville Speedmaster I love the looks and hate the lack of ground clearance.

Got plans soon to go under and deal with rust from scraping the frame multiple times. Last time was coming out of a petrol station where there was an abrupt change in level, almost beaching the bike

Don’t want to add bash plate because that would take away even more clearance.

I love everything about the Nightstorm, if I had to pick one specific then looks …no, comfort …no, relaxed riding …no, size…no, sound…but hate the lack of parts out there

I love almost everything about my (relatively new to me) 900 Thunderbird Sport - the sound, the feel, the comfort … BUT I do have some serious misgivings about the rear light unit and the horn cover. They are each, to my eyes, a Prince Charles-type ‘carbuncle’ on an otherwise lovely package.

I’m down to just my Bonneville SE now, which is adequate for what l need a bike for at the moment.
Like: the looks.
Dislike: it’s a 64 BHP engine…

When I had my 2010 Bonneville America the thing I liked most was it’s looks, it was “bootiful”. 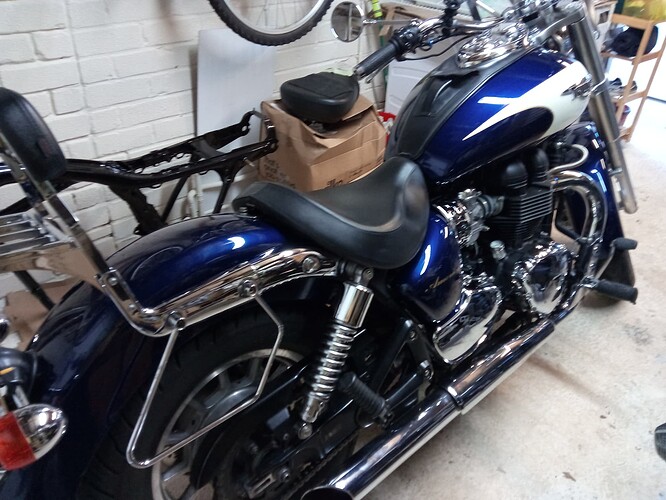 Having lost my keys at a petrol station once I like it! (I had them with my gloves when I went to pay and they dropped on the floor for someone else to unknowingly kick them under one of the display units in the shop). Now my fob is permanently in the trouser pocket of my textiles so I can’t loose it. I have a spare without the transponder that cost £15 on the ring that has my house and lock keys on so I can operate the satnav, seat and luggage locks with that as it’s been known for people to put their key in their top box, forget about it and ride off only for it to fall out which can then turn into a disaster. There’s not much point in it unless the fuel cap is keyless too as you then have to find your keyfob to unlock the cap. If it is then again it’s all simples…ride to pump, switch off engine open fuel cap, fill up, close the cap, pay, ride off
One security advantage is that in places like Londongrad bike thieves will come up next to you at the lights on a stolen scoot, the pillion will lean across, steal your keys and they then ride off. One of their mates act as a spotter so when you’ve pushed your bike to the side of the road unless you stop with itp until recovery arrive they then return with the key and ride off. Even if you get it recovered they’ve still got your key so it’ll cost a big wedge to keycode another and might even involve a new ECU

The main dislike on my Sprint ST 1050 is the clutch (command + feeling).
The clutch cable runs near the engine in the fairing, and when hot the cable is a bit longer. On long rides I adjust it while riding. As I have a few bucks in my pocket, I will probably put an hydraulic kit.
And the clutch itself is not the sweetest one, sometimes sticks, etc.
The like is the ability to ride fast effortless, and the handling is great.

I like the full package of my tiger 1050. The only dislike is it is a little top heavy when moving it around.

I can’t think of anything negative about my Thruxton R since I put the flat bars on. It is just a delight to ride.

Liked, riding it to the Alps and Provence last week.
Dislike the fact that I’m now back home.
Oh well, Scotland trip for four days next month.

Like:
As with all Triples, the sound. Mine had the Arrow lowboy on it when I got it but combo of the induction sound and the whine are highlights for me.

Dislike:
The plastics on the tail section are a bit creaky. Must see if I can add some material to sort it.

One like about my SPEED TRIP RS : Everything
One dislike : Nothing …

In all seriousness,
Like: Performance in every way ( is that one ??)
Dislike: Keyless Ignition .