OOooh, that sounds awesome (NOT)

I’m imagining the scene in Le Mans campsite in years to come…
Gone are the chainsaw engines being rev’d to destruction, in their place hooligans walking around “revving” their cordless drills…
(Until they need to find a charger)

I’m looking forward to seeing these things in the flesh. I’m quite tempted to get one.

But it’s probably gonna be the same thing. I see a new model Triumph, I go down Fowlers to have a look and come away really unimpressed with both the bike and the cost.

I think I’d agree with just about all of that.

Its a well known fact, anytime a man lifts a cordless drill it is required to give it an obligatory 2 revs before commencing any work!

I wonder whether a sound system that replicates the noise of a MotoGP bike will be on the accessory list?

One things for sure, when it is launched the price will make your eyes water!

Even a montage of fart machines would sound better than that, I’ll pass.

Interesting, I think I will wait and see how things develop

Triumph are saying it’s a weekend toy rather than a commuter so keeping away from competing with any work travelling electric mopeds.
It’s been estimated good for 120miles will produce 175bhp and £15,500. No gears, twist and wheelie, sounds like fun. Could take the sound card off of a radio controlled model and make it sound like Flash Gordon’s attack space ship or Darth Vader’s TIE starfighter or a Merlin engined Spitfire or… Hmmmmm…maybe

Probably sensible to come out from the start saying it’s for fun and frolics, like an electrified Speed Triple, perhaps. I wonder what the torque and power-to-weight will be like.

Definitely worth a test ride, and if they can make it sound like a TIE fighter I could be in…

When do we ever use all those horses, anyway? My Multistrada would log the power I was using on a ride. I rarely used everything on tap, and never for long, because hedges.

The technology is still considerably not good enough to make electronic transport practical in my opinion. No doubt it will be amazing some day.

It depends on what you mean by ‘practical’. With a range of 125 miles I could ride to work on it and recharge overnight, no problem. Popping down to Yondermann’s for a fry-up would work. It’s the longer trips that start to become inconvenient because of the charging times.

I’ve got a hybrid car that does about 20 miles on the batteries. The engine never starts for most of my trips to the local shops. Over lockdown I didn’t put petrol in my tank for six months.

By practical, I think of like this… I couldn’t use it the same way I use my petrol bike. Even if I could, it’s not going to be as good, it’s going to be heavy for what it is. Also, to get that claimed range, I bet you’ll have about half of that claimed horsepower too.

Not that you always need them or that they need to be always on tap but i wish for once manufacturers would stop giving the “headline/ Byline” figures. It should be maximum range at a third of power and how long it could sustain 175 ponies before flat.

Sure, it won’t work for everyone, and I wouldn’t consider not having a petrol-powered bike for the forseeable future.

The engine is light, 15Kg compared to around 60Kg for a four cylinder petrol engine but of course the battery is the chunky bit. Triumph say the bike will weigh 220kg, so about 20kg heavier than a Speed Triple RS. At 109Nm the torque is a bit down on the Triple’s 125Nm as well but that torque is immediate so I imagine the ride with still feel quite, er, spirited.

None of it matters anyway. It’s only ever going to be a test bed. It’s not going into production according to this 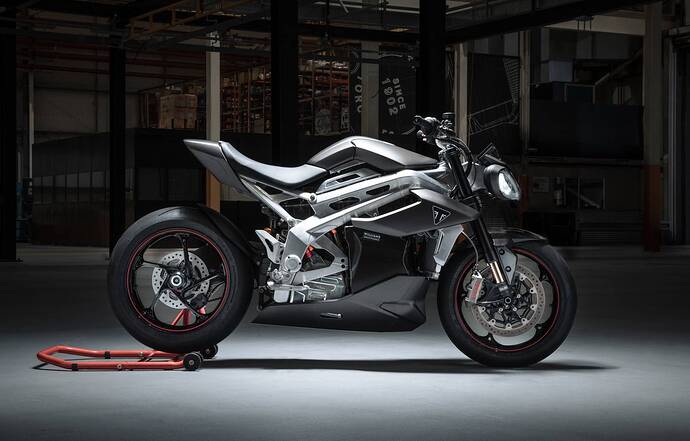 I’m reckon they’ll produce something but whether it meets the full prototype spec remains to be seen. That trick engineering from Williams probably doesn’t come cheap. Announcement next month, apparently.