To insert a quote from another post when replying to it, highlight the text you want to quote with your mouse/finger first, then click the ‘Reply’ icon on that post.

To insert a quote from another post when replying to it, highlight the text you want to quote with your mouse/finger first, then click the ‘Reply’ icon on that post.

I just had to

I just had to

Any idea why it now automatically deletes what you try and quote? @Octoberon 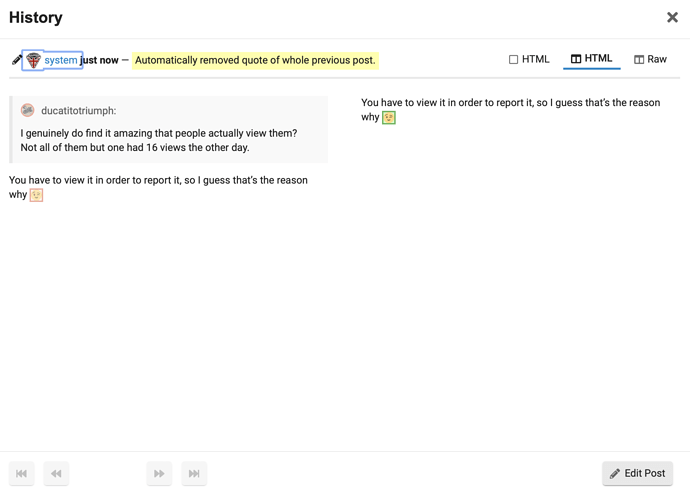 Any idea why it now automatically deletes what you try and quote?

It says it removed quote of whole of previous post. I guess it doesn’t make sense to quote the whole of a post, usually in text communications you quote the part you are replying to, perhaps it is trying to encourage that? Having said that…

It seems when hitting ‘Reply’ on a post, there is no visual indication on the result that it is a reply, except in the odd post on the forum I’ve seen replies that are shown indented under the post they are replying to, which is what I would hope and expect. But it doesn’t seem to happen for me or for usually others I guess.

Here’s how it works.

… THEN we remove the quote.

There’s an ‘up’ arrow in the top right corner of the quoted text to jump to the original post.

I just searched for an example where replies to a post are shown with the post, here is one…

Running the forum The Speakeasy

Early days but I’m liking this format! Will take a while to find my way round and learn the different features. Hopefully it will grow into a great forum

It has a dropdown box under it marked ‘2 Replies’ which if you click on it shows the replies.
Now, those two replies are in fact the next two posts in the thread which are already been shown.
I guess what the forum software is hiding the fact the post is a reply if it’s replying to the previous post?

Edit, actually, the first post in this thread is an example, and I’ve also just noticed the arrow Octoberon mentioned to ‘go to the quoted post’. Also, for quotes there’s also a downward pointing chevron for expanding quotes. 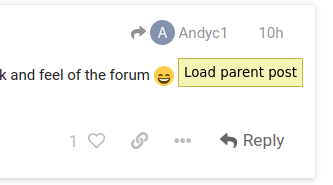 (That pic may be ambiguous, the ‘Load parent post’ text is a tooltip popup when I hover mouse over the Andyc1 bit above it).

It doesn’t show this for the first reply, so there is no indication it’s a reply to the previous post. This is a candidate for an entry in the 1st World Problems thread

. UI’s that change depending on context so you have no clue as to what’s going on.

If it’s a reply to the post immediately above then it’s implicitly so no link needed as you would read top to bottom as a connected sequence of posts by default. If a reply is to a post further up, you’d need something to indicate which post the reply is for. The other forum doesn’t do this and I’m sure we’ve all seen the occasional misunderstanding or confusion because it’s unclear what’s being replied to. Here that’s never a problem, even without quoting, because there’s a reference added to the post…

It’s a consequence of a flat message system rather than a fully threaded one, which gets very messy. Just look at Reddit.

It’s a consequence of a flat message system rather than a fully threaded one, which gets very messy.

I guess it’s the fact that Discourse feels like a hybrid that’s confusing me.

Despite what may seem like griping, I do appreciate your work here, and I consider this an improvement to the other place.

Thanks. I knew there would be a learning curve, particularly for people who come from TTF, but I decided that being a slave to that place and its functionality wasn’t the way to go.

I do appreciate your work here, and I consider this an improvement

You are not alone…

You are not alone…