By eck I’ve a pile o shite I can’t pair with my iPhone 13 but can with older 7. I’ve a sena SRL2 in a Shoei but it just doesn’t come up. Is there anyone that can help and by that I mean actually do it for me like a shop or summat as I’ve run out of ideas?

Have you updated the sena firmware?

Not sure if I can fix the problem but if you want a hand trying to work it out let me know.

@Andyc1 Updated helmet last night and still won’t work
@Octoberon how about i call round ?

Theres a reset switch on the srl, stick a pin in the hole beside the battery. Also, delete any pairing of previous phones. There are different pairing modes on the srl too, mobile phone, second mobile phone, intercon, universal intercom, remote, sat-nav etc.
Shite those iphones

Anything worth looking at here

Looking for some video tutorials on how to use your Sena #product_name#? Visit our videos page to discover all the amazing features of your new Sena product. As an industry leader in Bluetooth communication and video recording, we pride ourselves in...

Looking for the Sena #product_name# User's Manual? Visit our documents page to find all the support you need for your Sena. As an industry leader in all things Bluetooth communication and video recording, we pride ourselves in providing the best...

Can’t remember but are you sure about that, not even through the app? Actually can you connect via the app? There’s all sorts of settings you can change that way that you can’t via the srl alone.

I’ll be around later this afternoon and evening. Out for a chunk of tomorrow but I can let you know when I’m home if today’s no good. Or Sunday should be ok.

Can’t remember but are you sure about that, not even through the app? Actually can you connect via the app? There’s all sorts of settings you can change that way that you can’t via the srl alone.

Whats the ride connected app? That might be the source of your problems

That I don’t know nor ever had it. I did a check first to see if I downloaded from the App Store

Ride connected is another app by the look of it, here it is on the app store 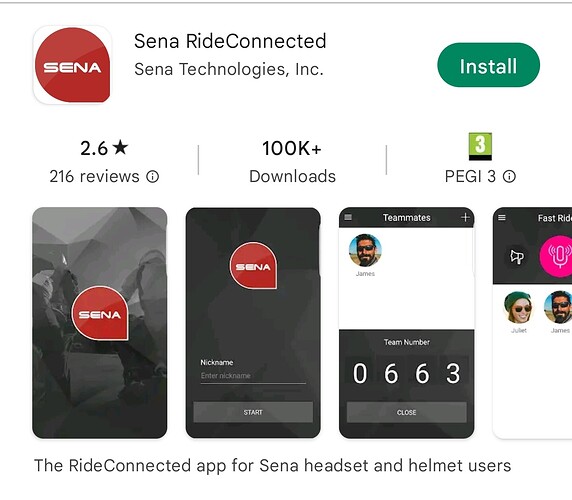 Try uninstalling that from your phone. The only app you need is sena utility

No updates. I did delete it off my phone and reinstalled it. It’s just not playing. I don’t know how a company like sena operate as when you look in community forum it’s nothing but angry people with problems and zero response

Is this a common problem with an iphone 13 then? You would think if it was there would be some sort of fix by now. Never had a problem with mine, actually found out how to properly do a group intercom after we got back from scotland

Is there any Bluetooth or even privacy settings you can change on your phone?

It’s strange, the phone was bought new in October and the last thing to pair was a Bluetooth for a blaupunkt radio after that date in mid November so as for any privacy settings it honoured the radio without any problems.
There’s a lot of people with successful pairings of the iPhone 13 to Sena but then also there’s plenty of complaints.
The sena apps are rated all similar on the App Store as totally rubbish like
1 1/2 stars out of 5 and all the reviews are like don’t touch it with a barge pole so sena as a company aren’t interested in after services.

I’ve just bought another helmet which is a HJC premium carbon fibre and ‘Bluetooth coms ready’ to which they say fit sena!!

Here are all the pairing modes, try a few different phone ones, the selective modes limit some features like if you don’t want the phone for music iirc. But the first thing I would do is delete all pairings! Turn everything off and on again and then try it. There has to be a way 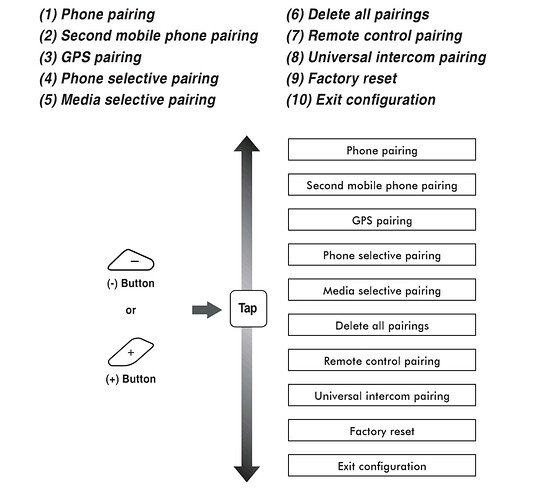