So, I was just thinking…. I’ve not seen many 1200RR’s out and about.
Back in March I popped into a dealer to enquire about changing my 1050 RS to a RR. This was not long after it came out. Basically he wanted to rob me …! So didn’t even test ride it.
Funnily enough the sales guy said he would call me to try one this summer and he never has…
So I just looked on MCN second hand bike page and I was surprised by the huge variation in values. There are bikes with very low miles on them, and the prices vary from £13895 to £18499.
So to my mind having seen so few on the road, did Triumph get it wrong in the design ? I did sit on one and the bars are just too low. It’s neither a full on sports bike or a Speed Triple in the familiar style we’ve been used to.
I love the looks but feel that a bike with more upright riding position and a similar styled fairing would be just what I want….

I rode one and wasn’t impressed. Yes its fast! But it was very vibey, fancy suspension didnt feel as good as well set manual suspension and I spent some time playing with all the settings. The dash is slow and annoying, not acceptable on a premium bike. It was also slow to turn but planted at lean. It would make a beast of a track bike but its not for the road.
My absolute favourite is a gen2 superduke. Its soft, roomy and seriously quick.

In the flesh the 1200RR is a fabulous looking bike. I’ve not ridden one but that riding position looks far too extreme for me and I wouldn’t be tempted to swap my 1200RS for one.

I too would love to have seen a tourer based on the 1200RS (like the Tiger Sport 660 is to the Trident), but as I’ve just ordered a Tiger 900 to sit alongside my Speed Triple, I think that’s me fully sorted for bikes

Neeves on MCN has one on long term test this year, he’s reported that it’s not a bike he’s gelled with, I think primarily because it’s so uncomfortable as a road bike.
I also think Triumph are struggling to sell it (is that why they did the Bond bike to try and drum up some interest?), there’s a dealer selling brand new this week at significant discount… 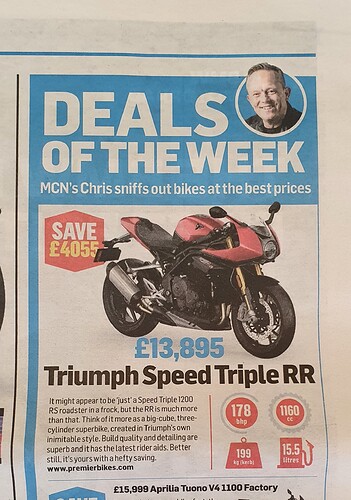 So those second hand sales will struggle!

I just checked out the premierbikes.com website out of curiosity. They have a used one at £13,895 - looks like an ex-demo bike with 261 miles. Huge saving on new, but not a new bike so a bit misleading there from MCN.

Normally Triumph seem to get it right, but I think they went in the wrong direction creating this expensive track day bike. IMO
They’re missing a much better opportunity, should’ve created a sports tourer from the 1200 Speed Triple much the same as they’ve done with the 660 Trident (which MCN voted bike of the year).
I had the Sprint ST 1050 with full luggage for 5 years, great bike, they need a modern day version of that.
Sports Tourers are on the rise again, Kawasaki SX1000, Suzuki GSX S1000GT…
Come on Triumph pull your finger out.