Street Triple R Review (from the perspective of a new rider)

As requested I’ll write a review of my Street Triple R, it does need to be understood that this is my first big bike so will be very much from a novice rider’s perspective.

I started riding in July last year when I did my CBT, I then rode a good few thousand miles on two 125s (not both at once - that would be rollerskating!!) and trained and passed Mod 1 on a Suzuki Gladius in December and passed Mod 2 on a Suzuki SV650 in January this year that I had only got on the morning of the test - infinitely preferable to the Gladius was my impression for the two hours I rode it until my test and on the test itself.

My bike is the Street Triple R LRH (low ride height - bought as I am not particularly tall and I wanted to be able to flat - foot my first bike for confidence. The LRH has a seat height of 780mm which is the standard seat height of many middleweight bikes, so it is not especially low as bikes go).

I chose the Street Triple on advice from @HelmutVisor (my first thought had been an SV650) and from reading reviews and then going to Fowlers to sit on a number of bikes to see how they felt. The three main reasons for my choice were as follows:

I passed my test at the end of January, managed about 700 miles up until the end of April as the weather was so horrible at times and then in the past month or so have done about 1400 more.

I will struggle to document the main positives as I want to say almost all of it, but I’ll try:

The negatives (small ones):

Changes I have made / things I have added:

In conclusion I am beyond pleased that I bought the Street Triple - it seems like the perfect fit for me and, as I build my experience, I appreciate more and more exactly what it is that I have. I have had two people voice their concerns over having it as a first big bike (not people who know me well) but I think it’s an absolute cracker of a first one, treated with respect, and I am sure my skill level will never outgrow it. Mainly though I just want to be out on it all the time which is surely all that I could ever want!! 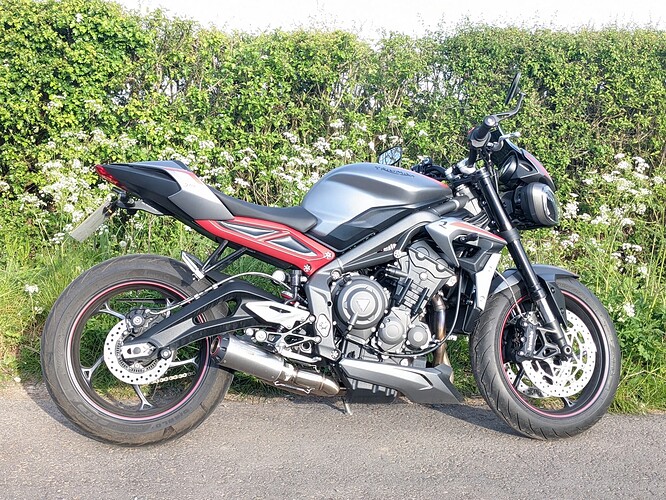 Brilliant! Thanks for taking the time for your thoughts!
On motogp earlier, hodgeson had one around catalunya for his track guide.
Sweet

Another comprehensive review. It is great to hear that you are so pleased with your bike and I hope you have many happy riding miles

It is an exceptionally good bike! I went from 1050 speed triple - superduke ×2 back to a street triple. By no means is it a ‘beginner’ bike. And it will excite you nomatter who you are. It does everything well and will easily embarrass litre sportbikes on everything but long straights.
Don’t be afraid to adjust the suspension @MrsVisor there will be standard settings in the owners manual. It will have came from the factory set in road settings. There will be a comfort setting in there too.

It’s always interesting to hear what you think @Andyc1 as a very capable rider. It certainly doesn’t feel like a “beginner” bike by a long stretch (whereas the Suzukis I trained on did - not a bad thing), it feels like something that I am currently using to within 10 - 20% of it’s true capabilities probably!! I can’t wait to grow my skill enough to really use it as it should be.

Excellent review and it’s good to have the perspective of a newer rider. It’s just as valid as a write-up from somebody who’s spent years riding all sorts of bikes.

I think the Street Triple makes an excellent first big bike, it’s fairly compact, light and agile - all things that are good from a new riders perspective. But add in 120hp to the mix and it’s definitely a bike that you can grow into.

I think when you’re a new rider, your skills progress very quickly and there’s a danger that you’ll quickly out grow your first bike, but that definitely won’t happen with a Street Triple.

That @MrsVisor , is an absolutely excellent review and ‘documentary’ - objective; thoughtful and really well written.

When I married Mrs. P (better not say “the current Mrs. P.”, I suppose!) she really wasn’t interested in motorcycles at all but I think she quickly realised that they were such an absolute in my life it would probably be a very early full stop to our burgeoning relationship if she didn’t quickly find an interest and - hopefully - a mutual enjoyment in them. As a former traffic cop (advanced driving and close protection training included) she was very used to handling fast cars and so speed, per se, wasn’t a problem for her. What WAS a problem, though, was the diametric difference in the sensation of speed and the reality of the inherent dangers of not having that steel cage around her that comes with riding a motorcycle … and I’m still talking here of her being my pillion passenger! So, two things made her want to learn to ride -

So, luckily for both of us, she embraced the idea of getting her licence and getting a bike. Her first time out on a ‘school’ bike was a bit of a challenge for her - isn’t that the same for most of us? Still, she managed all the training, despite some sh!tty weather at times, and passed her test first time. Then, the Gods smiled on us both.

I’d always wanted her to get a Triumph, of course, and was thinking an early 865 Bonneville would suit but, by some almost inconceivable co-incidence, an old friend and former colleague of hers needed to sell her 2009 Street Triple 675 so the die was cast and a deal was done. I rode it home and enjoyed that “cloud-parting; eye-opening; awe inspiring, voice-of-God in Revelations” moment (or three) when I got that visceral tingle from the ST’s induction howl when the tach. needle quickly hit its first five figure reading. It needs to be remembered that I’m very used to quick bikes; I’m very used to triples and I’m fairly well used to machines that handle well, but most of those experiences had been aboard T300 triples (Trident; Speed Triples, etc.) so the Street was a wholly different kettle of fish! Or should that be ‘box of frogs’? Because it does seem a bit crazy, at times, that something that small and quirky could have SO much ‘character’ and capability on tap should you desire to explore its … ermmmmm … charms.

Naturally, it wasn’t long before I was looking for my own as I was beginning to get some resentment for the frequency of me needing to ‘borrow’ her bike when mine were freely available!! I’m rambling now, I know – my apologies.

But, one thing I did want to put in here is that my wife did a fantastic one-day event at Thruxton circuit run by an IAM group and for women riders only. It wasn’t a track day; didn’t involve leaving your brain at the entrance gate and wasn’t meant to, necessarily, get you ‘hanging off’ or pulling wheelies but it was meant to improve your confidence, explore your personal capabilities and, perhaps, give you a better understanding of what YOU as a rider might be capable of in a range of slow and ‘fast’ settings both on and off the track. Men were allowed but only as partners/observers/spectators.

It certainly gave Mrs. P a lot of confidence and pleasure and I’m sure she’d recommend it, regardless of your level of riding experience. As a sort of bonus Maria Costello was out on track doing some practicing - but only when nobody else was out!! You can imagine why …

Once again - thanks for a really great piece on the ST - probably Triumph’s ‘best kept secret’!

I’ve had my 675 for 8 years. While I’d like to ‘upgrade’ to another naked bike I don’t have any desire to get rid of the old Triple. It’s just so much fun to ride.

It’s very interesting to hear about Mrs P’s experience. It mirrors the one @Motopulcino had when she passed her test and ‘borrowed’ my 675 for her first year on a big bike. We were talking about track days just yesterday as a way to learn more about both rider and motorcycle performance in a safe environment. That one you mentioned at the Thruxton circuit (where else) sounds ideal. Being on a track for the first time can be a bit daunting. Expert advice and reassurance that it’s not going to be a manic session should remove much of the trepidation.

@AdieP and @Octoberon Helmut and I have been talking about me doing just that sort of track day too, for the same reasons. I also like the idea of one of the “guaranteed knee down” skills days - again to learn better bike handling and confidence.

Mrs Visor, might I suggest you take your bike to a suspension engineer who will set your bike up perfectly for your weight. It will cost about£50 and should be worth every penny. The difference it can make can be like night and day.

The above link is where I took one of my bikes. Obviously too far away from you.

Do you have any recommendations, Andy? I’d like my MV looked at.

Oh, yes - I forgot to mention the suspension issue! Idiot.

When my wife did the IAM women’s only day at Thruxton they had a guy there who was adjusting suspension for a nominal fee - can’t remember how much but something like £25 per bike … but don’t quote me on that! He was, fundamentally, setting sag/preload or making any setting adjustments available on the machine. I had both of our Street Triples (both standard models) done and the difference was night and day - it took away all of that “thrown out of the saddle on any bump” reaction, especially on my bike, and made the bike a completely different, and infinitely better, machine to ride. If you’re definitely going to do that IAM thing (I have a feeling it was something like ‘Solent area IAM Group’ - if I find any specific details I’ll post them later) it might be worth checking to see if the same people will be there.

That said, I’d wholeheartedly agree that getting the bike set up at a specialist is well worth the investment - it will provide the opportunity to increase the pleasure of riding and, surprisingly, probably improve your skills as the bike will be SO much easier to ride.