Assuming this might be of some interest to at least two others, I thought I’d write this down before I forget.

The problem was that my Thunderbird 900’s instrument lights were virtually impossible to see in sunshine. It’s a known problem, as ‘everybody’ who owns one will confirm. The wedge bulbs from that era are simply not bright enough to shine through the multicoloured plastic that covers them, not in broad daylight. And if you find stronger ones, they will melt the plastic. It’s particularly annoying for the Neutral light, in fact I found it at times a bit dangerous in stop-and-go city traffic that I had to remember to feel with the clutch whether the bike was in neutral or not. In sunshine I couldn’t see the L/R indicator lights either, dangerous and embarrassing.

Enter modern LEDs. Even if I found the job fiddly it’s absolutely doable and doesn’t require any special tools. I didn’t take many photos, but this shows at least some of what is going on: 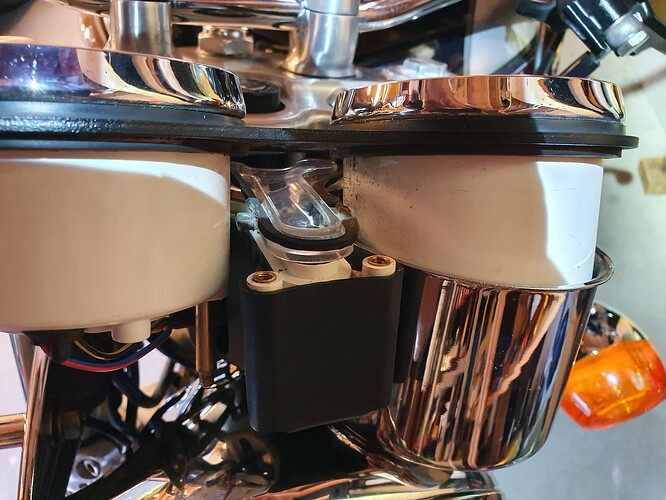 The white box is the bulb holder. Perhaps the greatest challenge to get to this stage is to not rip the soft rubber gasket under the clear display glass. It is old and squeezed and really should be replaced but is unavailable new.

This diagram snatched from The World of Triumph’s website shows the layout:

The next challenge, at least for me, was to get the old wedge bulbs out without breaking them. They had been sitting for around 25 years and corrosion was a possibility. The World of Triumph diagram suggests that the lamp holders can be pulled out from the rear together with the loom, and I contemplated trying that. Because I’m a pessimist I feared breaking the possibly brittle white plastic housing, so I decided to pull the bulbs from the top and not touch anything else. As the bulbs are sitting in individual cells there are not much room, and using tweezers would easily mean breaking them. Having remains left in the recessed holders did not seem tempting.

What I did, was that I found a piece of heat shrink tubing that fitted the bulbs loosely, heated it until it fitted perfectly, and wiggled until I could pull out tubing with bulb. I did need to use tweezers for a couple of them, and then the tubing acted as a good reinforcement.

I used a larger tubing for installing the LEDs loosely, put some cloth on top as a cushion and pressed them in place. Success!

Before, note (if possible) that neutral light and left indicator is on: 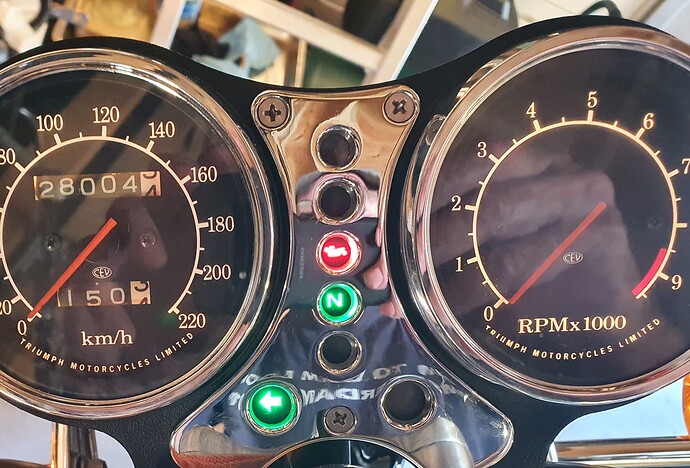 A couple of notes:

The old lamps were all white. I chose coloured LEDs even if I kept the multicoloured plastic overlay. This worked perfectly.

Some says that the blue LED (long beam) is too bright at night and recommends keeping the original bulb. I don’t find this a problem, but then I don’t ride much at night.

I’m certainly not an expert, but as I understand it (some) LEDs can apparently blow fuses if installed with reverse polarity, and that care should be taken. I completely forgot when installing. Either I was lucky with each one, or my LEDs/fuses don’t care about polarity.

I ended up not doing the bulbs in the clocks (yet). I kind of like the warm old-style bulb light, and find them bright enough as they are.

As I had to import mine I got them from the place recommended on a US forum, superbrightleds.com . I’d be surprised if you can’t find them in the UK, but I can’t help there.

At the time it was 43 USD with shipping, and this is what I got:

Lots of disclaimers etc. but this worked for me. Oh, and you may want to have a look here, from the owner’s manual: 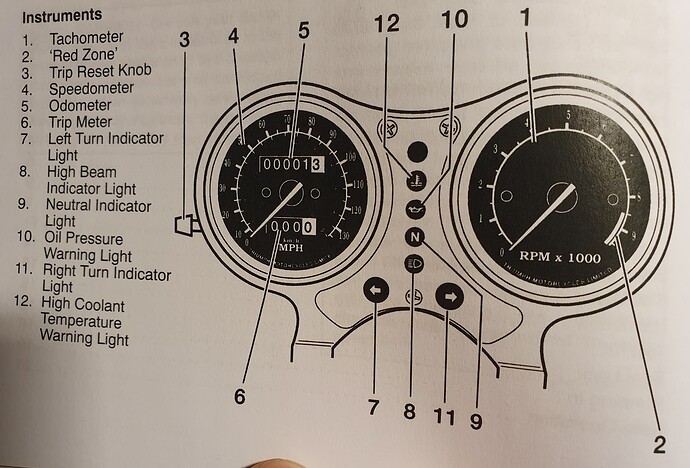 Nice one @Erling ! I might try that on my TBS - it certainly needs the upgrade.