There’s a big review of the new Triumph Tiger 1200 vs the dominant BMW R1250GS the July issue of Bike magazine. But which bike wins…? 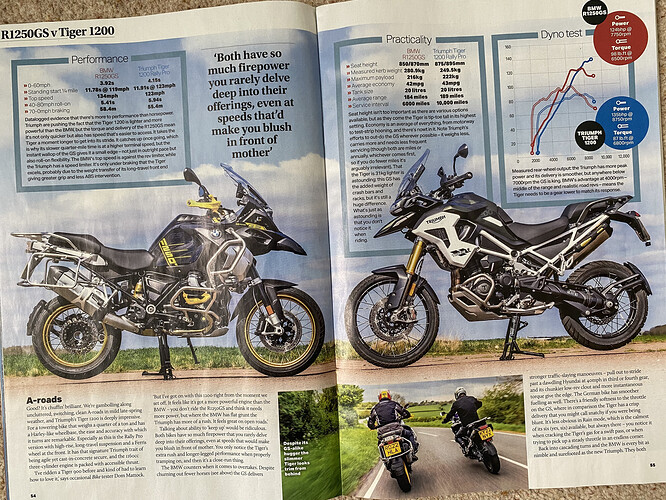 It’s a strange test TBH. The GS has spoked wheels, plus the scaffolding and full engine bars, none of which is standard and adds loads of extra weight - a standard GS TE is circa 249KG vs 240 for a Tiger GT pro and both have 19" front wheels so would be targeted at the same rider where as the Rallye above has a 21" front wheel so would be more in Africa Twin country than GS territory. They’re right about the torque though, it’s far more important for day to day riding than out and out horsepower especially on ADV bikes. BUT…at the end of the day it’s what the individual rider prefers and test rides are the way to go to help prospective owners choose what’s best for them. As TMF says there arn’t any bad bikes out there anymore…

This is so true today. In most cases it just comes down to the badge on the bike for people.