Hi there all,
Just spotted a new tom-tom app in development on app store.
Made for motorbikes apparently.
Couple of pics below: 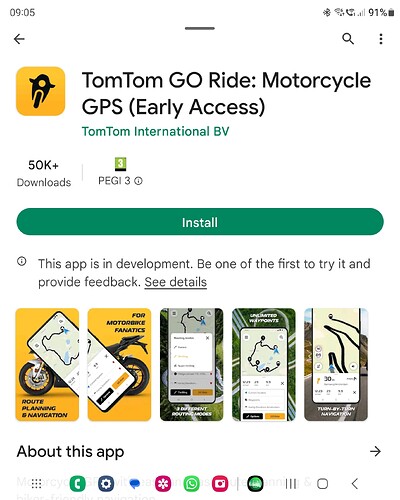 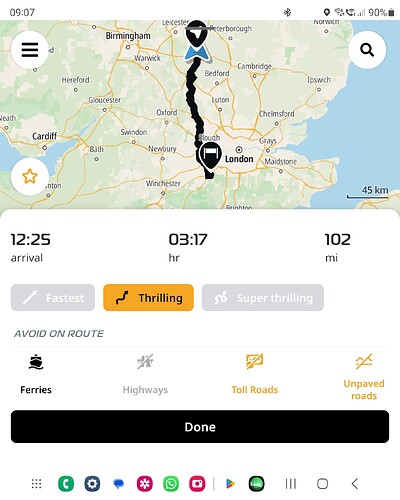 I downloaded this a while ago but haven’t really tried it. It seems okay and appears to include live traffic info.

Cool, thanks for sharing.

I will give that a go instead of the usual faffing about between the TomTom Go and MyDrive apps. I don’t see a map sharing option but hey, it’s free so can’t complain!

Had my first proper test of this this morning. A 50 mile round trip.

On the plus side…
It’s free (currently).

You can select the type of route - Fastest, Thrilling, Super thrilling. You can also tell it to exclude Ferries, motorways, toll roads and unpaved roads (select whatever you want to exclude)

It has live traffic and incidents displayed (like Google maps). This is the first nav app that I’ve seen with this.

It’s dead easy to set your destination just using the map and pressing on a location. It also seems to have limitless waypoints which can also be selected by just pressing on the map.

If you go off route it recalculates very quickly.

The display is very clear and easy to follow (although I did know where I was going which always makes it easy). It displays all the usual data about time and distance plus your speed and the speed limit.

On the negative side…
It doesn’t appear to have off-line maps so if you don’t have a phone signal I assume it will stop working.

If you miss a waypoint out it will always try and navigate you back to it. Annoying when the road you were planning on using is closed!

I don’t know how often its database is updated, but several times I found its speed limits displayed to be wrong.

Conclusion…
Overall I would give it a thumbs up

I particularly liked the live traffic feature and the ease of use. I’ll definitely use it again and if it had the facility to download off-line maps then it would probably be my go-to choice of the various apps I’ve tried.

If they start charging for it then they’re going to have to add the off-line maps and fix the out of date speed limits to tempt me.

If you miss a waypoint out it will always try and navigate you back to it. Annoying when the road you were planning on using is closed!

They’ll probably be a ‘skip next waypoint’ option (there is on my dedicated satnav). Don’t know how easily accessible that is on the app, for my satnav you can reorganise menus and I have that on the first menu screen for easy access.

I don’t know how often its database is updated, but several times I found its speed limits displayed to be wrong.

Yeh, my Tomtom satnav is always out of date with speed limits, though you can understand that being as you come across a new speed restriction virtually monthly

Edit: That’s not to say there aren’t also a few errors on the mapping, e.g. missing end of speed restrictions so when leaving a 30 or 50 zone for national speed limit it thinks the limit is still valid. And there’s at least two junctions on my usual routes where it thinks you have to turn left, when in fact there are no such restrictions. (Which can mess up your route navigation when it wants to send you one mile the wrong direction to turn around and come back)

Yes I could have gone into the route and deleted that waypoint but that would have meant stopping the bike as it’s not something I would want to try and do while riding.

To be fair to TomTom though, it’s probably not unreasonable, just a lot more hassle to do this type of thing on a bike than it is in a car.