Is it better than a GS? “Probably…” 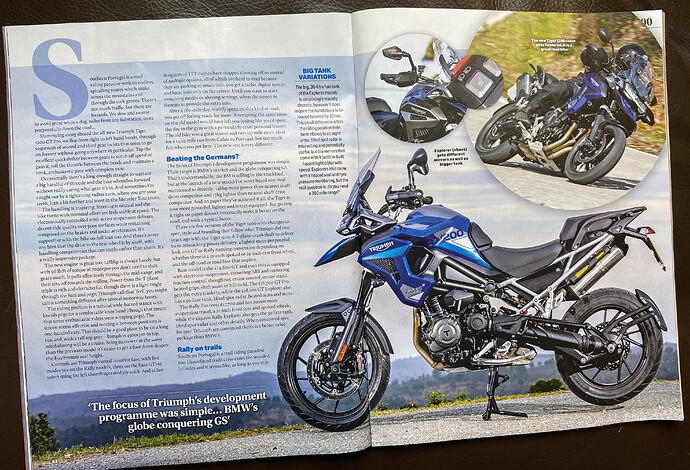 I’m sure it is a great bike. I just wish they would make them accessible to us vertically challenged folk.

That’s a complaint I hear a lot from Rachel as well. You may well be able to get them lowered.

Triumph can’t compete with BMW. Over here in Europe most bikes you see are BMW. They tried it with the big heavy Trophy 1200 and stopped making them after a few short years after selling very few of them. The new Triumph may be a good bike, but I doubt it will sell many.

I don’t anyone can compete with BMW. The GS sells in incredible numbers all over Europe, and the UK, it seems. I reckon they’ll do well with the new Tiger it’s unlikely to challenge BMW’s dominance.

The Trophy 1215 SE was and still is great bike. I had one from new for three years. It was as good if not better than my mates GS, but it could not compete with the BWM marketing machine and cult following. I think you are correct about any Triumph that goes head to head with BMW.

I had one too Steve, for a couple of years. It had every conceivable toy on it and was super comfy, but I eventually had to get rid as it was just too heavy for me. Mid size bikes are my limit these days

Agreed on the weight of the bike. This was a factor when I moved mine on.

I think a lot of BMW’s dominance is down to herd mentally. And of course those 2 that done that tv program.

I agree. BMW have the brand and ‘hey, everyone else has one so they must be good, right?’

I bet KTM are kicking themselves for denying Ewan and Charlie a couple of bikes.

A bit like Shaq’s chance to invest in Starbucks (turned it down because Black people don’t drink coffee).

No doubt they are a fantastic bike. But there are many other fantastic bikes out there. KTM would be my choice if I was in that market.

I was in that market and bought a Multistrada.

I took one (BMW) for a test ride about 10 years ago and was decidedly unimpressed. It did everything ok but the ride was very bland and at no stage did it make me smile, didn’t help that the test bike was in proper shoddy condition and the staff couldn’t have been less interested.
Then went to Ducati and tried the Diavel which was great but I couldn’t get my head round whether it was supposed to be a sports style bike or a cruiser, when I returned the salesman said “I know you didn’t book it but now you’ve come back take this out for a spin” and handed me the Multistrada S. Came back with a great big grin on my fizzog just couldn’t justify the price tag it came with

Someone at Bike magazine must be listening…

The BMW GS is to adventure bikes what the Porsche 911 is to sports cars. It’s very hard for competitors to get much of a look in, no matter how good they are.

That’s 'cause you’re a nutter

They have customer service that the others can’t or don’t want to match so makes the overall package hard to beat. Their used bikes under 5 years old from a stealer come with a 2 year warranty and many buy new on a PCP so come to the end of the 3 year factory warranty many just flip their old bike for a new one as the trade in residuals are always good on the GS at a main stealer. It’s a bit like Hotel California