It really is a sign of how life and priorities change when when chop in a 2 seater convertible for a van.

It’s quite a nice one though 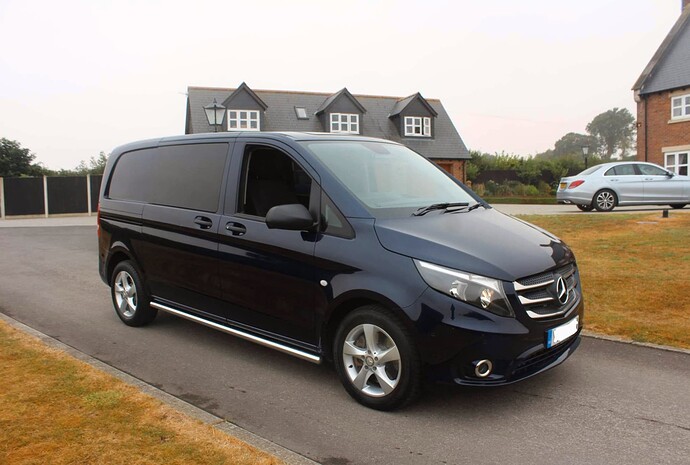 I’d take a van over a hairdresser car every day of the week. Good work

And particularly reason for the change @geoffb ?

I have had Audi TT convertibles for 22 years now and always as a second “fun” car but for the last 2 years it has just become a commuter to and from work (when not riding the bike) and otherwise unused.

We plan to buy a small hybrid car as well and decided that a van would be a good practical all-rounder option. It will be a major change from the TT but this Mercedes Vito is comfortable and drives like a car.

As a bonus, I can chuck my LC in the back for events.

I’ve had all sorts of cars over the years, sporty and otherwise, but only have vans now. They are just so useful, and modern ones drive just like cars anyway.

I know this is a fairly old and dormant thread but I’ve just returned from a (great!) holiday in Scotland and so forum activity has been a bit non existant or haphazard for me for the last couple of weeks.

On the subject of vans - my wife decided earlier this year that she quite fancied the idea of a camper van. Over the last two years we’ve had 2 long distance trail walking holidays in Scotland … well, 3 now … and mused on the idea of doing the walks from a ‘self contained base’ rather than use the car and B&B’s; hotels, etc. The informal chats quickly turned to occasional “oooohh, look … a second hand camper/conversion for sale” and then became a slightly more serious search as time and the discussion lead us both to see the potential advantages outweighing the likely disadvantages/downsides/costs, etc. We travelled to see a couple of camper vans; looked at a number of options; considered a DIY conversion solution and then, by chance, saw an autotrader ad. for a newly completed conversion in South Wales.

Long story short (ish), the conversion was done by an individual who was making his living from doing this as a “when I feel like it or need some money” type business. We spoke to him and arranged to go up and see the camper … actually, I THINK they’re more commonly known as “day van campers”.

The van is a Vauxhall Vivaro Mk I LWB; lined and fitted with the (inevitable) ‘rock and roll’ bed, though, unusually, this slides outwards and across lengthways from the off side as opposed to a front to back orientation; sink; gas cooker (two hobs); and t.v.! It was very clean and tidily done with a nice grey finish to all the formica/chipboard units. Best of all, though, the van had a mere 67k miles on it! According to the seller his supplier is a broker who sells off ex-British Gas Board vans and they are usually low mileage because they tend to be driven out to jobs by fitters/engineers et. al., then parked outside the work location for the day before being driven back to base. They are, obviously, fully serviced though the service history is, apparently, kept on-line and we never did manage to get access to it. Nevertheless the engine is quiet - for a van diesel … no, not VIN DIESEL, silly - and is, with a six speed box, (now) quite economical. I say “now” because, as purchased, the van was initially electronically speed limited to 70mph and its acceleration was, at best, rather pedestrian! It needed a brutally heavy right foot for A road overtakes and it was a complete PITA on a motorway as you’d end up in lane 2 closing on some numpty doing 65 mph., pull out to overtake and then take an age and a day to crawl past at 68 …69 … 70 … 69 … 68 … etc. Not fun.

We did some online searching and phoning around and found somebody local - ish who could travel to us and do a de-limiter and ECU remap exercise and it has utterly transformed the vehicle! It accelerates much more rapidly - obviously - but also cruises at 70-75 more comfortably, quietly and economically than it did before. The cost was reasonable (£200 ish) and will be recouped in a matter of a few journeys.

As mentioned, we’ve just returned from Scotland (Buckie - the terminus of the Speyside Way) to home via an overnight stop at Tebay a total of 620 miles on around 3/4 of a tank of fuel. Granted, more than half of that was on motorways and at around 70 mph being driven for economy rather than outright progress but it’s still an impressive performance AND it was comfortable, relatively quiet and no more tiring than driving a car. I did all of the driving and, to be honest, I could probably have driven the 600+ miles in one hit but, unfortunately - or otherwise - neither the wife nor the dog would have been at all impressed.

The REALLY great thing about the camper is that we’re learning to enjoy ‘van life’. Granted, the “Mighty Vivaro” will NEVER have the alleged ‘cool’ of the VW Tn series, but it is all the better for it as far as we’re concerned - far too many of those around, anyway! We’re finding out where we can park for the night at no cost; hoping to do some of the long distance walks in England and Wales using the van as transport AND accommodation; and my wife (who actually bought the van) is probably going to sell her car and use the van as her ‘daily’ transport since, for the most part, she works from home.

The only downside is that I can’t get a motorcycle in it and would have to tow one if we were ever to consider having both bike and van on the same trip. I could, I guess, ride the bike while the wife drives the van but that would demand guaranteed dry weather and that’s a rare event in the UK.

Yep, I can recommend van useage and agree that they really are more like cars to drive than they were in the days of, say, the Mark 1 TRANNY!

BTW, @geoffb I do delivery drives for a Merc. dealer so if you don’t have nice MB key rings to go with your nice new van, let me know and I’ll pop a couple in the post,. They’re nothing too special but they’re leather, MB specific and better than, say, a used car dealer’s fob!

We need pictures of said van!

It would be really interesting to see how it’s fitted out etc….

About three years ago we bought Betty (Black Betty bambalam) did 5 or 6 weekends in her which were fantastic. Fully fitted out, kitchen, double bed, two tv’s, Electric Blinds, hot water. Its the 2.5 litre V6 auto so no slouch, we’ve since added a 4 berth double drive-off awning but not had chance to try it out due to covid and moving house etc, can’t wait to do some more trips 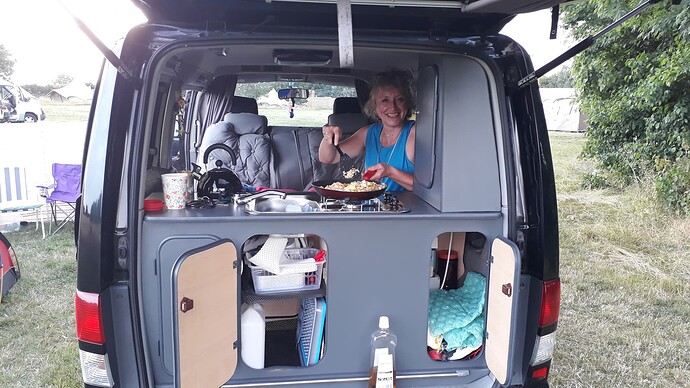 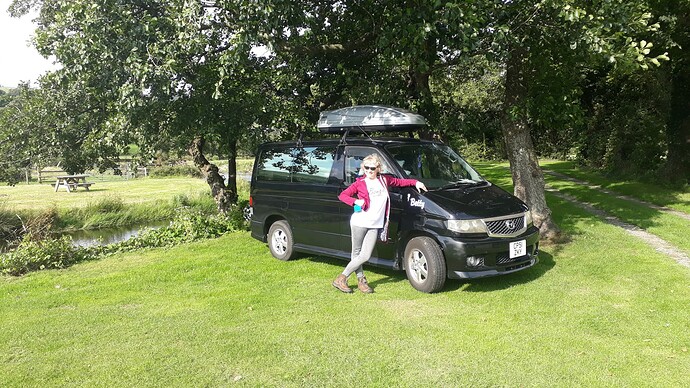 I think that the Vivaro (aka Renault Trafic) is a good choice, Adie. Old vans tend to die of rust long before their diesel engines wear out. I’m not in the market for a campervan, but I chose my Vivaro van partly because I’ve never seen a rusty one, unlike, say, Sprinters and Transits. If buying a campervan, I would certainly look carefully at the base van’s rusting habits.

Had a van for years, he just died last year (second engine used to death). I sent it to rust heaven. We decided no one else will drive our van.
I miss my van.
We thought about chasing another one (a Vito like yours), but changed our mind.
We are now more on a pickup (Hilux or similar) with hardtop and the roof tent. 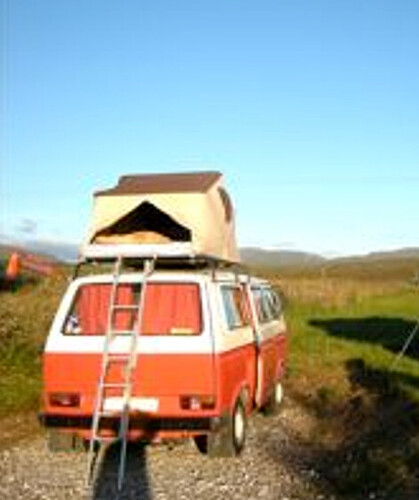 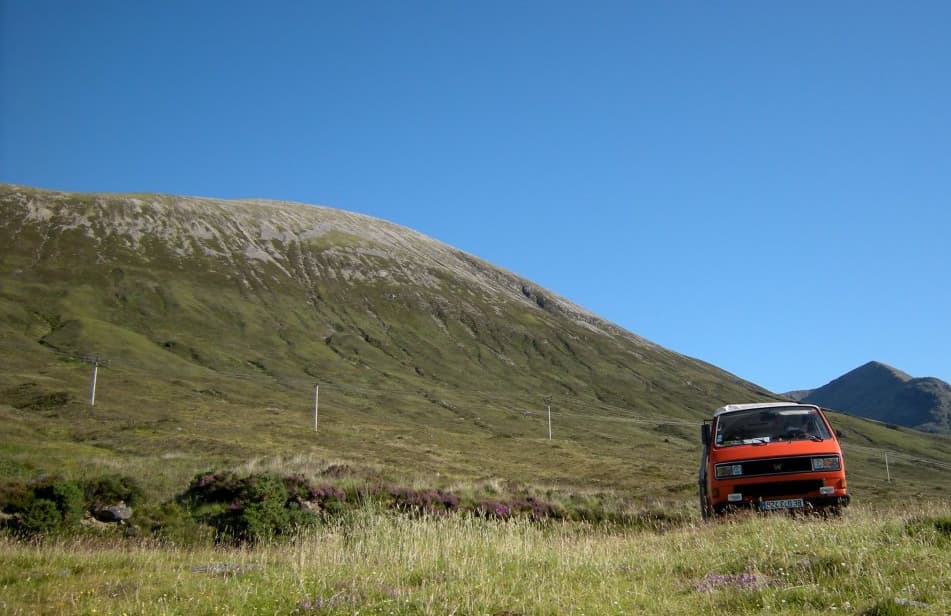 @NealH - pictures will be forthcoming when available. I’ll try to upload some of the van in its newfound natural habitat in the wilds of Bonnie Scortland!

@PatW - that (BONGO?) looks good - even narrower than the Vivaro - and the interior trim looks exactly like the material used in ours … right down to those pop-in/out handles on the cupboard doors! The catch plates for those things are a nightmare. Must be ‘CC de rigeur’!

I’ve also procured - but not yet tried out - a large drive-away awning but that’s unlikely to be trialled this year. It’s, obviously, only going to be of use if we’re pitched up somewhere for a few days and our current useage is to support/enjoy the the completion of long distance walking trails so it’s a one night and move on type of thing.

@Dave49 the Vivaro/Trafic does indeed seem to be a really robust machine and, as you say, is rarely seen with a rusted out chassis or body. Best of all, though, the ergonomics whilst never actually ‘car-like’ are very comfortable and practical. The windshield is huge and gives exceptional visibilty; it’s not ever going to handle like a car but it doesn’t exactly roll like a battleship in a heavy swell either, and at motorway cruising speeds it is entirely practical to hold a normal conversation.

@Hubaxe - sorry for your loss! Well, sort of! I can well understand how you would be missing it, though - clearly well used and much enjoyed. Hope the Hilux gives a similar amount of leisure and pleasure!

BTW, anyone got a lead on a set of Vivaro Sport alloys, by any remote chance?

I put some roof rails on the Vito today and then it pissed down with rain when I was planning to clean the bikes!

Torrential here this afternoon. Power outages all over town. Drove back past the reservoir…still scarily empty. 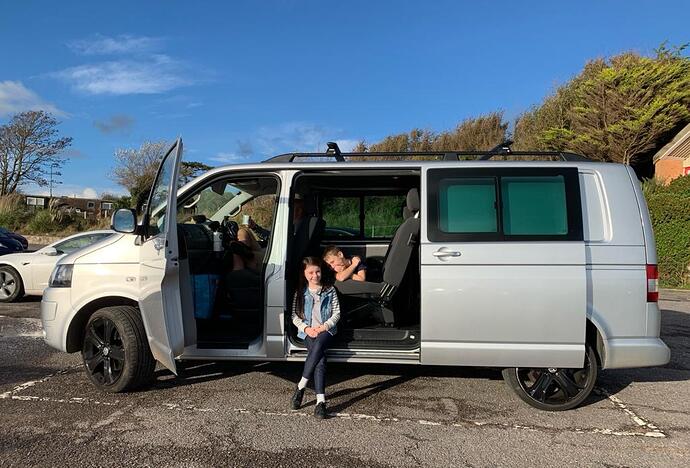 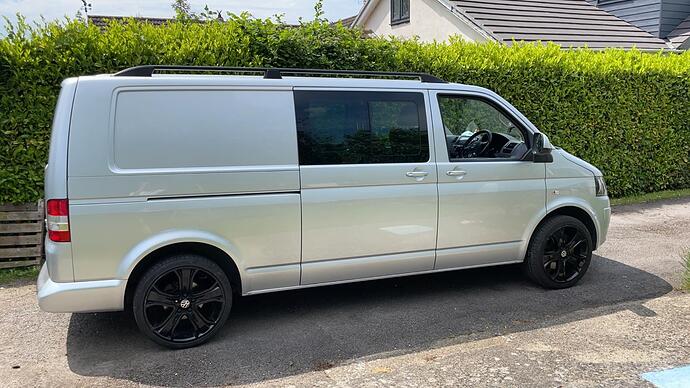 Power outages where you live ???
I assume you mean all your candles blew out ?

It was in the Big Town near my house. Had to sit in the bar with candles drinking my pint.