Ok, most of us have alighted upon social drugs at one time or another… booze, fags, weed etc. But I’d quite like a discussion about gambling… if that’s ok dudes n’ dudettes?

I’ve never been a horses or dogs man… I’ve dropped a couple of quid here and there on international team sports occasionally… but otherwise, my method of handing over my “hard-earned” to people I don’t know, is (apart from UKGov) usually the lottery, and occasionally dips into Euromills… ok, I know the odds are Rockin’orse Pooh… but, you know, JIC!!!
However, there seems to be a wealth of “giveaway” sites at the moment…tapping in on the “if only!” Psych… Giveaway Guys, BOTB, Aspire… to name a few. Now, I know a few people who have won a few quid on Lotto (no big winners though)… does anyone know anyone to win a “Giveaway “ site draw?

Guy in work won a mint 80’s Toyota ‘twin cam’ on one of those sites… jammy bugger!

I have bought cheap tickets about five times for small prizes on Apex66 out of curiosity. I have won a Beeline Moto for £2.50 (first time I entered) and a helmet (for I think £4.50, which didn’t fit so was sold on eBay for around £280 - worth £450 so still a bargain for the purchaser). I have never won anything before ever so it was a surprise although I haven’t exactly hit the big time

A friend of mine and @HelmutVisor has won a few good prizes from RevComps, including a fully - accessorised BMW GS (took the cash equivalent).

I won a brand new, still in the box, Weber bbq in the church tombola back in September ( just when you need a new bbq ) ….does that count?
Loads of other prizes but Mrs O says to take the bbq. It’s still sat in the box in the garage as we already have a perfectly good one outside.
But free gambling sites , nah.
Lotto occasionally.
Bet on the big golf competitions for a bit of fun , £10-15.00 stake.
Occasionally visit a casino if we are on a cruise for a few dollars flutter but as a rule it’s a few quid here and there, I worked too hard to throw it at bookmakers and such like.

does anyone know anyone to win a “Giveaway “ site draw?

I know someone who spent just over a quid on a ticket and won a new motorcycle, they had done a small number of such lotteries before. Bike was supplied by dealer offloading previous years model.

Of course, such anecdotes don’t say anything about the odds of you winning, so I’ve just found the listing for that draw where it says the number of tickets they we selling, so in that case it was 18,000-to-1 odds.

That’s interesting… I got this from the U.K. lottery website… roughly equivalent odds to getting somewhere between a tier 3 or 4 prize… (this week- £140 to £1750) 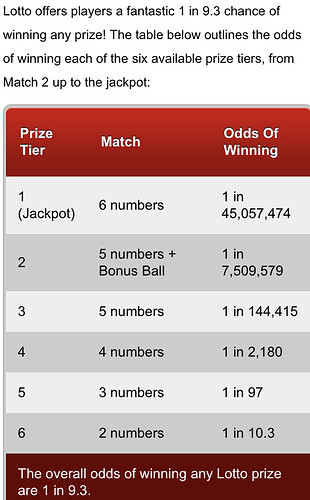 I won £15 on a channel ferry crossing on school trip in my fifth year on a slot machine.
I also won it again on the way back!
I didn’t tell the teacher as i’d have been in trouble…

The National Lottery really winds me up. Yes, there are people who will buy a ticket for a bit of fun, but I think it largely preys on the desperate.

Being government backed and for ‘good causes’ just legitimises gambling. At first I viewed it as a tax on the stupid, but realised that was harsh, it’s more a tax on the desperate.

I did a bit of betting on the horses back in the day. Mainly as it was my granddads passion. By my twenties I lost interest and have not bothered with any form of gambling ever since. I do occasionally buy a lotto ticket, but I don’t really consider that as gambling.

PS. My main vice today is my bikes.

Postcode lottery, that’s it, I never have got the gambling gene

I do occasionally buy a lotto ticket, but I don’t really consider that as gambling.

That literally is gambling, Steve.

But I get what you mean - I throw a few quid at the lottery and occasionally take a punt on RevComps. Haven’t won anything on the latter but I did get about £2k from the Lottery with a work syndicate a few years back.

Lucky you. We have had an odd £10 win or a lucky dip, but nothing substantial.

I got a (genuine) email the other day saying I’d won the Eiromillions lottery. Let’s just say I won’t be moving to Bermuda any time soon.

any time we had small wins it went on scratchcards ffs and whittled away to zero. Never done lottery since but I do occasionally dream about one of those 100+ million wins

I am not much of a gambler but I do the Lottery once in a blue moon and have tried BOTB a few times. I have never won anything significant but I do get the occasional £25 prize from NS&I Premium Bonds.

I did win £1k on the postcode lottery! Just remembered!
I had a gold letter as post, opened it and it was one of those things you see on tv.
Thought it was a wind up so I called the number on it. Yes, it was actually a genuine one and 3 days later, money in the bank!

Premium Bonds is not really a gamble as you can always get your stake back. More an investment I reckon and a great option in my opinion, if you’ve got a few quid spare.

I do get the occasional £25 prize from NS&I Premium Bonds.

I’ve had premium bonds since I was a weeny nipper and never won a bloody thing!

Neither have I, but we bought some for our son and he’s had a couple of wins… jammy sod!!!

I’ve never placed a bet in my life. Not surprisingly, I’ve never won anything.