Thanks to Covid-19, last week for the first holiday Rachel and I have had in over two years. Our trip to Las Vegas was arranged almost a year ago. It’s been a long time coming, in other words. For part of our trip we wanted to grab a couple of bikes and head out of town, away from the Strip with it’s enormous hotels and feathered showgirls, leaving behind the crowds, the slot machines, and the roar of muscle cars tearing up the tarmac towards the next set of lights. When we flew in we watched the desert slip past a few thousand feet below. Now we were in the saddle and ready to see it close up.

Our original idea was to hire a couple of Harleys, because America, and enjoy them in their natural environment. An Uber ride later we were standing outside the city’s main dealer, which has a sign so big I would’ve had to take the photo from California to get it all in one shot. 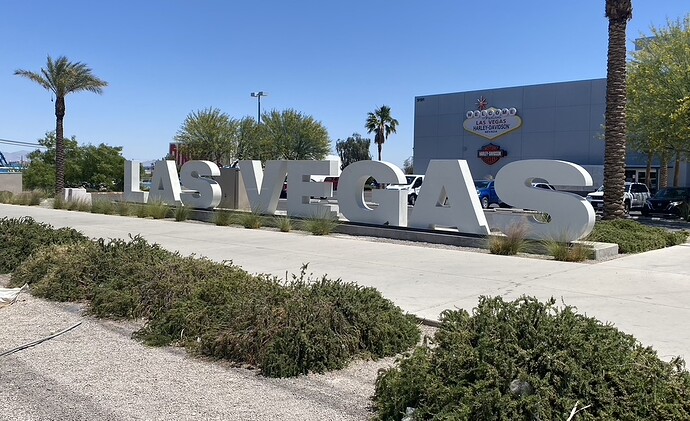 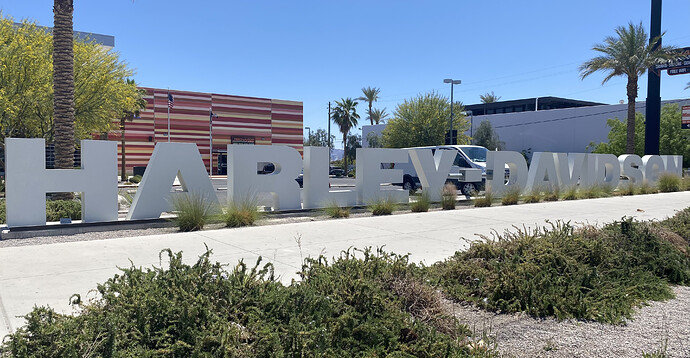 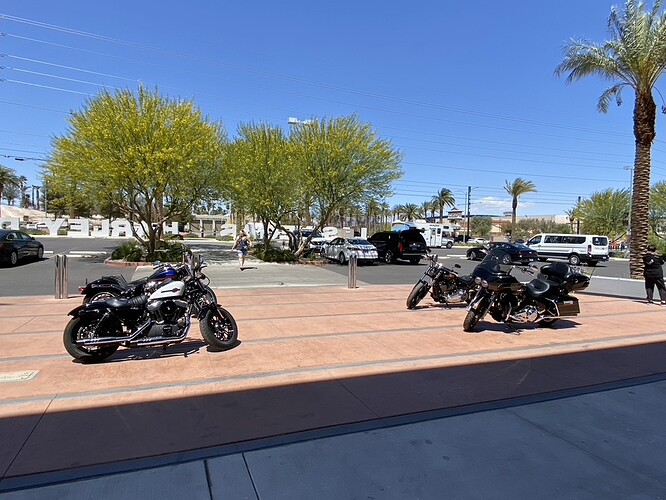 The showroom was, as you’d expect, not pushed for space. 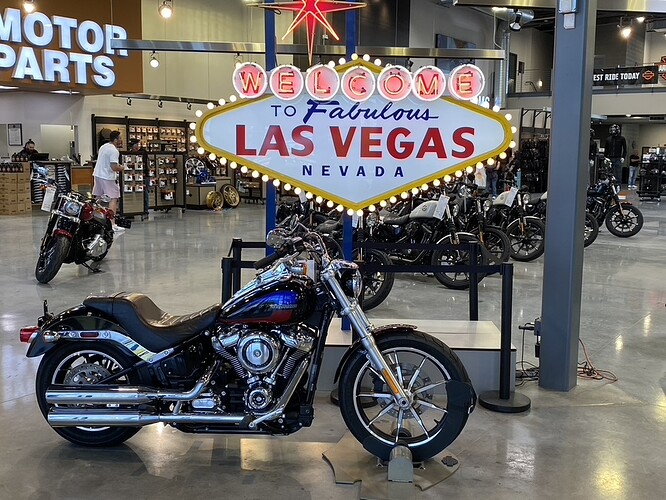 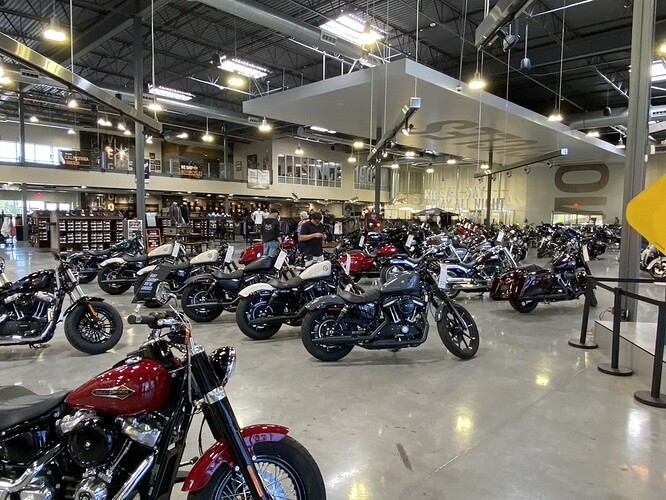 Unfortunately, they only had a couple of Glides available, and at quite a high prices. I was more interested in something a little less starshippy. Keith, the really helpful guy behind the rental desk, told us about a sister dealership at the other end of town that had more bikes available. Before we left, he also gave us a map and loads of advice on good rides. We owe Keith a beer. 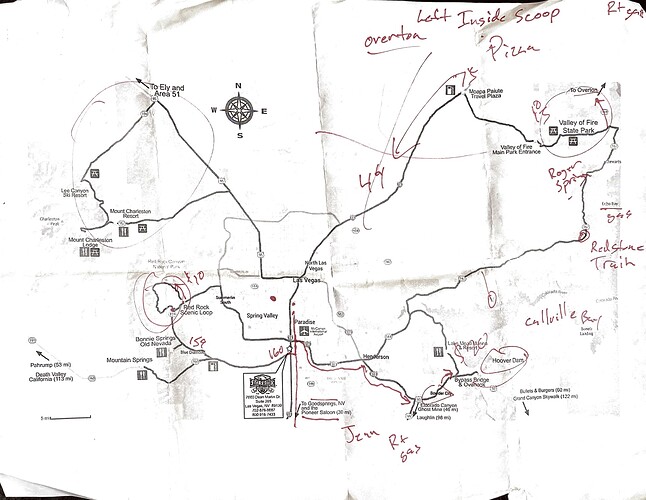 First though, we needed a couple of decent steeds. We left Harley, which is right next to the famous ‘Welcome’ sign complete with a couple of Elvis’s (not shown as they charge for photos - uh-huh). 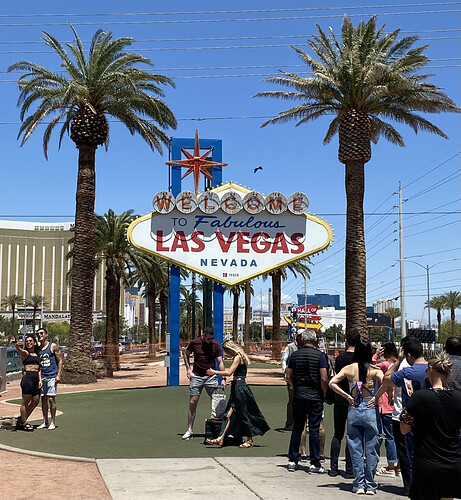 A small detour to the place next door was necessary… 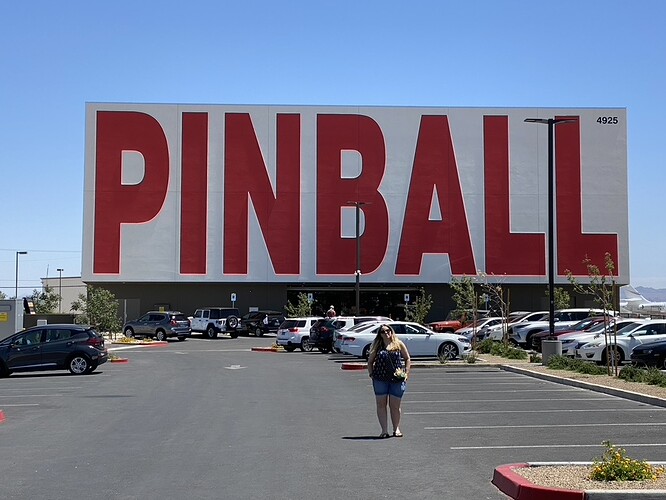 …then we climbed in to another Uber and headed back up the Boulevard, hung a left on Sahara Avenue and arrived at… 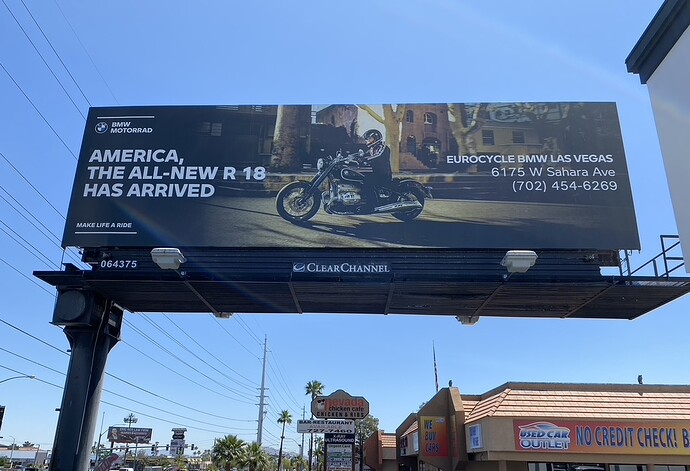 Inside it could almost be mistaken for a regular Triumph dealer in the UK. Only the Nevada plates and American accents give it away, although the sales manager is English. 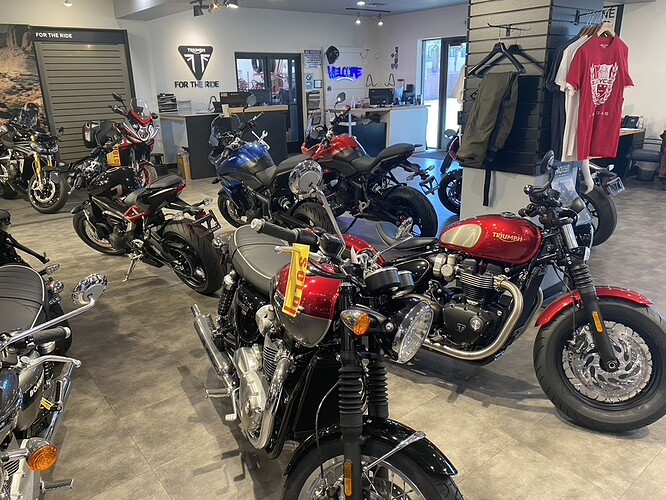 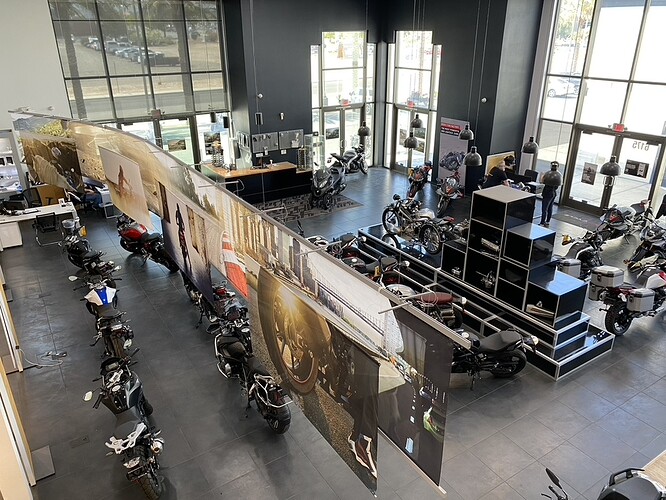 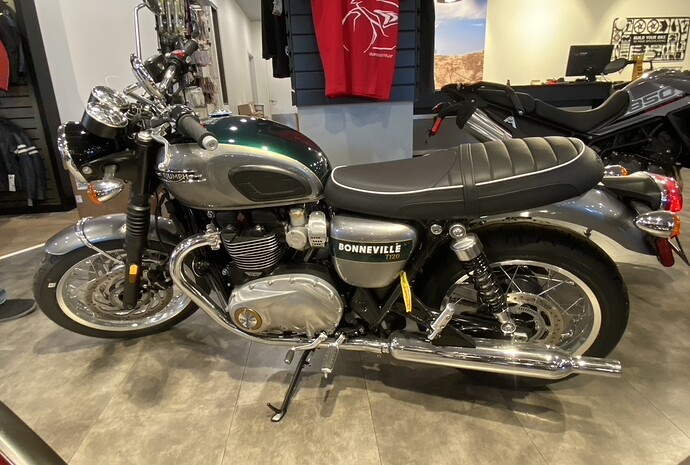 Not quite the Amercan dream machines we’d planned on then, but at least they had a few options for us. My second choice after a Harley was a Rocket 3 but they don’t have one to rent any more. Apparently people were chewing through tyres at an alarming rate, spinning them up with the traction control switched off. I still wanted a cruiser though, so it was with a smidge of disappointment but a heap of curiosity that we put the credit card down for two BMWs. 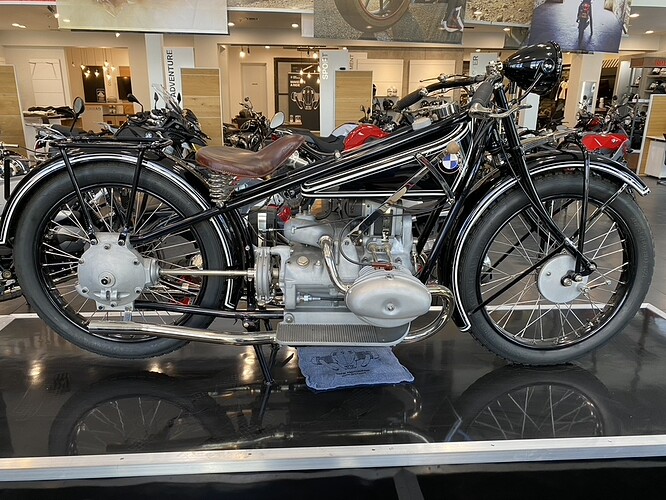 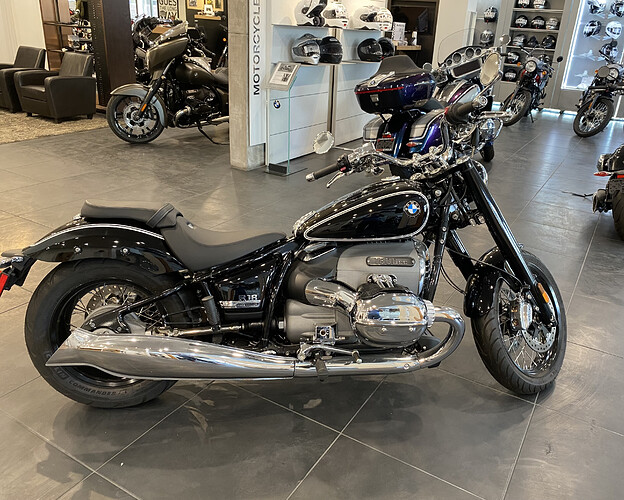 That’s the one I rode. Rachel had one with a screen and boards rather than footpegs. 1800 cubic centimetres of Teutonic torque to take on the desert highways. Nice.

We hired them for two days but only ended up going out for the first one. More on that later.
Our original plan was to ride out to the Hoover Dam and on to the Grand Canyon. With advice from Keith ringing n our ears, we didn’t attempt that in one day as the ‘good’ bit of the Canyon is a fair old ride.

The BMW is big and heavy. Not what I’m used to, though I did some miles on a Guzzi California years ago. Nimble is a word never used to describe the R18, and with good reason. It’s manoeverable in the same way a duck is a good sprinter. Sweeping lines and high gears are the order of the day. I think my favourite part is pushing the starter button and feeling the bike lurch as the enormous pistons begin their tango, sounding more like a car than a motorcycle.

American cities are, by and large, laid out in an easy-to-navigate grid pattern. So obviously we got lost almost immediately. My fault. I forgot to turn right at the first intersection. Muppet. And so to my first observation about riding the R18 - there’s no satnav. 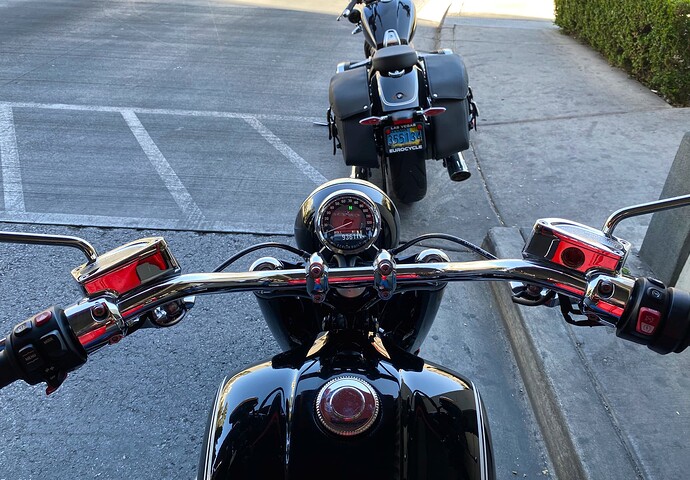 Eventually we worked out where we were (too far east) and got on the road out towards Henderson, past Boulder City, and on to Lake Mead. 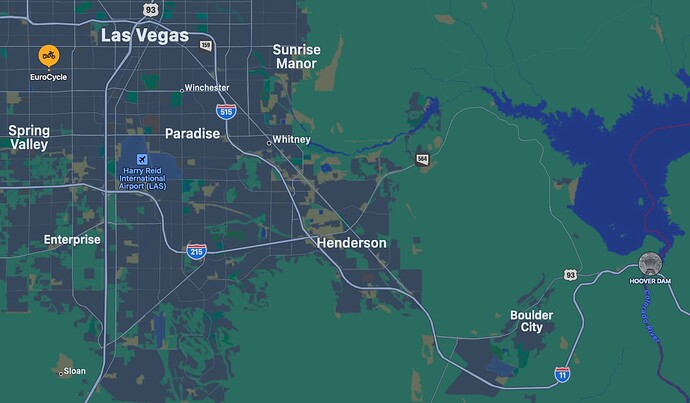 The bikes cruised steadily along the highway, grinding through the miles with ease. The trick to a smooth ride is get in to the higher gears quickly, using the grunt of the engine rather than revs that make it a bit lumpy, as Boxers tend to be. It’ll cruise happily at 40mph in 6th. The riding position was fairly comfortable for me but Rachel found the bars a stretch that became tiresome over the course of the day. My gripe was the seat. For a cruiser, it just isn’t comfortable. My Street Triple feels plush by comparison. I did a lot of shuffling to ease the aches along the way. I’ve also seen comments about the leg position. It’s true you get less than a 90 degree bend at the knee but I never found it to be a problem. If you’re over 5’10" though, and want your feet kicked out ahead, you might want to pass on the R18

The Hoover Dam is an unquestionably impressive structure, generating 4 billion kilowatt-hours of hydroelectric power per year, providing electricity to Nevada, Arizona and California since 1936. I didn’t know until I got there that the dam is built across the border between Nevada and Arizona. There are two clocks on it showing a different time at each end. 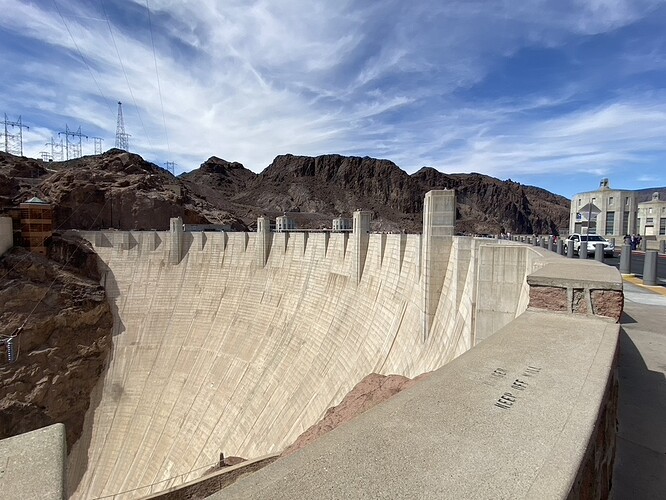 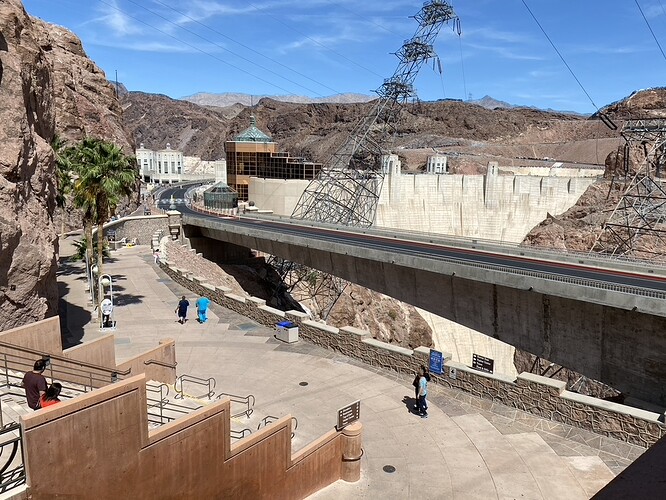 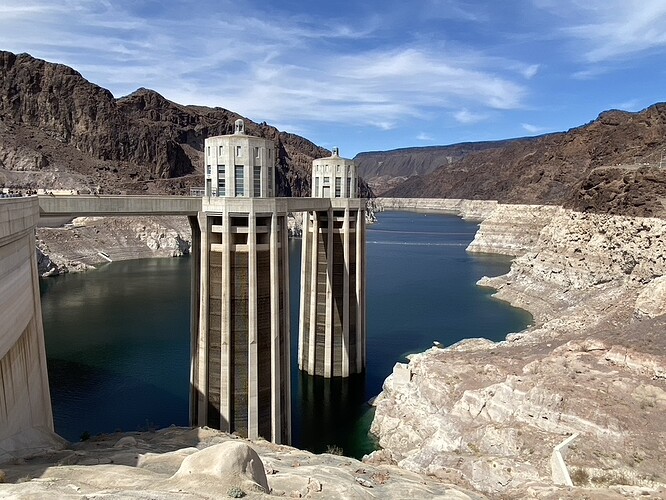 It’s clear to see from that last picture that the reservoir is far from full.

Time was moving on and we still wanted to ride up to Overton, a small community about 70 miles north, so we took off again through the Lake Mead National Rectreation Area. Driving through the park costs $18 per bike but it’s worth it.
Our destination in Overton was The Inside Scoop. A ‘mom and pop’ cafe and ice cream parlour, recommended by the aforementioned Keith. Once again he didn’t let us down. We commented on the size of the ice creams. The young lady serving us said, “The manager says to be generous.” I like it here. 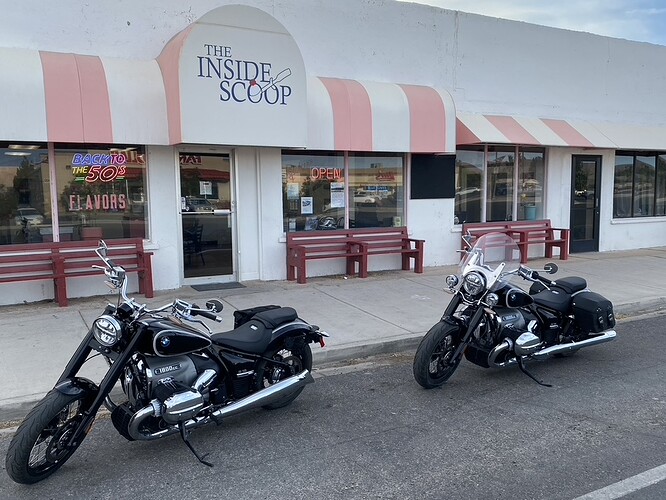 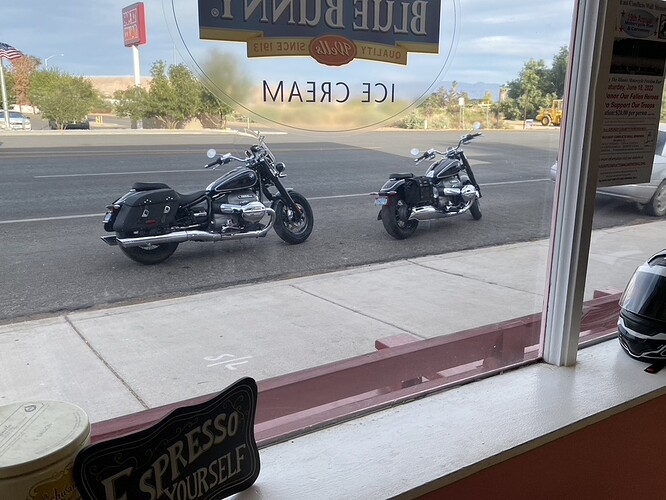 Now the day was really starting to run out and we still wanted to ride through the Valley of Fire State Park on the way home. A winding, sweeping highway runs through sandstone rocks stained shades of red by iron oxide, silica and manganese. It is quite spectacular. 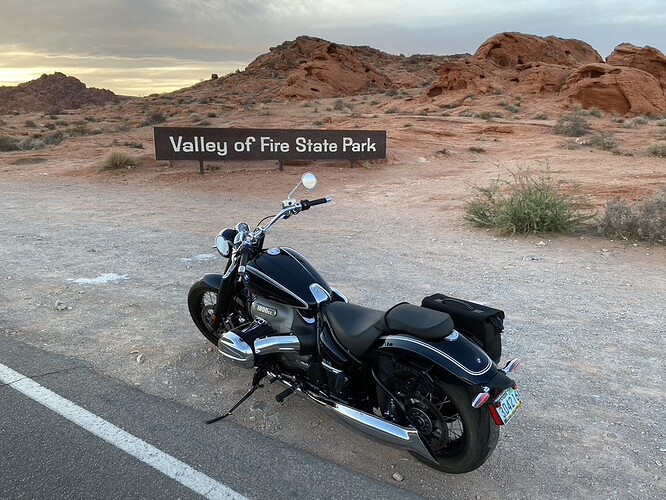 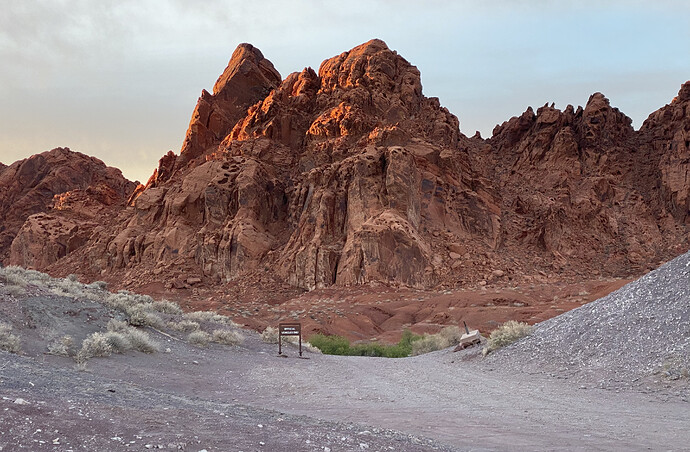 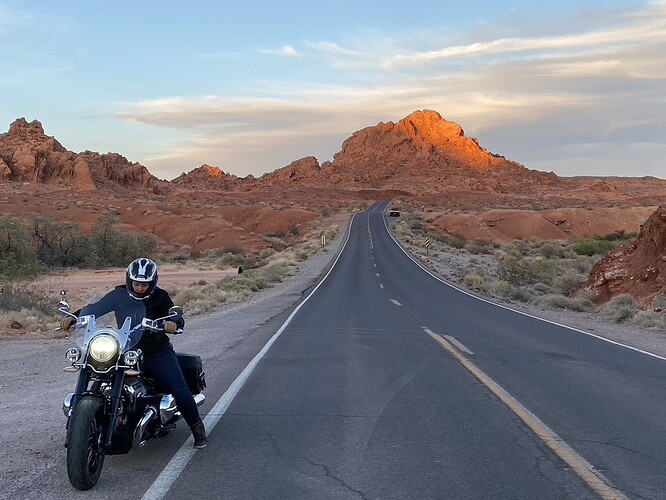 The toll booth was already closed when we got to the park. By the time we got out the other side and on to the Interstate to take us back to Vegas, darkness had descended. Tiredness and dry contact lenses made it a difficult return trip for Rachel and so it was gettng late by the time we arrived at the hotel car park. To add injury to insult, she then got clobbered by the barried coming down on her helmet as she rode past it. A medic checked her at the hotel and recommended a trip to the ER, just in case, as he neck was hurting a lot. Not quite the way we expected to end the day; walking out of the hospital with a $6000 bill! If you ever wonder about the value of the NHS, I recommend a quick trip to a US hospital. She’s ok, though. Just a bit of bruising and whiplash. And that’s why we didn’t ride out on the second day.

Now, back home again, we are going to grab a map of the US, stick virtual pins in all the places we’d like to go, and have lots of fun planning bike rides that join the dots together. I’m not sure when we’ll be back, or quite where we’ll go, but I’m looking forward to it already.

Fair to say a mixed bag of a holiday then! Glad Rachel is ok and able to laugh about the experience (eventually).
Some awesome scenery but the highlight of your write up for me was the sprinting duck​:rofl:

Excellent write up and glad all was ok in the end @Octoberon !
Lost wages is a place where we have always wanted to go out too so maybe in the future sometime.
Shocking bill btw and yes, nhs certainly has flaws but thankfully its there.

‘Lost wages’ is spot on.

Cheers, Dawsy. Yeah, a bit of an odd one all round, really.

Fantastic writeup and pics, thanks @Octoberon

P.S. Nice to see that this forum doesn’t have an obtrusive limit on post length or number of pictures

, unlike the other place where you have to split these things across multiple posts.

Shame about the bash on the head for Rachel, but glad all is okay. Can you make a claim on travel insurance for hospital bill?

I think LV should be on everyones to-do list?

She’s checking the insurance situation this week. She did have cover but you know how the small print is.

What an amazing experience; great write up and cracking photos (and everyone needs a Keith I think!!).

I am sorry about Rachel’s crack on the head and very much hope that insurance pays out for the hospital bill, it’s not the sort of souvenir you need.

Sounds like a fun day of riding, Octoberon! That is until Rachel getting bashed on the head. I was so sorry to read that that happened. I hope she’s not suffering any ill effects. Some beautiful photos you posted.

I went to Arizona! Admittedly not very far over the state line but still, it counts, right?

Can’t wait to go back and explore some more places.

Rachel is fine. She had a bit of a stiff neck and shoulders for a few days but nothing serious. Well enough to do her Bikesafe training today.

Looks like you had a fantastic holiday. Shame about the bump on the head for Rachel from which I hope she has recovered.from. Great pictures and write up.