So another early morning ride (Sunday 04/09/22)… to avoid the worst of the tourist traffic. The morning was wet, with some strong showers overnight… a bit intermittent as I set out! Should be a good test for the Oxford waterproofs I picked up second hand… write up to follow.

Heading north, following the coast, is one of my favourite bike routes in Cumbria. Straight out of Ulverston, the variety of roads keeps you on your toes… however, a greasy roundabout put doubt in my mind from the off… this wasn’t gonna be a flyer, steady away and make it back was the order of the day. The roads range from new, grippy black top, to single lane , wet, shiny, shit covered corners where the previous few years of traffic have kicked the surface stones off and polished up the tarmac with two wheel tracks to keep you entertained. (In case I have built up too much tension in the narrative… Spoiler alert… I don’t fall off and I live to tell the tale)

I skirt past Broughton-In-Furness, over the Duddon bridge and swoop through the delightful Whicham valley, turning right at Silcroft, under the Brooding menace of Black Combe. Normally a fast road with views both of the Lake District fells and the Isle of Man, a cloak of grey foreshortens any view to the nearest of hills and oddly, a strong wind whips up the tree leaves to flash their pale underbelly and tries to push me across the road at every gateway or gap in the hedge… it was calm when I set off.

The Esk Valley and Muncaster Castle 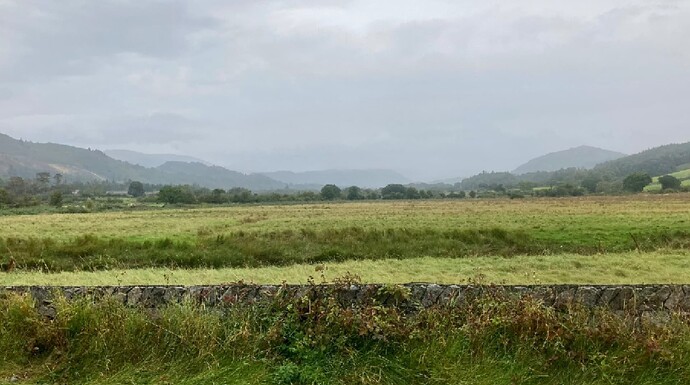 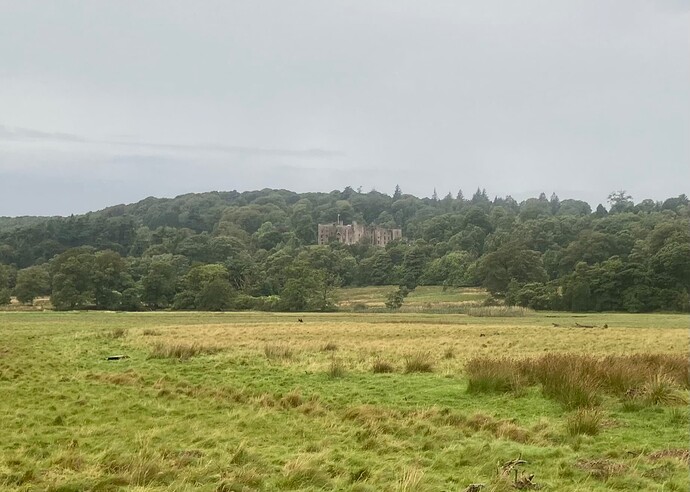 It, of course, brings the rain… showers both light and heavy as it feels fit! If you’re gonna try out waterproofs, you need the wet stuff. As I turn off the A595 shortly after Muncaster Castle, I start to get glimpses of Wasdale valley, my target for today’s ride… a Cul-de-Sac of impressive stature that just keeps growing as you ride towards it. 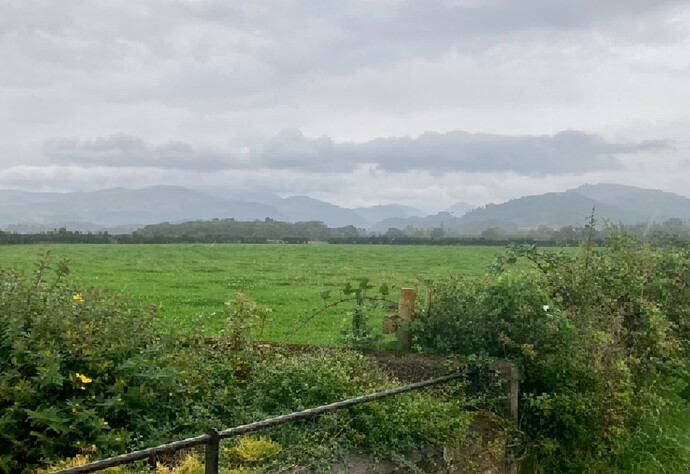 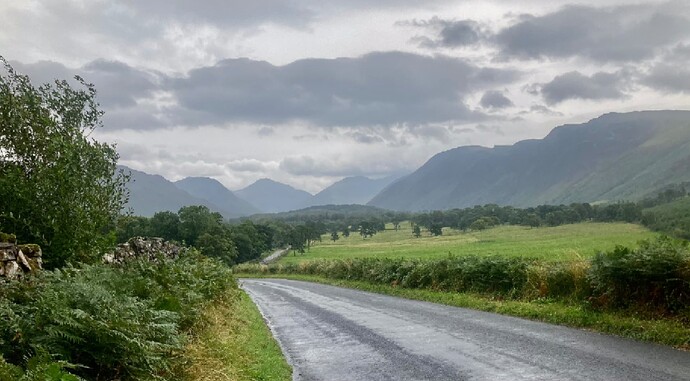 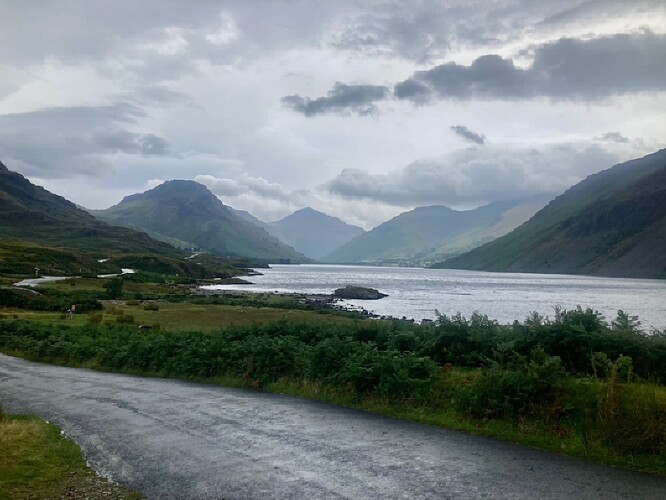 This I where I start to meet other traffic, but still not much really… and I tootle all the way up to Wasdale Head, famed for its claim to England’s highest mountain (Scar Fell), deepest lake (Wastwater), smallest Church (St. Olafs) and biggest liar Will Ritson 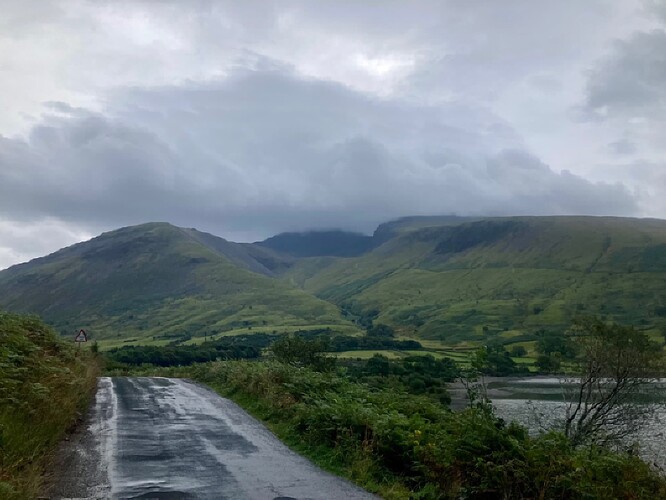 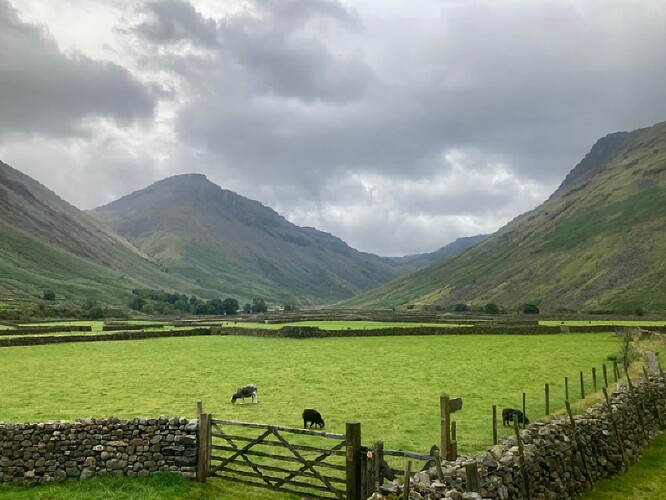 St. Olaf’s church is in the trees 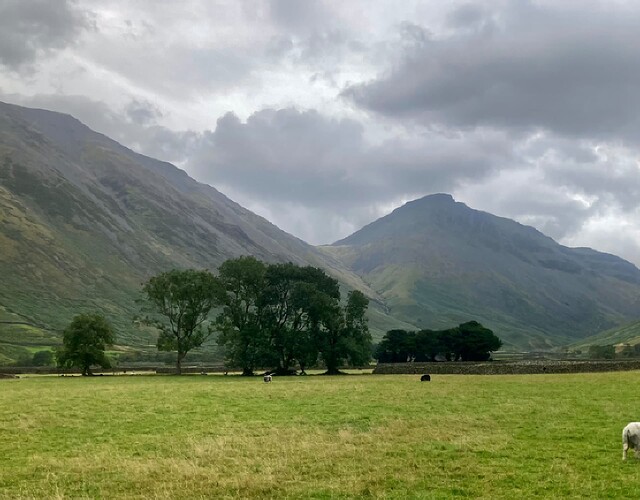 The slopes of Illgill Head into Wastwater. 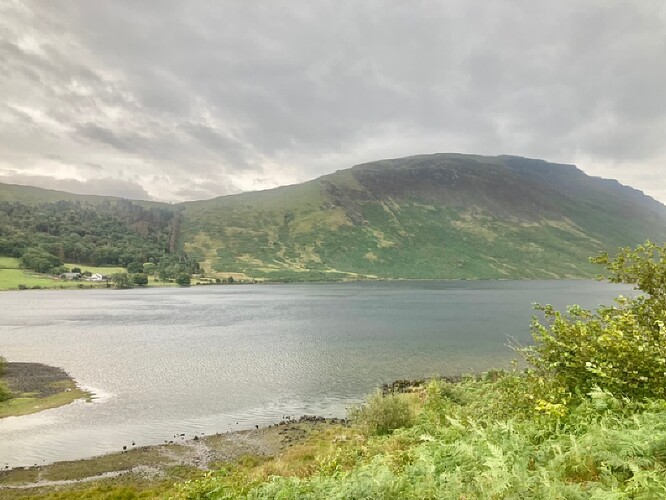 Turning round at the tent metropolis at Wasdale head, the ride back down the valley is just as rewarding, as your eye is drawn to many spectacular features you missed on the ride in. My personal sprinkler system seems to have blown over now as well, which is nice and affects my route choice for the rest of the ride.
I retrace my steps down Wasdale valley as far as Irton Hall, an impressive country pile converted to the task of weddings, self-catering apartments and general hotelery. I didn’t stop for a brew… I didn’t fancy sitting in my moist gear in the breakfast restaurant, but I think I’ll pay it a visit with the ol’ lady!

I head for Wasdale’s parallel neighbour, Eskdale… pronounced “Eshdul” locally, as I’ve decided to go over the passes. Hardknott and Wrynose are both “entertaining” and call for some due respect; I enjoy riding them because my paternal grandfather was one of the fellas who chucked tarmac on it after the war (the war office had used the area for tank training, and totally shagged what road surface there was)
The ride in was pretty uneventful, though beautiful… it looked like a small bike rally had over-nighted at the Woolpack Inn near the top of the valley. The road over Hardknott can be glimpsed through the trees as you get nearer; the pass appears to get higher and steeper too… distance and perspective plays trick on you sometimes. 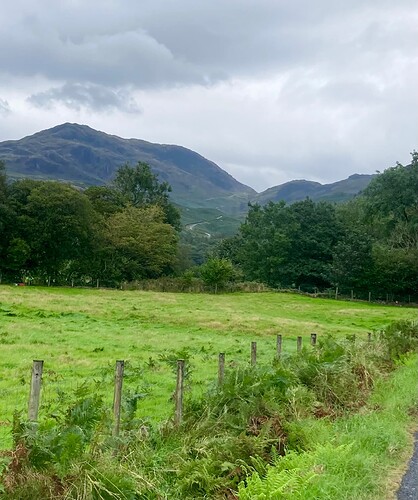 Coming frae Eshdul, the pass has two main ramps up, the first lifts you off the valley floor and drops you off at the level of Mediobogdum… well worth a stroll around if you are visiting the area. The road is steep, shiny and rough as buggery…

And as such, it’s a good warm up for the second ramp, over the shoulder of the pass… getting to 1:3 at a couple of points, with an awful road surface… this is the bit people often get wrong, it gets made worse with the volume of traffic going over it! You really don’t want to get stuck behind Doris in her white Audi TT as she suffers a crisis of confidence. I had it to myself though, so it was fun!

Over the top, you can see the dip in the mountains where Wrynose lies, and can be fooled into thinking that’s your next challenge.

View of the Duddon Valley

Your mistake is soon all too obvious though, as you have still to drop off Hardknott… still wet, covered in sheepshit, the steep corners and lack of surface grit allows you to think unhelpful thoughts… if you let the doubt get the better of you, you’ll brake too hard and prove your doubt right… wobbling to an uncomfortable sliding dismount. I’ve seen it happen on this road a couple of times now. PMA is where it’s at!
Again, I get down to the bottom ok but I’m left wondering about an abandoned car on the really steep bit (photos do not do this justice) I bet there’s a story there… 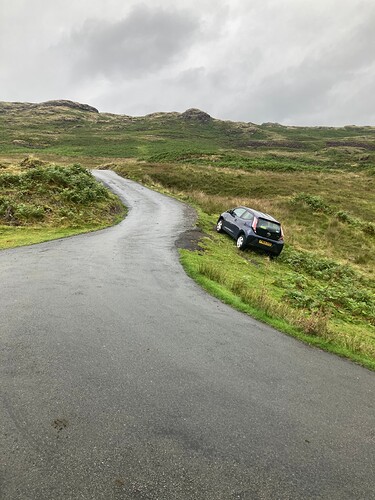 After Hardknott, I turn left at Cockley Beck and turn the screw a little, I love the top end of the Duddon Valley, leading to Wrynose… it’s just so much fun! This side, the pass is short and steep but nothing like Hardknott and I’m soon at the three shires stones and the view down Little Langdale to Ambleside. 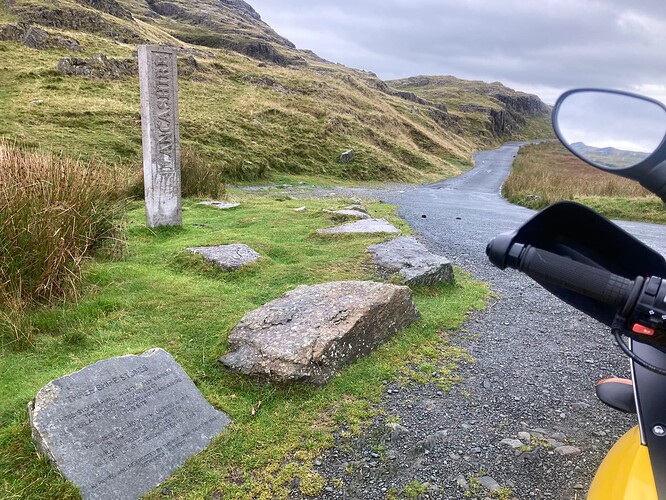 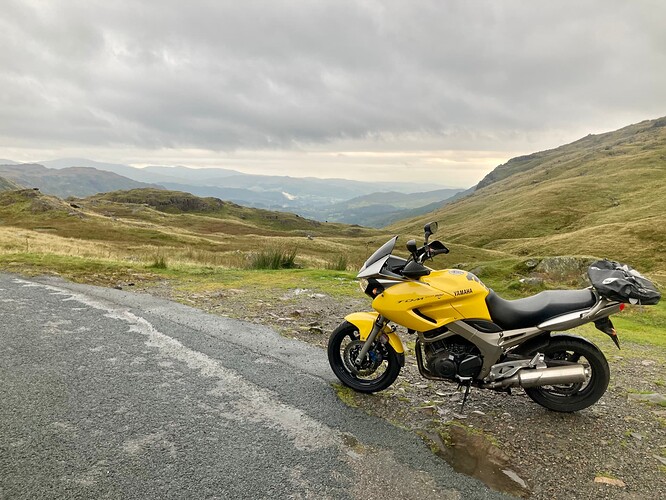 Dropping off into Little Langdale is fun though, a steep pitch followed by a right hander, and then a long ramp with what feels like an edgeless drop down into the valley bottom… my other half hates this section but it makes me grin. At the bottom, you get a glimpse of Great Langdale, Mickleden… and the stately Pike o’ Stickle proudly signposting the Neolithic activity in the region, known locally as The Axe Factory 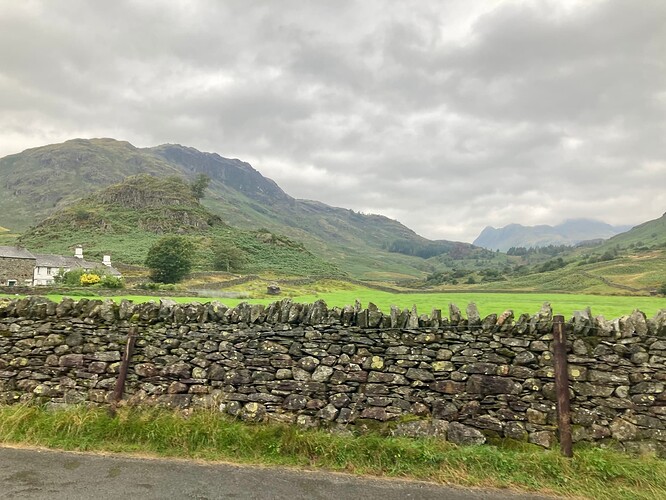 The ride home from here was via Coniston, a lake I’ve covered several times on these pages… and apart from the local “big charity bike ride” the Tour de Furness and the oily drippings from a vintage tractor run, the ride home was quiet and pleasant. 90 miles in total and a great route! 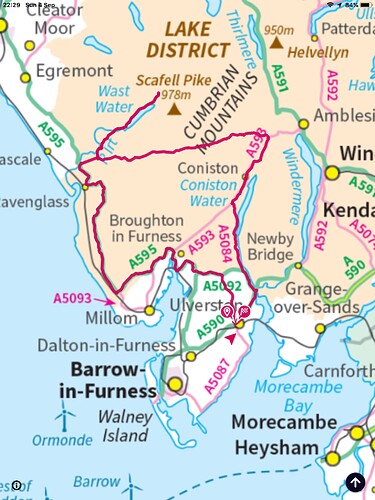 Thanks for this splendid account of a brilliant ride, and with loads of good photos.
I did Wrynose and Hardknott a few years ago, east to west, on a BMW F650GS single. As you say, they are pretty challenging, especially Hardknott, with all the very steep hairpins and a terrible surface. Plenty of opportunities to come unstuck, and plenty of people do. It’s do-able OK if you are not baulked by other traffic, but, if you are, you can be in trouble. I got away with it OK, and I’m pleased to have done it, but I can’t say I’m anxious to do it again!

When I was home, in the evening… the clouds played with the sunset for me! 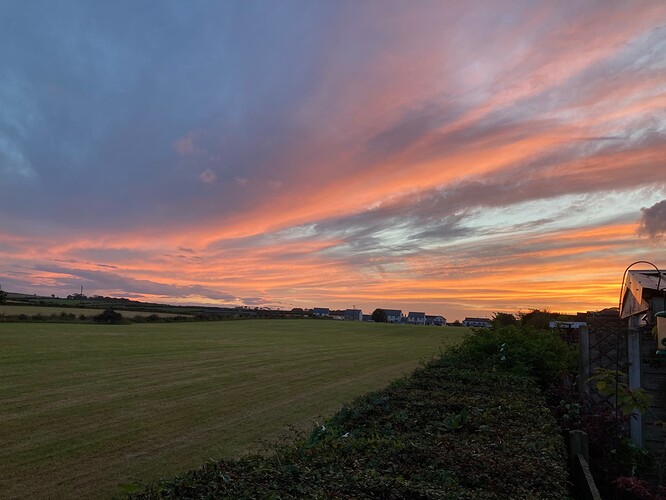 Stunning and very dramatic place to ride. Love your commentry and pictures.

Fantastic write-up and pictures! Thanks for posting

As others have said, fantastic write up and pictures…I have read a few accounts and seen photos of those who have come to grief on Hardknott Pass, I’d like to try it one day (not the coming to grief bit…).

Well worth the experience, Mrs V. Preferably on someone else’s bike…

Aye your very good at putting your trips into words! Along with the great photos

What a superb write up @DCS222

Lived in Cumbria all my life, except when it was Lancashire of course, and never knew that is how Eskdale is pronounced -every day is a school day

There’s an Eskdale in Dumfriesshire as well, which is pronounced Eskdale. Cumbrian false teeth obviously don’t fit as well as Scottish ones…

Same here @Dawsy, Lancashire lad until they moved the border … and that’s how I always knew it! A bit of a surprise to learn about the K… here’s a local sign post… (with an e, not a u) 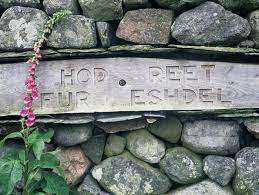 What a wonderfully, evocatively descriptive write-up and pictures! Great work, that man.

Excellent write up of a good trip out despite the weather - bordering on poetic prose!

Good pictures - I wish I could be bothered to get off the bike more often and take more myself.