You’ll need a battery and charger, but this can be used on their other ferex 20v cordless stuff too (I have the hedgecutter which does a decent job and they do other things as well). Well worth the money if you’re after something that you’re not using all the time and this battery is the higher capacity 40/20v one too so will power their 40v range of stuff as well.

Good to know, I’ve bolloxed my drill (they never seem to last more than 2 years whichever make I’ve tried) so I’ll have a look at it.

Been running Ferrex for 3 1/2 years. Can’t fault them at all. Use drill driver all the time, found it brilliant although only use 5ah batteries so they last better. Just trying the 20v angle grinder and that’s a strong tool but power greedy. Also use the impact gun, the 40v chain saw and I’ve a multi tool too which has been dropped a few times​:roll_eyes:. Used to use dewalt but this gear is good enough as I make my living with tools and they won’t get pinched so that could be classed as better​:rofl:

. I’ve now collected 5 batteries @£30 each as I’m a busy busy man. Lead to believe they are made by Samsung so a wolf in aldi clothing!!

I was quite impressed with the cordless hedgetrimmer I got originally. Since I bought it my much more powerful (and far heavier) petrol hedgetrimmer has remained on the shed. The drill I have seems far more powerful than my old Elu one that’s now history. My only gripe is they don’t come with a case, but for the money…

There’s quite a range of those 20v and 40v tools so the idea is you start off with one tool then add others as and when you want to. I started off with the telescopic hedge cutter and got a charger and 2 20v batteries. I’ve since bought a normal hedgecutter and now have both the above drill x 3 and the sds hammer drill too. It just allows you to buy additional tools without having to buy more batteries or chargers if you don’t need then. IIRC the 40v battery will power the 20v stuff but not vice versa

The drills never showed up in my nearest lidl, just the torque wrench which i dont need or an oil pump for £9.99.

I’ve just ordered one online. Grinder, battery and charger were £53.97 with free delivery.
Bargain. Thanks for posting!

Edit: just got the drill too.

I have a dewalt but always nice to have a backup!

You’re welcome. I find having more than 1 drill very useful when drilling pilot holes and using them as a screwdriver as it saves a lit of faffing about swapping drills over

I’ve got got the 20v brushless one already and I did fancy trying the 40v although it’s a big heavy lump that might not work as accurate.

Just ordered the battery and charger, followed by the angle grinder and the impact wrench.
Says you have to spend £30 to get free delivery but whatca bargain.

The other thing that’s not been mentioned with all their diy kit is that it has a 3 year warranty.

Can also recommend their borescope. 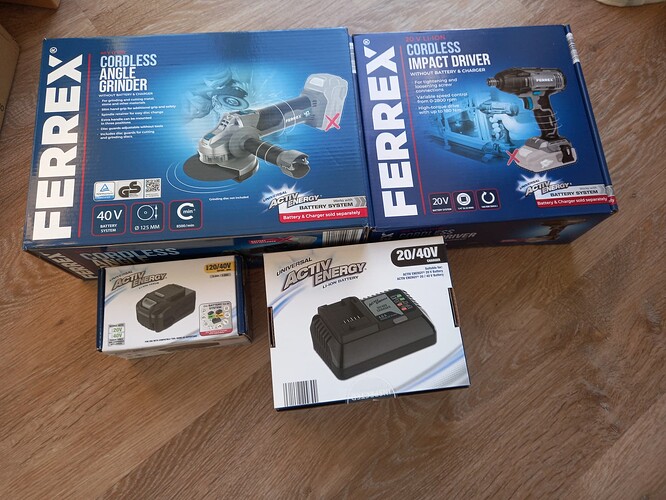 Hope we don’t see an explosion in catalytic converter thefts in your area Steve.

@stevelovatt take it the grinder is without case? I’ve noticed every deal is different as they all come bare but my 20v grinder was also bare but in a case.

Both the grinder and wrench came without a case mate