Anyone seen two sovs a litre yet?

Coming home along the A43 yesterday l saw diesel at 199.9. Anyone seen worse?

Filled up with Shell Vpower on my way to the IOM last Friday and paid 200.05 per litre at my local PS.

Average price at 180.73p, with cost of filling family car threatening to exceed £100 for first time

And this week looks like being another 1,000 miles plus…

It seems that all of the Motorway services are now charging £2.00+ per litre but they have always been greedy Buggers!

With petrol stations and prices available in apps, and many satnavs these days, it’s pretty easy to find a cheaper alternative just off the motorway. Sometimes there are supermarkets within a mile or so that are worth the detour.

Yes. When @Wessa and myself went up the M74 last month we came off at junction 15 to fill up in Moffat and on the way back down on the M6 we came off just south of Carlisle and went to the Tesco 0.4 mile away. You need to think like a Tyke/Scot cross breed these days.

Also you can find nicer places to eat and drink.
Obviously not Tesco.

Yes just a little bit of planning you safe significantly on motorway prices. Mind the way things are going even local petrol stations are going to be over £2 a litre shortly

Over here on the motorways you’ll be paying 2.54 euros per litre which is 2.17 Pounds. At my local garage I’m paying 2.03 pounds a litre.
However employers here are obliged to pay travelling expenses so at my company I get around 450 Euros per month on top of my salary which does help.

That Tesco was my stop off as well when I was regularly driving up to Edinburgh for work.

I filled up the bike with unleaded at £1.77 per litre this evening. 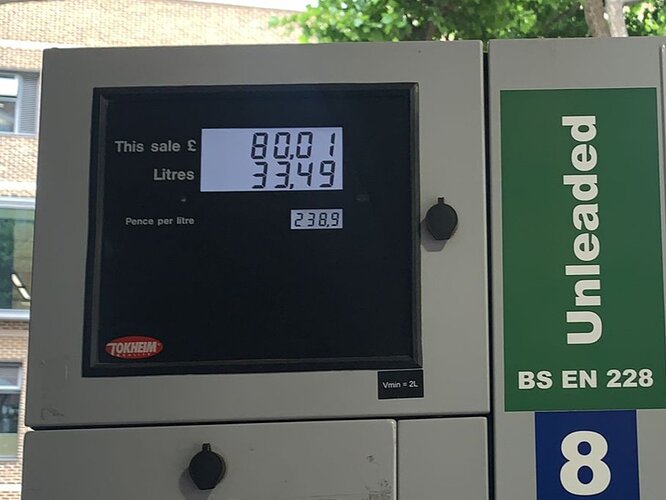 The South Kensington Gulf garage is charging way above the UK’s average petrol price of £1.82 per litre.

£2.00 in bp Ketteringhamshire on Sunday. Tbf, that was E5 but bloody hell…

£2.02 per litre for either E5 or Diesel ?? (Are they trying to make the diesel look a bargain?) Pont Abraham station, where the M4 ends and the A48 starts.

I like it as shell calls it ‘fuel save’ !!
Just come back from Thassos Greece and petrol is €2.50 ltr diesel €1.99 big difference from one to the other and from uk too

Well, here’s a thing. My local Tesco is now 199.9 for diesel. Just blown 124 notes to fill up. Anyhoo, talking to the cashier, she said l was half an hour too late, when it went up 6p a litre. That was the second price increase TODAY!! Assuming there isn’t a delivery every half day, the price they paid for that fuel is cheaper than the current price, so they’re getting a nice little earner off it, it seems to me. Fecking robdogs…

A few years ago (also a tesco) they stuck the price up on the sign just as I was finishing filling up. Cheeky buggers tried to charge me for the higher price. I argued that when I lifted the pump that was the price I agreed to pay. I had to pay the higher price because thats what the pump calculated when I hung it up. It was only a few pence but I was furious. Bloody cross again now thinking back about it