It seems like Tesla drivers have been having lot’s of time on their hands over the Christmas period. 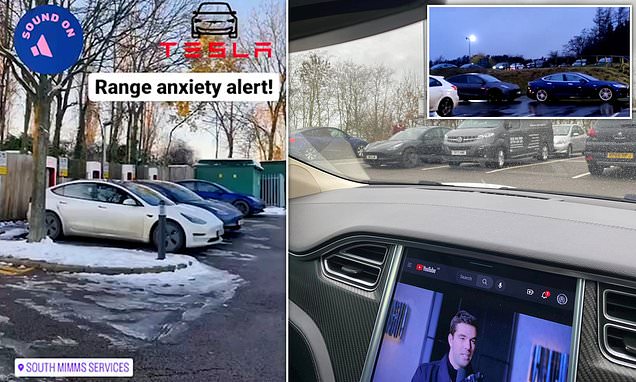 Cars were logjammed up and down the country, with snaking queues spotted in Hertfordshire, Cumbria, Westmorland and Telford.

Eeek, I almost bought a Tesla back in June, thus far I have not regretted sticking with diesel. If you research how DNO’s are now transitioning to DSO it gives an insight into the changes that are needed across the board due to the DNO’s not being the sole providers of electricity anymore.

I’m not surprised to see charging on the open roads a problem for EV drivers. It was a car crash waiting to happen as sales increased and charging points not keeping pace with demand. I won’t be going electric for any time soon.

Eeek, I almost bought a Tesla back in June, thus far I have not regretted sticking with diesel. If you research how DNO’s are now transitioning to DSO it gives an insight into the changes that are needed across the board due to the DNO’s not being the sole providers of electricity anymore.

Nah, DSO = an award and DNO = Do Not Overdo eg gardening.

A friend of mine is a roving engineer, working in hospitals all over place fixing their scanners and whatnot. His company car is a Kia SUV thing (don’t ask me what model, I know nothing about Kias). He said it’s extended his week because of the charging time but also at some chargers it’ll halve his charging rate if someone else pitches up on the adjacent charging point. So in other words, lots to do with the infrastructure.

I still think that ubiquitous electric is not going happen. Artificial (not bio) fuels and hydrogen are still potentially viable.

Also significant that when we get a cold snap, the ranges of electric cars are reduced. One Tesla driver said by half but I’m sure that was not true. My son did say his car range was reduced by around twenty five miles.

A lot of this problem goes away if you can charge at home. Although,. if you’re a two-car family (or more) that may still be the cause of a few squabbles.

My neighbour has a large Mercedes SUV, which is electric. She charges it at work and it takes 11 hours for a full charge compared to half that for a smaller car like a Golf, so it never gets fully charged.

She doesn’t have a proper charging point at home and if she uses the normal supply ie. through a normal socket it takes 3 days!

They’re just not good enough yet to be a real alternative for most folk. The cars and the infrastructure. Imagine the chaos if everybody had one

the cars are getting better at a fast rate and no doubt they will get there, but the charging and energy issues… is that ever going to work? And then the damage to the planet building the dam things!!!

So much for private investment into charging stations, nothing will happen until 50% of cars on the road (not sales figures) are electric, investors are putting the cash where there’s instant returns like oil maybe

I do find it amusing just how Evangelical some EV owners become. I know one who changed his Range Rover sport for a new Tesla. Best thing since sliced bread, goes like shit off a shovel costs nothing to run blah blah blah. I’ve knicknamed him Killowat Cartwright

I shiwed him one youtube vid on a test from Cobham services to Leeds using 2 BMW 4 series, a fully EV and a petrol one and the same with 2 Peugeots coming back from Leeds to Cobham srvices. Filling up at the pumps and public chargers at the service stations in both cases the petrol cars were cheaper and the journos showed the figures. All he could say was “That’s bollocks” really? Open your eyes, the figures were there you just didn’t like the results! I like teasing him about the cost of them to buy too as most people just don’t have 60k to spend on a car and I can buy an awful lot of petrol for the difference in cost between my petrol Skoda and his Tesla. Again it’s lost on him so I did laugh when I saw the news about the queues as apparently some were getting their handbags out and resorting to fisticuffs arguing about who was next as obviously you can fill up normal ICE cars in a couple of minutes while Elon’s deciples face a much longer wait to charge their batteries

I wonder if they all got PCN’s (parking tickets)? When I inadvertently filled my diesel car with petrol at a service station, because it took more than 2 hours I got an automatic ticket. Didn’t pay it but you only get 2 hours in any service station so they may get another surprise soon

Didn’t think of that one very good point and it’s not like they can drive off to another. Lol

Yet another government guideline not fit for purpose! When will people stop sleep walking???

The wonderful government here in Scotland had the bright idea to make their charging points free to use. Woohoo….not, …… all the commercial providers like BP, Shell, PodPoint etc have not bothered to install their charges here because people can get it free down the road. Guess what there are not enough charge points in Scotland. What a well thought through policy.

Most are free but not all. I suspect that free chargers will decline over time. It’s up to the owner of the charging point whether they want to offer it for free. Some supermarkets do, others don’t. Glasgow, I believe, has decided to scrap free charging.

I’m not particularly keen on the relience of the big oil companies to supply all the charging points. I’d rathr it was a more open, devolved market with electricity sold wholesale and cometition between providers.

There are a lot of comments here from drivers of petrol/diesel cars, but not many from EV drivers. I have had an EV for the last 18 months (Hyundai), so as a EV user here is my take on it. I find a lot of petrol/diesel drivers are very negative and quick to point out the obvious disadvantages. I sometimes get tired of hearing inaccurate Ill informed opinions such as “the national grid can’t support the requirement if everyone had an EV” I feel that there are many disadvantages and many advantages to owning and EV, so I think it depends on the individuals type of usage whether buying one would be for them.
For me I personally charge up at home 99% of the time. I get an average range of about 250 miles and that costs me about £5.25 in electricity. When I need to do a long journey it is a complete nightmare. There are not enough chargers and a large proportion of the charges in Scotland are broken. I would not recommend an EV to anyone that needs to do regular long journeys at the moment, but for me I think the advantages outweigh the disadvantages. I find the car faster, quieter and more pleasant to drive, I had a deal, that I’ll not go into, meaning that the car cost me no more than a petrol version. Because the running costs are so low I find that I don’t think twice before taking a trip for pleasure. All in all I’m happy with my decision and for me I think the advantages outweigh the disadvantages, but that is just for me.

If you look at Chargemaster when they first began producing their own EV chargepoints the money was in the number of points on the map and being able to set the electricity tariff to maximize profits not the profit from selling the actual charging points themselves. Chargemaster were eventually bought out by BP.
With Electricity prices being so volatile the likes of BP are winning all the time.

Those who can make massive savings are people who have an EV company car due to the favourable BIC fixed until 2025 and who also have free charging at a work place and use their home.
Lots of small journeys are also an area of potential saving with cars that have less of range and therefore less of an initial outlay outside the likes of Tesla BMW etc….

EV is certainly progressing but generally speaking is throttled throttled by the initial outlay and the access to reliable and affordable renewable energy. There is also the rumoured 8 year warranty on the batteries. What will the maintainability costs be beyond this?
One factor which may make second hand EV’s more affordable is when longer range vehicles are produced which could see a reduction in the cost of the smaller capacity vehicles. finally when will inductive charging be thrown into the mix and what impact will it have?

For me I am waiting patiently until the time is right.

I suspect that for a lot of us on this forum, we do not look too far into the future. Therefore, we consider a good petrol car will last us as long as we are able to/want to drive. So why spend a huge amount of dosh on a new electric car ? If you’re like me, you would have to do an immense number of miles for it to make sense., if at all. Plus I can’t help feeling that the official push to go electric is a repeat of the go diesel fiasco.