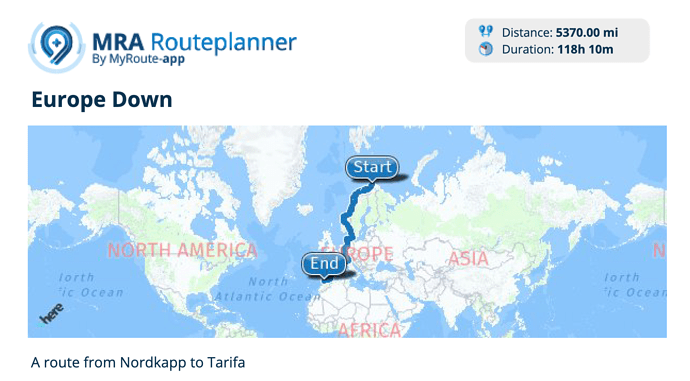 As some of you know, I’m planning a big trip next year, from the northermost tip of Europe that’s accessible by bike (Nordkapp, Norway) to the southernmost point (Tarifa, Spain). There’s a fairly long thread about it on the other forum but all future updates will be made here. I’ve already caprured all the information from those other posts in Evernote so nothing will be lost even if the original thread is lost.

I haven’t posted many updates lately because I’ve had other things to work on but I’m still expecting to be on a bike next summer for the longest single journey I’ve ever undertaken.

It’s good that @TheRevenant has joined here; my next action is to pick your brains about the Spanish leg of the journey!

The route is complete but nor finalised. Everything is being planned in MyRouteApp and I’m happy to share all that information with people if they want to see it, or even export the whole route, with waypoints, to a PDF if you’re interested That document runs to 54 pages, currently!

I was hoping this would migrate across Saul. Wifey and I will be leaving the UK on 21st June for a modest taste of Norway, approx 1800 miles while there and using the new ferry from Holland direct to Kristiansand.

Cheers. I look forward to hearing what you think of Norway, and the new ferry. Everything I’ve seen, particularly the Expedition North videos, makes it look like an incredible place. I can’t wait to see it for myself.

Looking forward to seeing the updates!

How many total miles is it and over what time period. Also, what bike are you planning to use?

According to MRA (see the first post) it’s 5370 miles and I’m trying to keep the journey down to about 4 weeks. That’s probably a reasonable estimation at this point. It doesn’t include the ‘liaison’ stages that get us to the North Cape and home again from Spain. This is about the point-to-point journey for me, so I’d like to reduce the amount of time and distance ridden outside the main trip. There’s still some…negotiation going on with my travel buddy at the moment. He’s talking about riding up through Sweden. I want to freight the bikes from Oslo to Lakselv.

I can safely say I won’t be taking my MV Agusta Superveloce on this trip.

Now I have my Street Triple back (Rachel had it for a year after passing her test) I’ve been reminded of how comfortable and fun it is to ride. So I could be taking that, if I can set it up to take enough gear. I want to travel as lightly as possible but I’m not going to get away with a toothbrush and a credit card on this one. If the Triple doesn’t work out then I’ll maybe try to pick up an old Tiger or something like that.

Sounds ambitious on a Street Triple!

Nick Sanders rode around the world on an R1. Surely Europe on a Triple is feasible.

Of course. I’ve been to Spain on my little Gumpmobile, aka Bonneville SE. Got some Oxford throwover panniers you could have, borrow for a tryout sometime if you wish…they’re red too, as all Triumph triples should be

Did they make a red Street Triple? I know you had that red Speedy, and very nice it was, too. I was very tempted when you put it up for sale.

Thanks for the offer to borrow the throwovers. I’ll certaily keep that in mind. My concern with luggage is the high level exhausts. I prefer my pants not to actually be on fire.

Are you around this evening to talk Spanish routes?

Well actually l’ve got to go and fetch my son’s dogs, a bit more of a task now he’s moved 30 miles away. I’ll message you in the next day or two.

Sure, no rush at all. You’ve got my number - give me a shout when you have some free time. Cheers!

I’ll try and get hold of Alan this week as that’s where I’d got to. Still a whole load of logistics to work out as well. The forum is taking up quite a bit of time at the moment but I’ll get to it.

Street triple will tour with ease. Like you say, it’s comfortable and fun. I’ve done 330 mile days on mine with no soreness or complaints. I used a 40 litre roll bag bungeed to the back seat and a tank bag. For bigger tours get a bigger roll bag, I’ve seen up to 60 litre readily available.

Sounds like a fantastic trip. Wouldn’t mind joining you. I’ve done the Nord Kapp a few years ago and it was amazing (chilly but amazing). Went in August and did 8000km round trip.
Which month are you planning to go.

Current plan is to go around about June. I’ve been getting invaluable advice from @Erling about Norway and I think that was his recommendation.

It’s my intention, once I have a proper route and itinerary, to ask anyone along who’d like to ride at least part of the route, so you’d be most welcome!

June sounds like a good month to go as August was already getting quite cold up in the north. The scenery is breathtaking the more north you go

I’ve been watching the Got2Go videos on YouTube and it looks like a spectacular country. I can’t wait to go.

As I’ve done a lot of Norway, including Lofoten Islands and Nord Kapp I may just join you guys for the southern leg which would be a new trip for me. I’d really like to do Norway again, but in my motorhome next time.
Still loads of time to think about it.

We’ll be visiting Lofoten. We have a route roughly following of the Atlantic coast and fjords. I’ll publish a more detailed map on here sometime soon. I’ll also put it in the forum’s complimentary MyRoute App group.