Mods and upgrades you REGRET AND SHOULDN'T have done

Well, we’ve all been there…
Spent the money and then tried it/ stood back and thought “holy f”!k, thats terrible."
Mine? That was the triumph satnav module/update/upgrade on the speed rs.
Totally a waste of money and ruins the speedo layouts with others that are simply ok if you are 10 and like videogames.
And, i’ve turned it into a bit of a tarts handbag with too many anodised bits if i’m honest with myself.
What’s your one chaps/chapesses??

To date I can honestly say there are no upgrades, which I regret.
The only one which I initially had mixed views about was the rear spring colour on my Thruxton R.
Ohlins yellow, which is now black. It was changed due to my weight nothing to do with aesthetics in any event the part is still Ohlins.
All other modifications I have made involved genuine Triumph parts so whilst I am far from adventurous you could argue I play it safe but all I have done is enhance what is already a beautiful piece of engineering already.
I always pay a premium Triumph or not, which I think reduces the chances of regret.

The Rickman handlebar fairing on my 400/4. Looked dreadful and bike started tankslapping like a bastard. That didn’t last long, but it was a long time ago, not had any really dreadful errors since.

Painted a spare tankset on one of my MZ Skorpion sports which is a factory cafe racer in the ‘replica’ colour scheme style in pearl white/grey/gold. The tankset looked better off the bike than on as it had a bland silver grey frame and engine. Ended up putting the bright red set back on.

Can’t think of anything offhand other than a few overly loud exhausts. Have you ever went to trade or sell a bike and put it back to standard, take it for a ride and think, I like this better now? Thats happened me a few times! Not sure if its just sellers remorse.

Definitely right on the exhaust.
I have a scproject stubby on the srs and I know that it’s not as much torque as it should be as standard.
Love the looks and sound though so it’s staying!

I had twin arrows on my 1050 speed, there was a noticeable difference in low to mid grunt just by removing or installing the baffles!

Built this, it was just…well, poo. And an all round poo at that 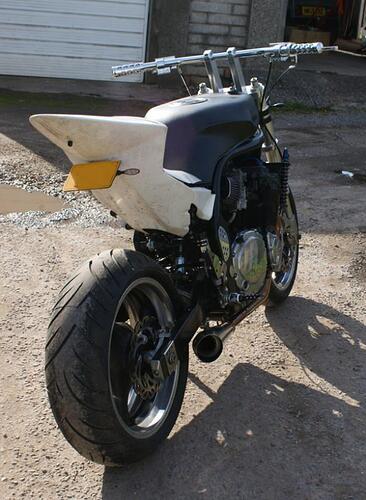 I tried to remove the baffles (i cut out the disks ok) but f")ked up the end of the pipe.
Turns out that some are welded (removable ) and some aren’t …

Ah mine was the earlier model 2016. But the pipes were off the previous model again wich were still removable, only a tack weld on a screw holding the baffle.

Got to go back quite a few years, mid 80’s had my BMW R100S for a few years went everywhere on it and really enjoyed it, so kept reading motorcycle mags on how to improve handling. Ended up with stiffer fork springs and a fork brace… ruined the handling, it was far better in stock trim. Lesson learned so I’ve stayed away from suspension mods ever since. If I want a better handling bike, I’ll buy a different one…!

Bet you wished you still had it now though?
I had to have an er50 suzuki with a mostly duct tape (silver ffs!) seat…
The bike was red…

Oh yes, my Brother had one of those Rickman fairings on his Red 400/4 back in the 80s and it was still white so didn’t even match the bike!! I likened it to Elephant Ears, while I rode around on my much cooler RD350LC

My biggest modification regret was when preparing to replace my Trophy 900 subframe to fit a CRK Cafe Racer Kit. I misread the instructions by not turning the page and cut 25mm too low with my angle grinder.

You know what they say, always measure twice, cut once and RTFM!! man_facepalming:

When I was 18 years old, at uni in the late 60s, I had an old Venom which lived in the hall of residence car park. I took a notion to fit a fairing to keep off the winter weather. I bought an old one from a breaker for a couple of quid, but it had no fittings to attach it to the bike. Having no idea, no money, no skills, no facilities, and no tools apart from a few spanners, I bought a length of Dexion (pre-slotted steel angle for those too young to remember it), cut it up and attached the fairing to anywhere it would fit. One ten minute ride demonstrated that it shook, rattled and wobbled so horribly that I took it off immediately my guardian angel got me back, and never tried to fit it again.

Well, I had a KTM RC8 arse end, a Bandit frame and a GSXR 750 engine hanging around, so I glued them together. 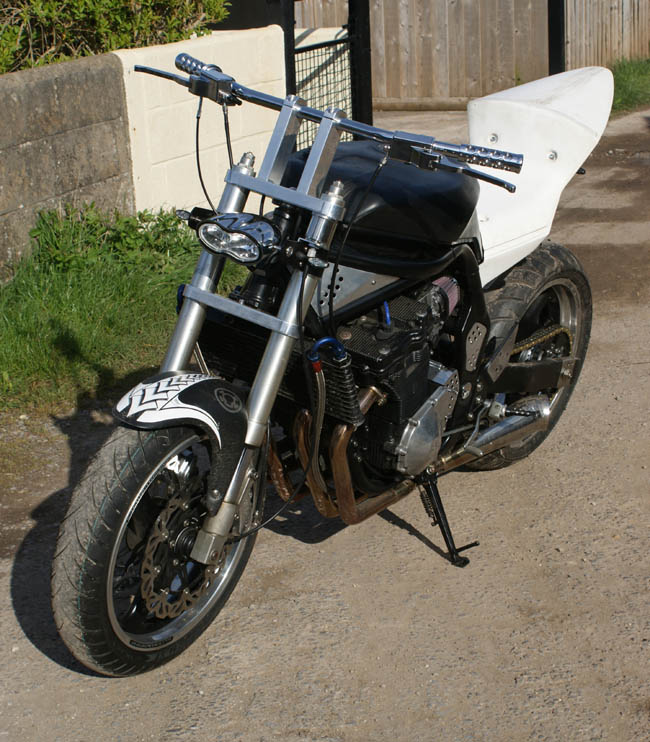 Only a mother could love that😲