Out with the old Honda and in with the new……

So bought a VFR800F a couple of years ago and couldn’t quite get used to the awfully hard seat and slight sports bike stance. This is because I’m an old grandma who shouldn’t have bought a young persons sports bike, so this morning signed the deal on a new Honda Forza 750 scooter/bike thingy with a DCT transmission. I pick it up in a couple of weeks.
I’ve hardly used the VFR and it’s only got 1900kms (a whisker over 1000 miles) on the clock.

I had a VFR750FL back in the early 90’s Nikki and good as the build quality was I found it wasn’t that comfy and over long distances it was tiring to ride. That was before the Adventure Bike was really invented so it was that, a full tourer or a sportsbike. I ended up getting a blade and because it was about 40kg lighter it was far less tiring to ride (and more fun). Enjoy your new bike, you clearly haven’t gelled with the VFR.

It’s a beautifully built bike oozing quality and style but it’s just plain uncomfortable. I couldn’t conceive of doing any touring on it. I think the new bike will be much better and perfect for my 120 round trip home to work commute especially with the auto transmission. They seem to get good reviews too.

I bought friend’s VFR800 when he moved to Spain. Bargain price and the bike was mint. Trouble was, I didn’t really like riding it. Maybe I was over the whole sports-tourer thing after having a Thunderace for so many years. 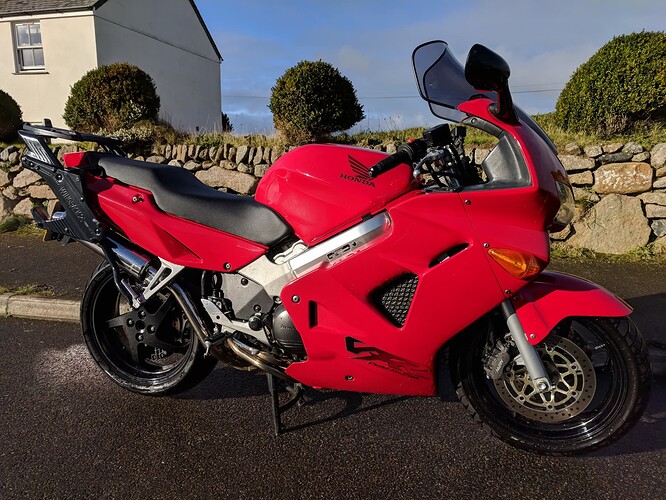 Some people love them. I just think I’m too old for that type of bike. Give me my VStrom over it any day of the week. Nice upright riding position, super flexible engine with loads of torque. Mind you I’ll miss the extra noise and boost when you hit 6500 rpm. It’s like my old Street Triple in that it’s super easy to lose your license.
Love the red on yours

Good luck with the new bike Nikki. I’ve had two VFRs and probably done 25-30,000 on them, l found them comfy and really good bikes. Preferred the red gear driven type l had, same as @Octoberon. The VTEC always seemed a bit flighty. Neither is in the same class as a 1050 Sprint. But as l said, all the best with the change.

The Forza 750 looks like a good combination of motorcycle ability and scooter convenience, it also seems to get really good reviews.

I quite like the Honda X-ADV ‘adventure’ scooter - it looks a lot of fun, but it seems a lot of money when you could buy a Tiger 900 for similar.

Yes that’s true, both the Forza and XADV are expensive but I wanted a big scooter and an automatic. I’ve had a Burgman 650 but they were a bit thirsty and they don’t make them anymore. I’m hoping the Honda will work out ok for me.

Hi Nikki, Hope you’re well. I’m surprised you’re commuting, I thought you would have retired again by now. I take it you are enjoying w*%k. ?

Hi Andy, I’ll keep on going till they give me the boot. My contract runs out in August but it all depends on if there is enough work if I get an extension or not, but I like the work and my colleagues so I hope I can stay on and the money is useful too.
Hope you are well too.

Hi Nikki understand you decision on a comfortable auto for commuting, hope you did not take a hit on your vfr. So you are still enjoying work, good for you.

You always take a hit when you trade in Steve, but at least I’ll have a bike I can use for work and it’ll be also good for touring too which will give Waspy a break.
All the reviews I’ve read/watched on the Forza say how impressed they are especially with the DCT transmission.
The dealer will easily sell the VFR as it must be the best in the country especially with one lady owner, 1000 miles only on the clock and not a mark on it (except for a few midges).

Yes it can be painful, given used bike prices did you consider selling it privately?

I did, but not for long. Too much hassle. I got a reasonable amount for the VFR and to be fair probably couldn’t have asked for much more selling privately.

We’re all getting old Nikki - only upright bikes for me from now on!

Tried it once with the Rninet Racer - silly boy!

We’re all getting old Nikki - only upright bikes for me from now on!

Pfft! Speak for yourself. 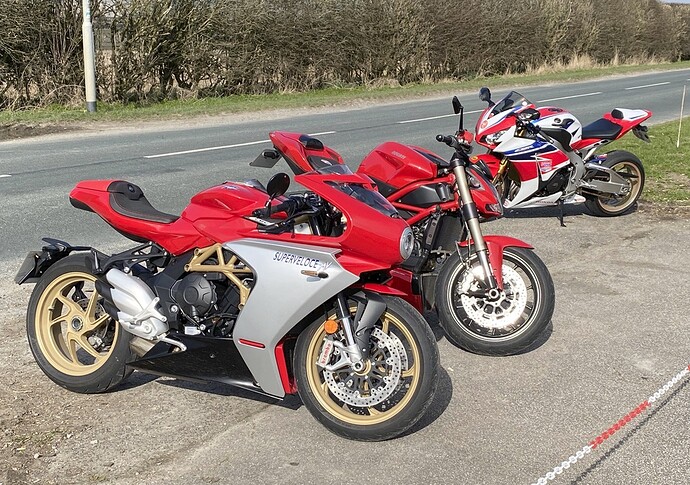 So, got the new bike. My sexy but uncomfortable VFR is gone.
Photos tomorrow.
First impressions are that it’s comfortable and I do rather like the DCT gearbox. Due to the quite wide seat, I’m on tippy toes when the bike is stationary but as I’m a bit tall I can manage.
Everything is electric, including the top box (you press a button to open it). Even the steering lock is electric. You just turn the bars fully to the left and turn the start/stop control knob to the left and it’s locked. I’ve not played around with the different rider modes yet, but I will after it’s run in. I’ve left it on Standard.
You need a Honda App in order to take advantage of navigation, music etc which then appears in part of the TFT screen. It doesn’t show you a map just direction arrows.
The optional heated grips are integrated into the TFT screen so you just press a button on the bars and it shows the heat setting on the screen.

I was originally going to get a second hand 650 Burgman but I’m glad I’ve gone for the Honda as the Burgman is old technology and the Honda is bang up to date.