I’m quite pissed off with my power washer. Does anybody know of a decent one?
I’ve had two Karcher’s, a cheap £100 one wich packed up after a year and a more expensive one at about £300 wich didn’t last much longer. I managed to fix the latter but its starting to show signs of failing again. I always release the pressure after use etc. Also the hoses are
crap. in the colder months (about 9 of them) they are hard and tangle constantly. There must be a better option out there, does anybody have any good reccomendations or is everything absolute crap nowadays?

I am reluctant to use it every clean as I am unhappy spraying water near any connectors. It isn’t the highest pressure so it is easier to control over the electrics.
I can clean the bike with two buckets of water and one battery charge. It works for me.

I have been using the Kärcher K7 for a number of years and am generally quite happy with it. If your major gripe is the hose, be aware that if your current machine is still operable you could just buy Kärcher’s anti twist hose, article # 6.396-336.0.

I’ve got a Nilfisk Centennial which I’ve had for years. The good thing is the pressure isn’t too great and it comes with 2 heads so you can get a really soft spray. Don’t think they do that one anymore but this looks to be about the equivalent

was not aware of an anti twist hose! The problem is when its not 20° the rubber is not supple and its just a bastard to keep straight. Every time you go to the other side of the vehicle you have to first walk away and get all the loops out of the hose But aside that, the machine itself is sounding sick, noisy, rattling, cutting out and starting again. I think the pump is failing and I am not happy with it. Like I said, its the second one thats failed on me (3 if you count the fix) so I would really rather not go and buy another Karcher. I see they have grey ones that are supposed to be professional??? I have a feeling that the yellow ones (like most things today) are built to last for X amount of hours and designed to be replaced. Pisses me off. I do use it quite a bit having two cars and two bikes to wash. Quite fancy one of those petrol engine ones, surely they’re built to last! But also £1000 quid and probably overkill for use on a bike. at least you can control the flow down to a trickle on the electric ones.

Three vehicle would probably be a bit much for a single battery on the Worx washer but additional batteries are available. The hose is easy to remove and place in warm temperature to keep it pliable.

I bought a Muc-Off Power Washer 2-3 years ago and use it for the Motorbikes, Mountain bikes and cars. It has never let me down. 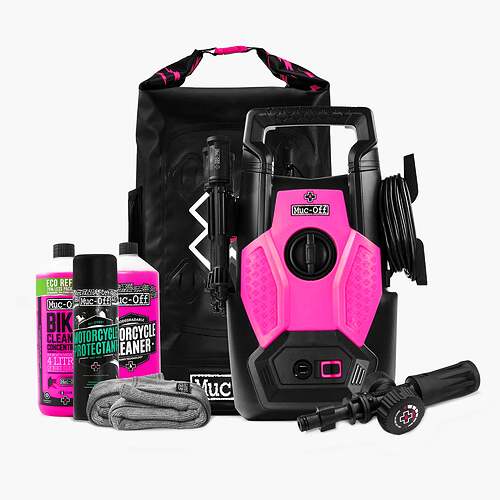 Introducing the world's first Pressure Washer built purely for use on both bikes and motorcycles. We've designed and tooled three specific lances to ensure the Muc-Off Pressure Washer won't damage those all-important bearings and surfaces.

I’m on my second Karcher. The first one started leaking badly from the body of the machine. I found some good information on the net about what the problem is likely to be and how to fix it but I just couldn’t be bothered to go to all that effort in the end. I bought a K4 after doing some online research and the Karcher kept coming out as the best brand. I’ll give them one more chance. If this one packs up I’ll not be buying another Karcher.

The stiff hose is a bit annoying to straighten out but it’s a fairly minor gripe for me. If you really want to waste some time, add a snow foam lance and try to work out how much mixture to put in and how much to turn the mixer knob.

We have Karacher power washers at work, the big diesel ones, they just dont last. Constant repairs then replaced. Time and again.

Thats what I hate about reviews. They test all the newest gear and say which is the best. They don’t keep them for years and then tell you which ones fail after lots of use. The Karcher probably is a top performer, I have no complains there. But they can’t tell you which ones are prone to failing. I’d happily take a slightly lower performance machine if it was going to last longer. Thats why I asked here to find some real world experience.

After a bit of searching I see you can get an entry grey professional Karcher model for around £350, the same price as many of the mid/upper range yellow ones. That might be worth considering? Also found a Hitachi petrol one for just under 400. The blurb on the pro Karcher goes on about quality components in the pump and robustness so that may be my answer. Definitely not buying another yellow one!

9 of the 12 Which best buys are Nilfisk if that helps any. I would link it but I don’t think you can access it if you are not a subscriber (I steal my Dads login

I got this Spear and Jackson jobby… pretty good except the patio attachment… which is shit. Not as controllable as some perhaps, but does what I need.
(Another point of note for longevity… ALWAYS run water through the full hose system before turning the electrics on, the pumps are designed to shift water, not air)

Hope you have better luck with the Spear and Jackson washer than we did with their hover mowers. Had 2 and both packed up, switch failure and cant get a spare anywhere. I thought S and J was a top brand but apparently it is now Argos own brand. Never again.

Had it a year or so now, but not massively used tbh. I had a Krapsure which went boobs-skyward. I couldn’t even get into it without a set of Torx screwdrivers that are about 180mm long (or summat similar)

Yes my Karcher was crap too. Bought a Nilfisk, (weighs a ton compared to Karcher) never missed a beat.

Using a karcher no real problems with it.

They make them so we can’t get into them to repair them. I had to buy security torx bits with a small hole in to open the switches of my hover mowers.
Ive had a Karcher, cheapo Lidl washer that broke and was returned after a few months and now using an aldi one which seems fine but not as powerful so we will see.

. Actually the Spear and Jackon a few posts ago is a good example. When I started working, Spear and Jackon was the hand saw to have! A man came round to the workshop every week to take tools away for sharpening. You just gave him your saw and it came back like new the following week. Now though even hand saws are disposable. You throw them away when they get blunt and buy another piece of shit stamped out of a machine in China. And they’re constantly banging on about recycling! Fecking go back to making things that last. Another one… my mother has an electric carving knife, must be 30 year old now and still works like new. I recently saw an old episode of bullseye (loved that show) and there it was, my mums old electric knife was one of the prizes